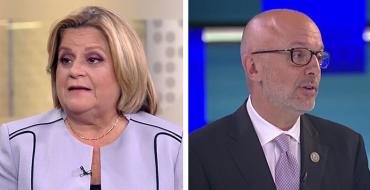 As she readies to retire from Congress after almost three decades, U.S. Rep. Ileana Ros-Lehtinen, R-Fla., was able to land one last jab at the Iranian regime this week as the U.S. House passed her resolution “condemning Iran’s human rights violations, particularly its persecution of its Baha’i minority, and urging the administration to impose sanctions against the Iranian regime for its human rights abuses.”

Ros-Lehtinen, the first woman to ever chair the U.S. House Foreign Affairs Committee and currently the chairwoman of the U.S. House Middle East and North Africa Subcommittee, teamed up with U.S. Rep. Ted Deutch, D-Fla., to bring out the resolution in April 2017. Deutch, the top Democrat on the Middle East and North Africa Subcommittee, has often worked with Ros-Lehtinen on legislation focused on the Middle East, including taking aim at Iran and backing allies like Israel and Jordan.

The House passed Ros-Lehtinen’s resolution without objection on Wednesday.

“Iran’s Baha’i community is a frequent target of the regime’s human rights abuses, subjecting adherents to arbitrary arrest and harassment, denying employment, refusing to recognize marriages, and destroying cemeteries and holy places," she said after the resolution passed. “By passing Ted’s and my resolution, Congress is sending a strong message of support to those suffering in Iran and making it clear that those responsible for this persecution will be held accountable. I urge the administration to continue using all tools at its disposal, including sanction authorities with human rights provisions, to bring an end to these abuses.”

“The Iranian regime perpetrates some of the most egregious human rights abuses against its own people, including denying them freedom of religion, persecuting minorities like the Baha’i, and imprisoning LGBT people," said Deutch when he first sponsored the proposal in April 2017. "The United States must continue to stand squarely against these violations of basic human rights, including by strictly applying and enforcing existing sanctions and strengthening punishments for offenders. This resolution sends a strong statement to the abusive regime that its treatment of the Baha’i, its unjust repression and persecution of Iranians, and its imprisonment of U.S. and other foreign nationals will be met with a strong response.”

A similar resolution, introduced by Republicans Marco Rubio of Florida and John Boozman of Arkansas and Democrats Dick Durbin of Illinois and Ron Wyden of Oregon, cleared the Senate at the end of last year.

"‎For decades the Iranian regime has discriminated against and brutally persecuted members of the Baha'i community,” Rubio said last year. “Baha'i educators, business owners, and community leaders have been targeted, including the Baha'i Seven who have been unjustly imprisoned since 2008. The lack of religious freedom in Iran for Baha'is and other peaceful religious minorities cannot be ignored."

I am glad that this HR was

Permalink Submitted by Frank Morra on December 14, 2018 - 7:36am
I am glad that this HR was supported as strongly as it was on a bipartisan basis.