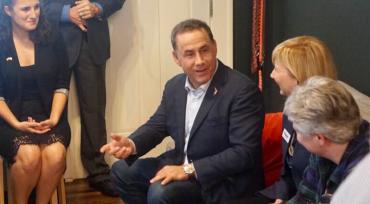 It’s been less than a year since Miami Beach Mayor Philip Levine gathered his city workers and political allies for a rally against popular homesharing site Airbnb, but with a bid for governor in mind, time has apparently healed all wounds -- or given Levine amnesia -- when he held a campaign event at a home in Jacksonville which also doubles as an Airbnb home.

Levine is currently running for governor as a Democrat and is touring the state to get to know voters, hosting events at various homes along the trail.

Levine’s “Live From Living Rooms” state tour made a stop in Jacksonville Wednesday to talk about climate change but the location couldn’t have been more ironic, since it was held at the home of a couple who rented out their home -- at least part-time -- on Airbnb.

According to Florida Politics, the event host said she and her husband split their time between Jacksonville and another city, but rent out their Jacksonville home when they are out of town.

Levine and the homesharing site’s relationship is complicated, to say the least. The two have never seen eye-to-eye and have engaged in all-out publicity warfare in the past.

Airbnb argues Miami Beach is unfairly punishing homeowners in the area who rent out their residences illegally. Fines for renting illegally have skyrocketed to $20,000 in Miami Beach, a jump from $500 over a year’s time.

That amount only doubles, then triples and continues for repeat violators who rent out their properties “illegally.”

Airbnb told Sunshine State News it had never seen any other city slap renters with such high fines -- in New York, illegal renters face a $7,500 fine.

Last year, a Sunshine State News article detailing the costly penalties sparked a controversy between the site and Levine, which ultimately turned into a very public battle which involved angry social media posts, protests and even legal action.

Unhappy with Airbnb voicing their concerns, Levine launched into a Twitter tirade, slamming the platform in a series of tweets last March.

In another tweet, Levine went on to say he opposed Airbnb because he believed short-term rentals “destroyed neighborhoods and buildings.”

“The mayor has always said he likes the company, but Miami Beach residents don’t want it there,” Ulvert told Sunshine State News Wednesday. “It’s really a local control issue and one that should be decided by local communities.”

Airbnb, meanwhile, said it was more than happy to have one of their homeowners be selected as a pitstop for Levine’s campaign and said it appreciated his ironic support.

“We are glad to welcome Mayor Levine into the Airbnb community,” Airbnb spokesperson Benjamin Breit said.

What difference does it make

Permalink Submitted by Richard Paul De... on January 26, 2018 - 9:56pm
What difference does it make Miami Beach is too far EAST to understand people west of the high water line; is it true if the high water line increases ...more "beach will be owned by the residents of Florida"....what happens if we encourage Global warming? will those building in the water get a tax break? The sooner climate change is accepted as a good thing the better democrats will be. They waste so much time on this fear...yet the rock that will just miss the earth by 2.6 million miles is not at problem? Seems Democrats need a new tax to cover rocks falling from light years away. Flood insurance should be required for all those Miami Beach properties and anyone purchasing a Miami Beach property should be advised of the high water line during 2016 and 2017.

Permalink Submitted by Tampaguy on January 11, 2018 - 1:59pm
Sure, Levine --- got to move away from people doing the right thing for Other people. Like Airbnb really affects Florida a LOT. Where did you get your "friendly" attitude? Probably Karl Marx.