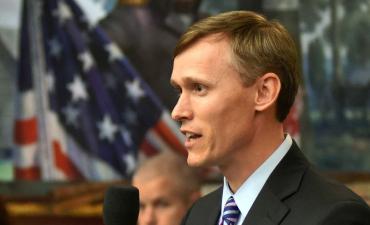 State Rep. and Attorney General hopeful Frank White rolled out two new endorsements in his bid for the Florida Cabinet on Thursday.

Two county sheriffs announced their support for the Pensacola Republican, saying he’s the best bet to lead the legal system in the Sunshine State.

“I am proud to stand with Frank White because I know he will stand with Florida’s men and women in blue to enforce the rule of law,” said St. Johns County Sheriff David Shoar. “Frank has proven he will defend our conservative values and protect taxpayers’ hard-earned money.”

Shoar has a lengthy career in law enforcement, serving in the field for over 30 years. He was first elected to the office in 2004 and wasn’t the only law enforcement professional to give his stamp of approval to White.

“Frank will be a staunch defender of our Second Amendment rights, will help law enforcement keep our families safe and will protect the constitution at all times,” said Putnam County Sheriff Homer Deloach.

Deloach was elected sheriff in 2016 but has been with the department since 2001.

White jumped into the Republican field for the job late last year but has already showed he’s serious about the race, already putting $1.5 million of his own money into his campaign.

He is currently matched up against fellow state Reps. Jay Fant and Ross Spano for Republican nomination as well as former Hillsborough County judge Ashley Moody.

White surpassed the $2 million fundraising mark at the end of 2017, raising over $100,000 for his campaign in December.

White’s Republican opponents Jay Fant and Ashley Moody have both raised over $1 million for their campaigns but haven’t yet reached the $2 million mark. State Rep. Ross Spano has $99,000 in his campaign and committee accounts.

Recent polling suggests the race is anyone’s game at this point, with no clear frontrunner among the candidates, but White’s financial situation puts him in a strong position to make a mark in the crowded field.

White says his ability to connect with voters from all walks of life will be another boon to his AG bid and thanked the sheriffs for their endorsements on Thursday.

“As momentum grows for our campaign, my proven record as a consistent conservative is resonating with folks from across the state and I am honored to have the support of these great Sheriffs who share my conservative values and commitment to both our constitution and the rule of law,” he said.