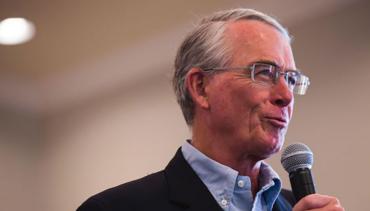 In the aftermath of last month’s mass shooting at a high school in Parkland which left 17 dead, freshman U.S. Rep. Francis Rooney, R-Fla., unveiled his proposal to limit mass shootings.

Rooney unveiled his proposal on Monday.

“We need a multi-faceted solution to mass shootings and gun violence which includes all relevant layers of government and local communities, and includes putting safeguards in place to minimize the chances of these events occurring at all, and to stop an incident which is in progress to minimize the damage,” Rooney said. "We can take actions to make it harder for an unstable or dangerous person to get a weapon and invade a school, theater or restaurant, but need to confront the negative societal trends in contemporary American life. Violence in entertainment and the media, and the breakdown of family and community, have consequences for contemporary America and are related to the rise in gun violence we see today.”

As the first part of his plan, Rooney called for President Donald Trump to back “the Fix NICS Act, which penalizes federal and state authorities that fail to report relevant information to the National Instant Criminal Background Check System (NICS).” Rooney’s office insisted “the sex offender database offers an analogy here, where states are required to share information for proper background checks and demonstrable results have been achieved."

Rooney also urged the federal government to enact a Violent Threat Restraining Order (VTRO) system “that balances the need to interdict dangerous people while preserving due process." The Southwest Florida Republican also called for limiting access to schools and bringing in armed guards from the ranks of retired law enforcement officers and veterans.

Turning to gun sales, Rooney called for ending private sales and ending exceptions on background checks, insisting “no gun sale should occur without a complete and thorough check.” Rooney also urged the federal government ensure a three-day waiting period on all gun sales, ending the sale of bump stocks and increasing the age for purchasing a firearm to 21 years old which, Rooney’s office noted, “is currently the law for pistol purchases.”

First elected to Congress in 2016, Rooney currently serves as the vice chairman of the House Foreign Affairs Committee. He also served as President George W. Bush’s ambassador to the Holy See.

I agree with some of this

Permalink Submitted by Catherine Price on March 19, 2018 - 6:16am
I agree with some of this plan. However, the most obvious issue of banning high capacity weapons and clips is conspicuously absent. Why does the NRA have such a strangle hold on this debate?

Aside from increasing the

Permalink Submitted by Boca Boomer on March 6, 2018 - 7:58am
Aside from increasing the legal age to purchase 'guns', this measure falls woefully short of focusing on the core issue of mental health. I do not know what the scope of unstable people getting out patient treatment for a variety of diagnosis are, but I would venture to say its in the hundreds of thousands, if not millions. The real culprit impeding a workable solution is not the NRA, it is the AMA who have already courting the public's opinion by saying requiring mental health practitioners to report patients with coping or emotional issues or worse to a central registry preventing them from obtaining a deadly weapon. A re-write of patient confidentiality laws needs to be done and hold these 'professionals' accountable for failing to disclose the identify because they do not wish to stigmatize them. There's no stigma being refuse a purchase as no one will know but the unstable individual and the retailer who does not allow the transaction. Only then can this issue be properly addressed.