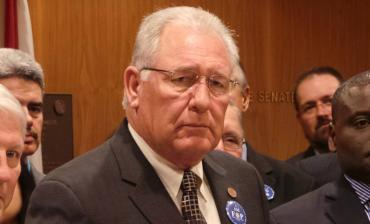 Evers was driving his car and appeared to suffer a heart attack Monday evening.

The Florida Highway Patrol said Evers failed to negotiate the curve of the road, traveling across the southbound lanes. He then collided into a guardrail, after which the truck he was driving continued through the guardrail and into a creek where then it went underwater.

The wreckage was found Tuesday.

Evers was the only passenger in his vehicle.

An investigation of the crash is ongoing.

“On behalf of the family of former state Sen. Greg Evers, it is with great sadness that we announce his passing,” said spokeswoman Sarah Bascom. “The family asks for your prayers as they deal with this sudden loss.”

"Greg passionately represented his district for many years in both the House and Senate," said Senate President Joe Negron, R-Stuart. "He was especially dedicated to the men and women of his community who were serving or had served in the military, as well as our fellow Floridians across the state who serve as Corrections Officers."

Gov. Rick Scott said he was "heartbroken" over the news.

"A dedicated public servant, Senator Evers truly loved Florida and devoted his life to serving his community – not only on his family farm, but during 15 years representing the people of North Florida in the state House and Senate," Scott said. "He will be remembered and missed by all who knew him as the kind, hardworking farmer from Milton who tirelessly fought for Florida families."

"Senator Evers was a passionate and dedicated public servant in the Florida Legislature for 15 years. He was an ardent supporter of our military, our Constitutional rights and an advocate of returning the power to the people. We extend our deepest condolences to the Evers family, and pray for peace during this most difficult time.”