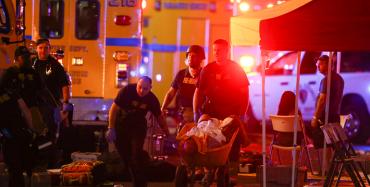 At least 50 people were shot dead and more than 400 were injured when a gunman opened fire on a crowd attending a country music concert in Las Vegas Sunday evening.

The shooting is the deadliest mass shooting in modern U.S. history, topping last year’s attack at a gay nightclub in Orlando.

Country music star Jason Aldean was performing when shooter Stephen Paddock opened fire, spraying the crowd with round after round of bullets from the 32nd floor of a nearby hotel before police found him. Paddock shot himself before law enforcement officers arrived, Clark County Sheriff Joseph Lombardo said.

Paddock, 64, once owned a home on Florida’s Space Coast. He lived in a 55-plus community in Melbourne called Heritage Isle Heritage Isle, residing there for two years between April 2013 and May 2015.

Here’s how Florida politicians and leaders reacted to the news Monday morning:

"My warmest condolences and sympathies to the victims and families of the terrible Las Vegas shooting. God bless you!"

Gov. Rick Scott (via Twitter)
“Ann and I are praying for Las Vegas and all the innocent lives senselessly taken.”

"Praying for all those affected by this senseless tragedy in Las Vegas."

"Thoughts & prayers are with the victims of this horrific attack. At some point we, as a society, have to stand up and say enough is enough."

U.S. Sen. Marco Rubio, R-Fla. (via Twitter)
“I’m praying for all the victims, their families, and our first responders in the #LasVegas #MandalayBay shooting.”

"Terribly saddened to wake up to news of so many killed & injured in Las Vegas. Prayers for all at the scene, their families & loved ones."

Florida House Speaker Richard Corcoran, R-Land O'Lakes (via Twitter)
“Our deepest condolences and prayers go out to the victims and families of the tragedy in Las Vegas.  #PrayForLasVegas”

"Sending prayers to the victims and those wounded in Las Vegas. Heartbreaking."

Tallahassee Mayor and Democratic gubernatorial candidate Andrew Gillum
"The mass shooting in Las Vegas last night was horrific and senseless. Our law enforcement and first responders acted heroically. It’s both tragic and maddening that any part of our country can be turned into a war zone so quickly. May our prayers inspire our actions."

Former U.S. Rep./Democratic gubernatorial candidate Gwen Graham (via Twitter)
“Utterly horrific news from Las Vegas. My heart aches for the victims, families & survivors. We must do more to stop this senseless violence. Grateful for the first responders and law enforcement who stopped the shooting and risked their lives to save others.”

"My thoughts, prayers & condolences to victims & families in this horrific tragedy, what looks like the deadliest mass shooting in US history."

U.S. Rep. Charlie Crist, D-St. Petersburg. (via Twitter)
“My heart aches for all of the victims of the tragic massacre in Las Vegas. This is senseless, unimaginable. God bless our first responders.”

"This morning's news is so horrific. We grieve for the lives lost and pray for their families, the injured, first responders, docs & nurses."

“Leah and I were heartbroken to hear of the tragic events that claimed so many lives in Las Vegas last night. We are praying for all who were affected by this tragedy. Thank you to all of the officers and first responders who immediately took action. Their bravery saved countless lives.”

"Last night, Las Vegas suffered a terrible attack. A gunman opened fire on innocent people at a concert, killing many and injuring many more. As a nation, we are grateful for the response of law enforcement, first responders and the brave men and women who risked their own safety in order to protect and assist their fellow Americans. My thoughts and prayers are with everyone affected by this tragedy."

“The news from Las Vegas is heart-wrenching. My thoughts are with the victims, their families and our brave first responders during this extremely difficult time. From one community touched by senseless gun violence to another—we’re here for you.”

"My thoughts and prayers go out to the victims and their families affected by the mass shooting in Las Vegas."

"God Bless the victims of the tragedy in Vegas. We are praying for them & their families.  TY for the  actions of Vegas law enforcement."

"Today America woke up to the worst mass shooting in its history and we are devastated. Our thoughts and prayers are with all of the victims and their families who are suffering unimaginable loss. Thank you to our first repsonders for their courage and swift action. We are heartbroken. Our love, support, and deepest condolences to everyone in the Silver State."

A tragedy for sure and a lot

Permalink Submitted by The Trapper on October 3, 2017 - 8:45am
A tragedy for sure and a lot of dead and injured people with a lot of miserable and grieving people left to pick up and carry on. Harvey, Irma and Maria tragedies that left a lot of dead and dying. The earthquake in Mexico killed and maimed. They were all natural. A man did this Stalin killed 20 million. Hitler close to 10 million. Its life and it is not always clean and pretty. The progressive left, predictably, have their panties in a wad screaming, in unison, Gun Control! 3,500 shot and 800 killed in Chicago every year. All black on black with the help of illegal gang members. Not a word or action from left except defend sanctuary cities. Ya

Lot's of praying. As I do

Permalink Submitted by Robert Warner on October 3, 2017 - 7:55am
Lot's of praying. As I do here. How about doing something about incite and fear mongering politics and military style modified weaponry. And the forthcoming "silencer" movement needs to be addressed for those who must live today and tomorrow.