Tyndall Air Force Base on Tuesday

Political efforts are increasing to support the quick rebuilding of hurricane-damaged Tyndall Air Force Base and to keep the federal government from abandoning the economic engine in Northwest Florida.

Members of the Florida Defense Support Task Force, a legislatively mandated panel within the economic-development agency Enterprise Florida, expressed a need Thursday to expand support from the state’s congressional and legislative delegations.

Despite Pentagon officials on Monday saying they intend to rebuild the base, where pilots train to fly the F-22 stealth fighter, concerns linger that the 29,000-acre facility in southeastern Bay County could face downsizing or closure. The base employs about 11,000 military and civilian personnel.

“We’re just trying to get that put together now in the form of a formal declaration from all of our delegation across the state,” Neubauer said.

Neubauer noted that President Donald Trump flew over the base Monday as he toured damage from Hurricane Michael, which made landfall Oct. 10 in nearby Mexico Beach with maximum sustained winds of 155 mph. Tyndall evacuated all but 93 airmen assigned to survey the damage and help reopen the base

“(Trump) did not specifically say, ‘Hey, we’re going to rebuild the base,’ ” Neubauer said. “But we’d sure like to hear that.” 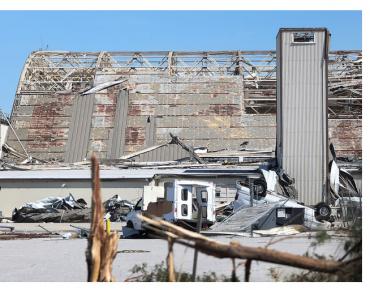 State Sen. Doug Broxson, a Gulf Breeze Republican and member of the Defense Support Task Force, said he’s given a tour of the base to incoming Senate President Bill Galvano, R-Bradenton, and has invited the rest of the Senate for similar visits.

“We need to show that we’re proactive here in preventing any disruption of our military commitment,” Broxson said. “I don’t think we need to be staying overnight, because there is no place to stay. But we certainly need to let people understand the significance of what we’re going through.”

The concern for state officials is Tyndall could follow the path of Homestead Air Force Base, which was heavily damaged by Hurricane Andrew in 1992 and subsequently became an Air Force Reserve base.

The New York Times reported Thursday that the wreckage at Tyndall “shows how climate change may be putting billions of dollars worth of sophisticated aircraft at risk during storms like Hurricane Michael.”

F-22 takes off from Tyndall days before the storm

Structural engineers from Lockheed Martin were sent to inspect an undisclosed number of F-22 Raptor stealth fighters --- each valued up to $339 million --- that were left at Tyndall during the storm, according to a tweet from the contractor. The planes had been left at the base for maintenance and safety reasons.

The Air Force announced Wednesday that it is committed to returning critical personnel to Tyndall. The gates were first opened Wednesday to military members, civilian employees and dependents for the first of five days of limited access to evaluate personal property.

The task force meeting was held Thursday as Gov. Rick Scott toured the damage at the base and tweeted his support to “assist them with anything needed to recover.”

Neubauer said the advisories he’s gotten is that restoration of the base “could be double digits in terms of months.”

A year ago, the Pentagon put a $3.4 billion value on the facilities at Tyndall and projected its annual economic impact --- combining payroll, expenditures and jobs created --- at $596 million.

Permalink Submitted by Ted Kruze on October 19, 2018 - 11:05am
Chuckle, chuckle, chuckle. The 'Trump Organization' may well try to finagle a 'deal' to rebuild it, especially if their finagle involving the FBI building in D.C. doesn't work out their way! (When it gets rebuilt, they should include a very large illegal immigration detention center with all the necessities, including provisions for unaccompanied minors and so-called 'families'.)

Fight to keep it open //don't

Permalink Submitted by frank Nero ..Sanibel on October 19, 2018 - 10:33am
Fight to keep it open //don't let it close or be reduced in scope like was done to Homestead AFB after Andrew