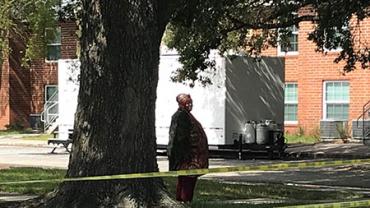 Al Lawson and Marco Rubio
“For more than three weeks, the 790 residents have been forced to live without gas and hot water -- with no rapid solution in sight,” Lawson’s office noted. “Property owners Millennia Housing Management LTD were forced to shut off the gas lines leaving residents no way to take hot showers, cook meals or properly clean their clothes. Millennia brought in trailers equipped with showers for resident use, which requires tenants to leave their homes and bathe in the parking lot. According to the owners, the gas is not expected to be restored to the apartments for approximately three to four weeks.”
The congressman called on HUD to “intervene to ensure that residents, who want it, are provided with temporary housing and transportation until the gas is restored to Valencia Way.”
“My concern is that the residents of Valencia Way, who are still paying their full rent, are treated with the utmost dignity and respect during this difficult time,” Lawson said. “They, like most Americans, want a clean, affordable and safe place to call home. Sadly, the current conditions the residents are forced to live with do not meet that mark.”
The old Eureka Gardens project was on U.S. Sen. Marco Rubio’s, R-Fla., mind when he continued his efforts against slumlords earlier this year when he brought back the “Housing Accountability Act.”
Back in May, Rubio and U.S. Sen. Todd Young, R-Ind., reintroduced the proposal which, they insisted, “would hold property owners of low-income housing accountable for poor living conditions.”
Rubio’s office weighed in on what the bill does. “The legislation would require residents of private properties that have Section 8 Housing Assistance Payment (HAP) contracts to be surveyed twice a year in order to determine the existence of persistent problems with a property’s physical condition or management,” the senator's office noted.
In bringing out the bill, Rubio took aim Global Ministries Foundation (GMF), a familiar target for the Florida Republican. Going back as far as 2015, Rubio has ripped into GMF’s handling of public housing properties, including Eureka Gardens, Stony Brook in Riviera Beach and other facilities across Florida.
“This important legislation builds on my efforts to help those suffering in substandard HUD housing and ensure tenants feel secure in speaking out about unsafe, unhealthy living conditions,” Rubio said. “Slumlords, like Global Ministries Foundation, have preyed on low income housing residents for far too long while stealing taxpayer dollars, and it’s long overdue that Congress held them accountable for their despicable actions.”
“Fixing the current housing crisis is a main priority in my Fair Shot Agenda. It is very important that tenants have the opportunity to report issues with their rental property without fear of retaliation from the owner or landlord,” Young said. “The Housing Accountability Act will empower tenants to report issues such as lead poisoning or structural deficiencies directly to HUD for closer review. This will ensure bad actors are held accountable and help maintain a suitable living environment for all Americans.”
“The Housing Accountability Act (HAA) codifies sanitation standards and requires the Performance-Based Contract Administrator (PBCA) of properties receiving Housing Assistance Payments from the Department of Housing and Urban Development (HUD) to administer a semi-annual survey that allows tenants to report problems at their property,” Rubio’s office noted.  “The secretary of HUD would have the ability to refer properties for remediation or fine owners of neglected Section 8 properties based on the surveys and PBCA observation. The revenues generated from the fines may only be used to improve the conditions at the property or finance tenant relocation. Lastly, the HAA requires HUD to submit a report to Congress detailing the capital reserves for Section 8 properties and how these funds are used for purposes other than maintenance and property improvement.”
This is not the only bill Rubio has dealing with slumlords. In April, Rubio brought back the “HUD Inspection Process and Enforcement Reform Act" which, he insists, will “improve the federal housing inspection process, hold slumlords accountable for misusing taxpayer dollars and ensure they are not endangering the health and safety of tenants.”
In bringing out that bill, Rubio came out swinging again at GMF.
“Low income housing residents have suffered at the hands of slumlords like Global Ministries Foundation who were able to get away with their despicable scheme in part because of HUD’s lax oversight,” said Rubio when he brought out the bill this week. “This legislation will protect vulnerable residents from these despicable slumlords and hold HUD accountable for the deplorable living conditions that too many Floridians have had to face.”
This bill “allows the Department of Housing and Urban Development (HUD) to remove certain HUD employees from civil service or reduce the grade or pay for misconduct or performance." The bill also protects whistleblowers and “allows the secretary of HUD to better enforce safe and sanitary standards in federal housing and requires HUD to publish housing reports that detail inspection scores of facilities, as well as actions taken to protect the health and safety of affected tenants.”

'Public Housing' has been a

Permalink Submitted by Anonymous on October 29, 2019 - 11:19am
'Public Housing' has been a political failure and a focus on incompetence since the term was first invented.

Tear these buildings down.

Permalink Submitted by Phyllis Ross on October 29, 2019 - 9:50am
Tear these buildings down.