Fall-Guy Rick Scott to Florida Counties: Do Not Limit Access to Beaches 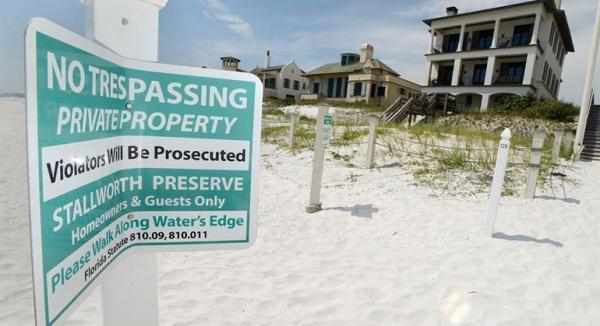 Signs like this aren't allowed in Walton County anymore, but Walton is Ground Zero for HB 631 turmoil

In an executive order issued Thursday, Gov. Rick Scott called on counties not to limit the public's access to beaches, and he directed the Department of Environmental Protection to make sure it happens.

Executive Order 18-202 is all about "confusion" over HB 631, sponsored by Sen. Kathleen Passidomo, R-Naples, and Rep. Katie Edwards-Walpole, D-Plantation. The bill passed the Florida Legislature with an overwhelming bipartisan majority and the governor signed it in March.

“Florida is home to the world’s best beaches, and every Floridian and visitor has the right to fully enjoy our state’s natural resources," Scott said. "Florida beaches belong to all of us, and people from across the world visit Florida because of them -- and we are going to keep it that way.

"Last session, HB 631 was passed with overwhelming support from both Democrats and Republicans. Unfortunately, the legislation has now created considerable confusion and some have even interpreted it as restricting beach access. I’m committed to keeping our beaches open to the public and this executive order makes this commitment clear.

“Today, I am ordering the Department of Environmental Protection to do everything in their power to advocate to keep our beaches open and public. Also, I am putting a moratorium on any new state regulation that could inhibit public beach access and also urging local government officials to take similar steps to protect Floridians’ access to the beach. Government’s job is to help solve problems, and in Florida, when there is an issue or confusion surrounding legislation, we take action to address it. Florida is the most beautiful state in the nation. We have hundreds of miles of pristine coastline and we are known for having the best beaches across the world. We absolutely cannot do anything that changes that.”

1. It imposes a moratorium on executive state agencies adopting any rule or restriction to inhibit the public’s access to Florida’s beaches, unless there is a clear risk to public safety;

2. It directs the Department of Environmental Protection (DEP) to serve as an advocate for the public’s right to public beach access. This includes establishing an online reporting tool so Floridians with concerns about beach access can provide input. DEP will compile this input and submit a report to the Florida Legislature and the governor before the next legislative session. DEP will also serve as a liaison to local governments to ensure the public’s right to access the beach is protected;

3. It urges all local government entities to not adopt any rule or ordinance that would restrict or eliminate the public’s access to Florida’s beaches. The governor is calling on every county in Florida to not take any action that limits access to beaches; and

4. It urges state attorneys in Florida to protect Floridians’ constitutional right to access the beach.

Let's be honest. The governor didn't have to issue this order. He did it because people didn't understand the new law, they were making him the fall guy and he needed to make sure his and the bill's intentions are perfectly clear to Floridians.

A governor doesn't write legislation. He doesn't get to amend or change anything presented to him in a bill. But he is the head of state, and as such, political controversies invariably come back to haunt him, particularly in an election year. In this case, however, the Legislature was solving a huge and growing problem in new pockets of the state. Scott knew it. On top of that, Rep. Brad Drake and Sen. George Gainer, the two legislators representing Walton County in the state's northwest, where all the confusion started, voted for the bill. Something else a governor looks at very closely before he signs it.

Few Floridians outside the legal profession are familiar with the term "customary use." It's what this issue, this law, is all about. Customary use refers to public access to private beachfront property. Generally speaking, beachfront property owners in Florida own the "dry sand" area leading down to the mean high tide line -- the average of all the high-water heights observed over a period of several years. The land seaward of that, commonly known as the "wet sand" area, is held by the state in trust for the public.

The legislation didn’t change “customary use,” it simply provided a judicial process for counties and private property owners to follow, something that streamlined what previously was a lawyer-enriching circus -- a kind of death by a thousand cuts of unending litigation. This was all new to Walton County. In all, 35 Florida counties have coastlines (see the map here.) Some of them had been through the entire appropriate and researched process with their waterfront private property owners. Not Walton, which cried foul after the bill passed, bringing negative attention to itself and to the new law.

The counties that had given themselves a head start, incidentally, were exempted from the bill because they had their process in place.

In plain English, all HB 631 does is block local governments from passing ordinances that would allow continued public entry to privately owned beaches -- even when property owners may want to block off their land. Instead, any city or county that wants to do that has to get a judge’s approval first.

Bill co-sponsor Edwards-Walpole told Sunshine State News, "I hope counties like Walton will take advantage of HB 631 and pass a constitutional ordinance that will protect the public's ability to use private land, consistent with the customary use doctrine."

If the governor's executive order does nothing else, it should put anxious minds to rest -- particularly the vocal minority who don’t understand the streamlined judicial process laid out in the bill. That would include business leaders and tourism officials across the state. Those folks have lamented in over-the-top interviews in the national and global press about “communities at war” over beach access.

Now, nearly two weeks after the law went into effect, Drake has announced town hall meetings (July 16 and 17) on the customary use in Walton County. Some fear his meetings will cause more confusion than clarity. The sheriff, the county commissioners, the state attorney and many others have attempted to quell the public and explain the situation. All without much success.

Within two hours of Scott issuing his order, Walton County Sheriff Michael Adkinson, Jr. took to Facebook Live in an effort to mitigate the public outcry and return Walton to calm. The sheriff, the peacekeeper, does at least keep trying.

Rick Scott is a lame brain

Permalink Submitted by Danny Lightfoot on August 20, 2018 - 9:50am
Rick Scott is a lame brain politician who is going to kill the tourist business in Florida. I bought a home here for beaches and now there are few places I can even get to the beach in Walton County. Most of our services are paid for by sales taxes and who pays most of those sales taxes? Tourist!!!! He apparently got his pockets lined along with other in our state to do something so stupid. The situation is almost at riot levels and now he is running for a Senate seat where he can make more stupid decisions.

If he wanted to make it clear

Permalink Submitted by true cracker on July 13, 2018 - 9:40am
If he wanted to make it clear and stop any confusion all he had to do was veto the law, but since it originated in his home district from Passidomo with his approval to limit beach access to his and his buddies beachfront properties in Naples, he could not do that. Now that there is the expected public outcry, he issues a worthless executive order to try to save face and make it seem like he is doing something when he is not. Then this ridiculous Midwesterner wants to talk about Floridians and Florida like he is one of them. Being rich and buying beachfront property does not make you a Floridian bozo, you might be a property owning tourist, and hell you might even be able to buy enough votes form idiots (most also not from Florida) to be elected Governor, but you will never be a Floridian fool...

Absolutely correct on all

First off there is Fed law

Permalink Submitted by jerry on July 13, 2018 - 8:20am
First off there is Fed law that says up to the spring high tide mark, is public access. That is usually the most shoreward weedline normally with lots of dry sand...……... Next I doubt any Fed built beach can be banned from the public as the real high tide line is back where it was before rebuilding the beach...……………. The state can say whatever they want but these were among the first US laws made, the right of passage...………... Same goes for any river, stream, creek, etc one can get a canoe up, the right of navigation.

I grew running up and down on

Permalink Submitted by David Luther Wo... on July 13, 2018 - 8:10am
I grew running up and down on Grayton Beach in Walton County. Those folks who started this "dog in the manger" approach to beach ownership are those folks my mother used to describe with a three-word portmanteau.

What I witnessed over July

Permalink Submitted by Mimi on July 13, 2018 - 8:04am
What I witnessed over July 4th on the beach in Walton county was disheartening. It appeared that some homeowners were selling the access to the beach in front of their homes. We had to walk an extra 1.5 blocks to get to the chairs that we rented because the beach closest to us was only "available" to one beach rental company. The area where we were "allowed" had chairs set up 6 rows deep while the restricted area was virtually empty. As a Floridian but a tourist to this area this situation would make me think twice about visiting Walton County beaches in the future-- even though we've been vacationing there for over 20 years. I'm glad Rick Scott put an end to this nonsense.

Volleyball anyone? Ricky if

Permalink Submitted by Ocean Joe on July 13, 2018 - 7:27am
Volleyball anyone? Ricky if you don't behave somebody's going to whup you with a sugarcane stalk!

Permalink Submitted by Robert Warner on July 13, 2018 - 7:22am
"Fall guy", sure.... Thinking on behalf of the public interest has never was one of Scott's basic attributes. Playing on ones"gullibility" has been. https://en.wikipedia.org/wiki/Gullibility, https://www.justice.gov/archive/opa/pr/2003/June/03_civ_386.htm

"Now that I'm running against

Permalink Submitted by Claude Kirk on July 13, 2018 - 6:12am
"Now that I'm running against that old dried up astronut Bill Nelson my views on public beach access have changed!!! We shall open up the beaches to everyone!!! (1a) Even in front of some incredibly wealthy folks palatial mansions who happen to be Democrats or have failed to support me in one way or the other. Now we can all agree on that!!!" 1a. With the exception of certain areas around Naples and Palm beach which heretofore shall be exempt from public access. Furthermore I may carve out additional exempt locations [even for dirty leftist liberals] based on the dollar amount of campaign contributions which come into my fund within the next 45 days. rs