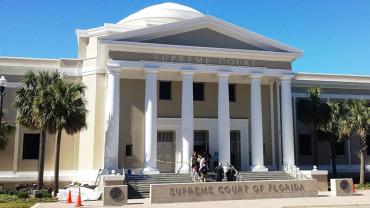 Attorneys representing nine county school district boards made last-pitch arguments last week to persuade the Florida Supreme Court to hear their challenge of a 2017 state law that, among other actions, required districts to share revenues, including property taxes, with charter schools.

In a 13-page brief, the districts maintain that their School Board of Alachua County Florida v. Department of Education lawsuit is about ensuring “local control over local schools by local representatives answerable to local voters.”

The school boards filed a notice in late September that they wanted the Supreme Court to hear their case after a Leon County Circuit Court judge upheld House Bill 7069 in January and the 1st District Court of Appeal rejected their appeal, ruling in August that local districts funding charter schools in their jurisdiction does not violate the state constitution.

"The fact that the school boards in Florida continue to have a role in the operation of charter schools supports our conclusion that HB 7069’s capital millage provisions are constitutional," Justice Joseph Lewis, Jr., wrote.

HB 7069 mandates local boards allocate a portion of capital revenues to "schools of hope" charter schools, which are established in continually low-performing areas of school districts.

The districts say HB 7069 forces them to pay for schools outside their control and supervision.

The boards asked for an injunction blocking the implementation of the statute when 14 school boards signed onto the original lawsuit.

The eight county school districts still engaged in the lawsuit – Alachua, Lee, Bay, Broward, Hamilton, Orange, Polk, St. Lucie, Volusia – argue in their appeal to the Supreme Court that the high court has “discretionary jurisdiction" in reviewing a matter that “directly conflicts with decisions of the Supreme Court and other district courts of appeal on the same question of law.”

The districts maintain HB 7069 violates two articles of the Florida Constitution relating to the raising of revenue, both locally and from federal funds. They say private charter schools not under public school district control should not receive money raised for public schools.

That argument was dismissed by the 1st District Court of Appeal on its August rejection of the district’s appeal.

John Haughey is the Florida contributor to The Center Square.

Good luck with your new job

Permalink Submitted by Anonymous on October 22, 2019 - 10:48am
Good luck with your new job Hillary. Glad to see you've found something more related to your skill-set.

If these School District

Permalink Submitted by Anonymous on October 21, 2019 - 6:36pm
If these School District Boards don’t recognize, by now, the Charter school success upon students (“across America), then those School District Board Members should RESIGN and stop accepting lagniappes from Teachers UNIONS, both local & National Chapters.

The shows you how scared the

Permalink Submitted by RICHARD RIKER on October 21, 2019 - 1:23pm
The shows you how scared the bloated public schools are of the charter schools. The tax payers in the U.S. pump more money into schools than any other country but still they fall far short on international tests. They don't need more money to make them better they need competition and that's what the charters are giving them.

No, they are alternative

Permalink Submitted by Anonymous on October 21, 2019 - 6:45pm
No, they are alternative option, so you will be paying taxes for the “Charters” ALSO! You’re not too smart, nor informed, as you try to portray yourself...Are you “VoteDum2020”?

The solution to this is very

Permalink Submitted by The Truth on October 21, 2019 - 8:44am
The solution to this is very simple. You do not want to share revenue with Charters, then do not allow underperforming schools to exist in your district.

The state controls the

Permalink Submitted by VoteDem2020 on October 21, 2019 - 12:19pm
The state controls the pursestrings of the schools and the rules that local boards of education have to follow. Republican governance in this state for the past 22 years is why Florida is beset with "underperforming" schools. 40th out of 50 in pre-K to 12 performance - and 48th out of 50 in pay. Worse than Alabama, Mississippi, and Louisiana.

Permalink Submitted by Anonymous on October 22, 2019 - 10:50am
For higher education, Florida ranks #1 https://www.abcactionnews.com/news/state/florida-ranks-best-state-in-the-nation-for-higher-education-report-says Let's try the National Assessment of Educational Progress (NAEP) which is the largest nationally representative and continuing assessment of what America's students know and can do in various subject areas. According to them: Florida is the 4th best state in the nation for K-12 student achievement. https://www.nationsreportcard.gov/profiles/stateprofile/overview/FL

Nooo it is an historically

Permalink Submitted by Anonymous on October 21, 2019 - 6:50pm
Nooo it is an historically stagnant gene pool. But it’s beginning to come around over the last 50 years, and much faster than a dozen other States.

Consider this: It may be we

Permalink Submitted by SA Croft on October 21, 2019 - 8:29am
Consider this: It may be we are in a state of transitioning from the "public school system" into a system of "charter schools" and "private schools" because the government run schools like everything else the government takes control of has become a bloated system that has overstepped its boundaries. Instead of teaching "reading, writing, and arithmetic", it has and is using the government schools as social and cultural change agents. It is this system that is key in trying to change societal norms concerning tradition and morality into a genderless, immoral, no boundaries world in which the biggest losers are our children and our country. God is forbidden inside the system (unless it concerns Islam). And just look at the toll it is taking on the United States: more than 50% of children born out of wedlock, millions of unborn children murdered in their mother's womb, sexual promiscuity, rampant sexually transmitted disease, children in full-fledged rebellion against their parents and other authority figures, schools who cannot and will not control children who disrupt the learning process for others who are trying to learn, etc. Alarmingly, more and more of our children have accepted the idea that Socialism is good and that they deserve what others have earned. Our children have been sold a bill of goods that is leading them down the road to Hell. The really scary thing is that we as parents have allowed it.

So instead of concentrating

Permalink Submitted by Dorine on October 21, 2019 - 8:13am
So instead of concentrating on making the public schools better, the school boards want to cripple the only viable alternative for students? Sad!