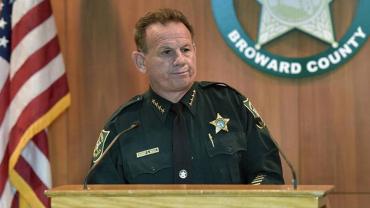 Israel's only ray of light in the union count is the no-show total: The number of deputies who didn't vote outnumbered the ones who did. Of a 1,300-member roster, the union received back ballots from 628 deputies -- 534 of them expressing their dissatisfaction.

On Friday, April 20, the union local sent out electronic ballots. Members were asked to lodge their collective opinion on Israel's future following tempestuous months within their ranks as a result of the shooting at Marjory Stoneman Douglas High School.

Israel had become a lightning rod in the weeks after the tragedy, at first appearing as a media fixture, later becoming the focus of negative speculation. As evidence emerged of inaction taken by his deputies during the shooting, and his department failing to intervene with the shooter after numerous visits to his home, Israel was eventually viewed as the sheriff whose inadequate leadership had let his troops down.

Gov. Rick Scott was lobbied to exert his power to suspend the sheriff; he opted instead to call for a full review. Currently, the Florida Department of Law Enforcement is investigating Broward Sheriff's Office actions relating to shooter Nikolas Cruz's slaughter of 14 students and three teachers on Feb. 14. Meanwhile,  73 state legislators have formally called for Israel to step down.

There have been reports seeping out of the Sheriff's Office of an erosion of morale among deputies. Union representative Jeff Bell instigated the confidence/no confidence vote as a result of numerous problems his officers face. Israel, meanwhile, has positioned this vote as merely a means of getting pay raises -- what he actually described as “extortion” -- even as Bell stated pay raises were not the driving factor.

Another union within the Office has lent support to Israel. On April 23 the Federation of Public Employees, which represents 2,500 Broward Sheriff's employees -- not deputies -- issued a letter of support to the sheriff. “As your largest union, we support you and have confidence in how you are running this large complex agency.” The letter referenced the near-unanimous approval of its last contract as a vote of confidence.

In describing the vote instigated by Bell to be a ploy, Israel declared, “It is unfortunate and appalling that the IUPA union boss -- in the midst of ongoing labor contract salary negotiations -- is trying to use the Parkland tragedy as a bargaining tactic to extort a 6.5 percent pay raise from BSO.”

The Union head stated his primary focus is on Israel’s actions following the shooting, and particularly how the sheriff verbally laid blame on one deputy on scene, Scot Peterson, who failed to enter the school and engage the shooter. Bell relays that many deputies were upset with Israel for publicly referring to Peterson’s actions as "cowardly," something his deputies are now hearing the public hurl at them.

What has been revealing is that in the aftermath of the shooting, with numerous issues exposed inside Israel’s department, the sheriff has been more focused on repairing his own image. A non-profit group, headed by his campaign manager, was formed to raise money so it could hire a crisis management firm to prop up Israel’s flagging public image. His priority has not been on the problems in his own department, evidenced by the union voting to express concerns within its body.

Thursday’s vote results are not binding in any way. What Bell is hoping will next transpire is that this blatant show of dissatisfaction will become an impetus for Gov. Scott to remove Israel. He has said he will present the vote tabulation showing mass displeasure among deputies to the governor, who is perfectly entitled to suspend Israel and appoint a replacement if he so chooses.

Brad Slager is a Fort Lauderdale freelance writer who writes on politics and the entertainment industry and his stories appear in such publications as RedState and The Federalist.

it is even more embarrassing

Permalink Submitted by say it on May 8, 2018 - 4:17pm
it is even more embarrassing that this fool still has not resigned...

My strong suspicion is that

Permalink Submitted by Jim Fetzet on May 1, 2018 - 4:03am
My strong suspicion is that the deputies figured out that the reason the sheriff ordered them not to enter the school was because he was in on the scam and they were not and he worried they might take out one of the players shooting at students with simulation! He is a complete disgrace. See "The Parkland Puzzle: How the Pieces fit Together", https://d.tube/#!/v/monaalexis27/lvkflnbp

I guess there is no hope that

Permalink Submitted by Lynn Siebert on April 29, 2018 - 4:53pm
I guess there is no hope that Israel will find the decency to resign. Sigh.

Permalink Submitted by Usual Suspects on April 27, 2018 - 10:36am
Then-Republican incumbent Sheriff Al Lamberti did a great job, but sadly lost to Israel in a Broward Democratic wave. I did my homework before I voted. The ballot box is not a joke, folks!

That "No confidence vote"

Permalink Submitted by C Breeze on April 27, 2018 - 8:33am
That "No confidence vote" should come as 'no surprise' to anyone; NOW,.. on to the FBI (and bring your pencils 'boys & girls'), where the entire country can provide a "confidence vote" on a FAILED law enforcement agency and the Democrat politicians and their 'appointees', who have driven the FBI straight into the ground like a "coffin containing the putrid corpse" that they alone have created !

The FBI is currently a

Permalink Submitted by C Idiot on May 8, 2018 - 4:16pm
The FBI is currently a Republican run agency dumbass, and was ran previously by 2 Republicans. You might just be the stupidest person on the planet...nothing against non-idiot Republicans...

He's toast at the next

What disturbs me is that a

Permalink Submitted by Donald Grahn on April 27, 2018 - 2:07am
What disturbs me is that a majority of union members didn't 'bother' to vote - becau$e - $tatus quo? Job $ecurity? Peer-power pressure? - OR - maybe like Michael-Jay says - many are actually 'Public $erpents' I thought Union members were more active in their union's activities than the average Joe in society - and would bother to vote on issues of vital concern to their careeer.. https://www.youtube.com/watch?v=UKfirSDCjQ8

Permalink Submitted by Anonymous Deputy on April 27, 2018 - 7:32pm
Actually many didn't vote because they fear Israel's retaliation and the fact that the electronic ballots were sent to personal email addresses, which they did not want associated with what their vote was for fear that Israel will get ahold of said results and retaliate. I don't blame them seeing the things that happen in this agency if you aren't liked.

Permalink Submitted by C Breeze on April 27, 2018 - 8:42am
"Those that can't "DO", teach; and those that can't "TEACH", become gym teachers, or Union Representatives... or run for "Election" (where nobody has ever been aware of their incompetence before....)". "One bad apple can spoil the entire barrel !"

They may also have had no

Permalink Submitted by Crystal Burgos-... on April 27, 2018 - 7:47am
They may also have had no opinion, There may be other areas where he exhibits good leadership. Most police departments in Florida had not prepared a scenario for this type of attack. I am sure that they are preparing one now!

Those who didn’t vote are

Permalink Submitted by The Mickster on April 26, 2018 - 7:52pm
Those who didn’t vote are afraid their results will get out along with their name. Can him and that will improve the image.