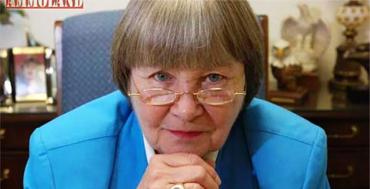 Prominent Second Amendment lobbyist Marion Hammer, with a long career of working in Florida, has been heavily occupied of late. A proposed constitutional amendment to the 2020 ballot requires her attention. Thanks to a recent administrative ruling, she's been freed up from a lingering ethics issue and can finally attend to that heady piece of electoral content.

Curses, say state Democratic leaders. They're still in a tizzy.

At issue was a probe instigated in both the state Senate and the House looking into possible improper reporting of compensation she received for lobbying duties. The Office of Legislative Duties ordered Hammer to refile her quarterly paperwork to properly reflect compensation she had received involving the National Rifle Association.

When the details of the filing errors were looked at it closely, they appeared to be little more than a correctable technicality; but the Democrats saw an opportunity. The complaint against Hammer was initially filed by Sen. Perry Thurston, D-Fort Lauderdale. A companion complaint was filed in the House by Rep. Anna Eskamani, D-Orlando. Hammer committed what amounted to "a clerical error," according to both Senate and House, and rules allow her a time period  in which to correct such errors, which she has done. End of case.

The issue stems from new rules instituted that required a quarterly reporting method by lobbyists to show how they are compensated for services. Hammer’s status is that of an employee lobbyist, a not-her-own lobbying firm. Her work is directly on behalf of Unified Sportsmen of Florida. But the USF is directly supported by the NRA, and the compensation for her services comes directly from the NRA in its reports.

Hammer, a lobbyist and known fixture in Tallahassee for decades, had sought advice on the newer reporting requirements and was told her prior filings would be sufficient. “I have been a registered lobbyist since 1974,” stated Hammer. “I have never told anyone EVER that I am not a lobbyist. Since the filings for Unified Sportsmen of Florida are really a non-issue, we would have filed from the beginning had we not been advised to the contrary.”

Senate President Bill Galvano announced Hammer refiled her lobbyist information, and directed USF to file the compensation reports within the 30-day window set by Office of Legislative Services Counsel Audry Moore, and as a result, no further action was required. GOP state Rep. Tom Leek, who chairs the House Public Integrity and Ethics Committee, stated Hammer was in violation of Joint Rule 1.4 of the Legislature, but there is a time given to correct matters of this nature, and Hammer complied well within that time frame. Thus, the matter was closed in the House.

In a sign that they were looking to make this issue far more nefarious the Democrats expressed overly dramatic interpretations. Thurston suggested Republican Senate leaders showed a “willingness to abandon” Senate rules, even though the rules were adhered to. He went on to say this result was a way to “show the power of the National Rifle Association in the Florida Legislature.” Likewise, Eskamani sent out a tweet that expressed her own similar disappointment. She declared the House was expected to be ‘following the Senate’s lead’ so this did not surprise me, though it is equally disappointing.”

The Democrats want nothing better than to silence perhaps the nation's most effective lobbyist on matters of gun control. They're going to have to do better than that. They've just embarrassed themselves with their pettiness and, frankly, ignorance.

Permalink Submitted by xemewotom on September 2, 2019 - 3:00pm
I have made $18539 by doing very simple and easy job online. Joined this job 3 months ago and in my first month i have made $12k easily without any special online working experience before. Very easy job and earning from this are just awesome. Everybody can now get this job and start making real cash online right now by follow details on this website...... HERE _____> https://bit.ly/2yBc

The issue stems from new

Permalink Submitted by Kieran Farrell on September 2, 2019 - 11:22am
The issue stems from new rules instituted that required a quarterly reporting method by lobbyists to show how they are compensated for services. Hammer’s status is that of an employee lobbyist, a not-her-own lobbying firm. Her work is directly on behalf of Unified Sportsmen of Florida. But the USF is directly supported by the NRA, and the compensation for her services comes directly from the NRA in its reports.For more news.................Copy and paste......................https://bit.ly/2XHEWoU

Permalink Submitted by Brenda Shriner on September 1, 2019 - 4:19pm
Opportunist attack behavior like this by the Democrat party is one of the many reasons why they are losing support right and left. It'll probably be around 2032 before the Democrats have a chance in hell of occupying our White House. And that's okay by me.

Permalink Submitted by Jerry on September 1, 2019 - 12:25pm
Marion Hammer, repubs are hammering themselves as the voting public is tired of the excuses as people get slaughtered in mass shootings almost daily now ………….....Most people are for universal background checks, laws to take guns from dangerous people and limiting rounds to 6 as if you can't hit something in 6 rounds, you shouldn't be shooting a gun...……….The other problem is just too many guns lying around when someone gets drunk, hurt or depressed causes many gun deaths so a $50/yr tax would allow those who need a gun to have it but those who don't, won't want to keep paying so turn it in...…… Yesterdays Texas mass slaughter might have been prevented if the gun hadn't been in the vehicle pulled over and not had 3 30 round clips. …...Owners should be responsible if their gun gets stolen or otherwise used illegally...……...It is bad storage, etc that is responsible for most gun thefts and getting them into the hands of criminals......…...... Overall this should get rind of 3/4 the guns and leave them mostly in the hands of people who know how to respect and use them instead every fool around...……………..How many people do you know who never should own a gun? 50%?…………..Think about it...…

Permalink Submitted by JonInFla on September 6, 2019 - 5:49pm
Two hallmarks of gun control proposals: 1) They punish the law-abiding without doing anything to affect the criminal. 2) They are recognized from the beginning as failures, and are always seen as 'the first step' with more laws already planned for when this one fails.

So you want to pass a law

Permalink Submitted by Florida Southie on September 2, 2019 - 11:12pm
So you want to pass a law that would have prevented the stealing of the gun? Maybe pass a law making theft of property illegal. Or, better yet, we should make murdering others illegal! That will stop it all from happening, right?!?!

Get over yourself and your

Permalink Submitted by Looking for Justice on September 2, 2019 - 11:31am
Get over yourself and your ignorance

Democrats and leftists are

Permalink Submitted by Colt Seavers on September 1, 2019 - 8:49am
Democrats and leftists are nothing for 2020. They will be well advised to roll over, save their energy, and focus on staying lubricated up for their rumping thats coming in 2020. Good advice!

Permalink Submitted by Jeff Carry on September 1, 2019 - 10:27am
Ms Hammer continues to fight for the gun makers. She has been on the wrong side of history for a very long time and once again she continues to wrap herself in the second amendment as she sells guns. I hope she can look her grandchildren in the face as the are doing active shooting drills and hey those drills have nothing to do with the guns I help sell.

We need to clone her for the

Permalink Submitted by JonInFla on September 6, 2019 - 5:56pm
We need to clone her for the sad day when she finally gives up the ghost, probably during a lobbying session. On that day we do not need the flags at half mast – they should be at the top of the pole, and inverted.

Yes Jeff and Jerry above: we

Permalink Submitted by Colt Seavers on September 1, 2019 - 9:00pm
Yes Jeff and Jerry above: we hear your leftist talking points. Both of you leftists are well advised to keep your selves well lubricated for the #walkaway from the Democratic party and the royal rumping you are both gonna get in 2020. It's gonna make your 2016 Hillary loss feel like just passing gas!!!!!

I know Ms. Hammer and have

Permalink Submitted by Looking for Justice on September 1, 2019 - 10:58am
I know Ms. Hammer and have known her for at least 20 years. You are so full of lies and hate you will say anything to trash the one person who has saved gun rights for all Floridians. You hide behind your keyboard to attack her while she stands strong and you can't stand it. Does talking about her grandchildren make you feel powerful?

Permalink Submitted by Looking for Justice on August 31, 2019 - 11:33am
Mr. Slager obviously took the time to see through all the Democrat BS and expose the scurrilous political attack on Ms. Hammer. What a breath of fresh air.

Permalink Submitted by Robert Warner on August 31, 2019 - 7:40am
Brad - With Dorian approaching, surely you must have something better to do with your time.

Thank you for overseeing my

Permalink Submitted by Brad Slager on August 31, 2019 - 1:09pm
Thank you for overseeing my use of personal energies and know that corrective action is being taken.

Dorian will pass in a few

Permalink Submitted by Ron on August 31, 2019 - 11:27am
Dorian will pass in a few days. The 2nd Amendment will last well past our life times.

The Second Amendment is long

Permalink Submitted by Anonymous on August 31, 2019 - 3:14pm
The Second Amendment is long ago passe!

Try breaking my door down and

Permalink Submitted by Anonymous on September 1, 2019 - 3:28pm
Try breaking my door down and you'll learn otherwise.