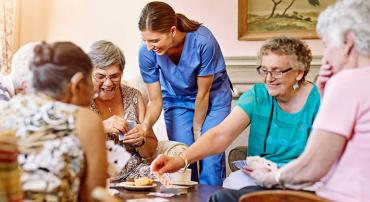 Two Florida lawmakers are teaming up on legislation requiring state officials to keep a closer eye on the quality of nursing homes and assisted living facilities after 13 senior citizens died in an overheated nursing home in September.

The “Granny Cam” legislation, filed Tuesday in the House by Rep. Katie Edwards, D-Plantation, and in the Senate by Sen. Gary Farmer, D-Fort Lauderdale, would prioritize power restoration for certain medical facilities including nursing homes during times of crisis.

Public utility companies would also be required to inform facilities administering “essential” medical care if their services are scheduled to be interrupted at any time.

The bill would also establish an “undercover” system to watch for abuses and neglect in nursing home, a hot button issue since the Hollywood Hills story broke.

If the bill passes, the Office of the State Long-Term Care Ombudsman would keep a much closer eye on assisted living facilities, conducting unannounced quality-of-care investigations of health and long-term care facilities statewide.

The office could have employees show up for the review in uniform, or they could go undercover to investigate possible abuses and neglect at nursing homes. Those found violating state laws could receive civil penalties anywhere from $5,000 to $10,000 per occurrence.

Under the bill, the State Long-Term Care Ombudsman office would also contract with a private nonprofit to oversee the day-to-day operations of the long-term care program, which trains volunteers to spend time in and “improve the quality of life” of senior citizens at nursing homes.

The legislation would also tap a legal advocate for the Florida Ombudsman office who would lobby on behalf of nursing home residents suffering from abuse, neglect or exploitation.

Working in tandem with nursing homes and ALFs statewide, the State Long-Term Care Ombudsman would compile an annual report of complaints, concerns and conditions of state facilities serving the elderly.

The Long-Term Care Ombudsman would submit that report to the United States Assistant Secretary for Aging, the Governor, the Senate President, the Speaker of the House, the Secretary of Children and Families, and the Secretary of the Agency for Health Care Administration at least 30 days before the annual legislative session begins.

Using the report, the Ombudsman would then make recommendations on how to handle complaints or concerns surrounding nursing homes and assisted living facilities statewide. Another key component of the measure: requiring the Ombudsman to review each and every one of Florida’s nursing home/ALF emergency management plans, which are required by law.

Floridians would be encouraged to report abuses or neglect in nursing homes or ALFs through a statewide, toll-free number established under the bill.

The quality of life at state nursing homes made headlines following Hurricane Irma, which caused widespread power outages throughout the state.

The tragedy has prompted reactions from many state lawmakers, some of whom, like Edwards, say the time is now to protect those who need the most care.

“We have learned that we can and must do better when it comes to patient protection,” Edwards told Sunshine State News. “It was evident to me through personal experiences after Hurricane Irma which was compounded by the tragic losses of life at Hollywood Hills.

“There is an expectation that the government provides a robust regulatory framework to ensure that patients are treated with dignity and respect and that health care delivery is provided without compromise. I am still infuriated by the things that l learned after Hurricane Irma.” Edwards continued.

The Florida Health Care Association was quick to criticize the new legislation, saying they believed it would throw money at attorneys rather than actually provide a solution for the problems facing Florida's senior citizens.

"For trial lawyers to aggressively seek to capitalize on genuine human tragedy is unwelcome, unseemly, and unhelpful," FHCA spokeswoman Kristen Knapp told Sunshine State News. "Our focus is on finding workable solutions that will improve the safety and well-being of the residents under our care. This includes procedures for backup generators and priority restoration of power. It does not include lining the pockets of trial lawyers at the expense of long term care residents. We will oppose this misguided legislation with the same determination with which we work to develop effective solutions to the real challenges before us."

To read the full text of the bill, click here.

My father is presently

Permalink Submitted by Katy Davis on November 24, 2017 - 6:33pm
My father is presently residing in Gainesville Health Care Center (Registered Agent is Hil, Ward, Henderson attorney Robert Shimberg of Tampa), which began a pattern and practice of coming up with a selection of false allegations against me for correctly reporting the facility's medical neglect of him. He has now been being subjected to mental abuse and coercion, including but not limited to forcing me out of his room during a lawful visit, and then leaving him outside alone for hours believing I was coming back when rude and highly misinformed law enforcement had instructed me to leave, and then telling him that I had "abandoned" him. (See my Facebook page for more. It's awful) All of what they are doing is illegal, but the just plain abusive and nasty administration of the place is presently safe from consequences in the knowledge that DCF is useless at best, that ACHA has been gutted and corrupted, and that cops aren't lawyers and their agencies are not provided with guidelines for enforcement of existing statutes that prohibit what is happening to my father. New legislation to protect Patients Rights and regulate and fund investigations is desperately needed. I am my father's only relative that doesn't neglect and/or steal from him and I am his medical proxy, but the place has not followed the law on the latter, or at all in regards to his rights. I could not even see him on Thanksgiving. Administrator Betty Carlson showed him some nonsense to convince him that this was legal, and ACHA's so-called Patient Advocate and Ombudsmen did nothing more than to call Dad, who later reported to me that he did not know who called because he was not wearing his hearing aids. And it's not just nursing homes, but hospitals that coerce, neglect, and abuse the elderly. My father is only in that place because after being terrorized that he had three months to live and was dying of mesothelioma (big money in that) even though Dr. Michael Jantz had NOT diagnosed him with it, a Case Manager woke him from a dead sleep and yelled directly in his face that "You HAVE to go to Gainesville Health Care Center! Nobody wants you! You have nowhere else to go!! They LOVE YOU at Gainesville Health Care Center!! Your daughter is the problem!!", and on and on and agreed to go without Informed Consent. I once thought that problems in nursing homes were the exception and the fault of individual abusers on staff, and that residents had few visitors because their families did not care, but now I know. I will absolutely be lobbying as a citizen for major legislative action and reform during this session of the Florida Legislature. *I will welcome being contacted via telephone or Facebook by any other concerned citizens like myself, as well as referrals to attorneys that aren't scared of the Rick Scott cronies in the business, or those of Pam Bondi like Shimberg.

Permalink Submitted by C Breeze on November 15, 2017 - 10:39am
JUST BUY THE DAMN GENERATORS, AND BE DONE WITH IT !!!!!!!! Pretty soon you pettifoggers will be "legislating body cameras on Nurses, Aides, Doctors, Healthcare Administrators, etc, etc, etc... " IN REALITY, the ONLY ones who actually NEED body-cameras are LEGISLATORS, so we can SEE you wasting time, tax money, and bathroom breaks,...as well as your time spent with lobbiests and campaign fund raisers........ WAKE THE HELL UP....."WE THE PEOPLE" ARE WATCHING !