Dean Cannon Takes Over as President and CEO of GrayRobinson 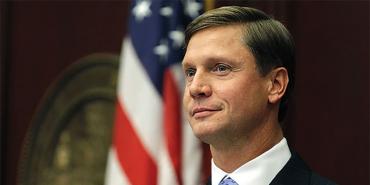 This week, former Florida House Speaker Dean Cannon took over as president and CEO of GrayRobinson, one of the most prominent legal and lobbying firms in the Sunshine State.

GrayRobinson announced that Cannon, who had been an executive vice president and led the firm’s government affairs practice, started his new duties this week, taking over from Mayanne Downs who is refocusing on a host of cases. Cannon has a long history with GrayRobinson, working as a runner for the firm when in high school and practicing there from 1995 through 2007. Back in April, GrayRobinson announced that Cannon would take over from Downs.

Cannon weighed in on his new duties on Thursday and said he was glad to have Downs’ support.

“I am extremely honored to have received Mayanne’s nomination and the unanimous support of my colleagues, many of whom have provided support and longtime friendship that has helped shape my legal and political career,” said Cannon. “We have an incredible law firm, and I am extremely grateful for this opportunity, and fully committed to our collective future success as I undertake the position of president and Chief Executive Officer.”

As he starts his new role, Cannon plans to have a “keen focus on recruitment in key practice areas and continued geographic expansion within Florida.” He also plans to continue to work with communities and leaders across the Sunshine State.

“Building relationships with government leaders, as well as civic and corporate leaders throughout our state, has greatly enhanced our ability to advance our clients’ interests,” Cannon said. “In a time of great technological and cultural change, it will be even more important to maintain personal relationships within our communities, and within our government.”

Now 51, Cannon was based out of Winter Park where he was first elected to the Florida House in 2004, taking over as speaker after the 2010 elections and facing term limits in 2012. During his four terms in the House, Cannon focused on a host of issues including tax reform, healthcare, Medicaid and reforming the courts.