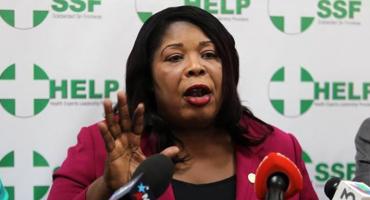 A South Florida lawmaker is making headlines after she attempted to use her connections to a Florida Power & Light company official to restore electricity to the homes of her family after Hurricane Irma struck the state last week.

Sen. Daphne Campbell, D-Miami Beach, sent a series of text messages to FPL’s Director of State Legislative Affairs John Holley last week with the addresses for her sister and her mother, requesting help to turn their lights back on after Hurricane Irma knocked out their power.

“Can someone help me with the power?” Campbell asked Holley in texts dated Sept. 11, just two days after Hurricane Irma made landfall in the Florida Keys.

Campbell then explained her mother was “sick” and “on oxygen” and texted Holley her sister’s address.

“Let me see what I can do,” Holley replied.

Campbell sent six more text messages over the next few days, requesting Holley’s help in turning her mother’s power back on after it went out again after the storm.

“The power for my mom off again,” Campbell wrote to Holley. “Can you please ask someone to take care of that ASAP?”

Holley appeared to be receptive to the requests, saying he would let someone at the state’s biggest electric provider know about the power outage.

Both FPL and Campbell acknowledged the text messages to Rise News, which first reported the news this week.

FPL denies giving Campbell priority over others in getting her power back.

Campbell called the incident a “shame” and said her phone had been stolen by the reporter who originally broke the news, Rich Robinson.

“Imagine we are all struggling together fighting for the needs of the vulnerable within our district and for someone to use delicate circumstances surrounding this situation for their own ploy is a disgrace,” Campbell wrote on Twitter Monday.

Campbell denies giving consent to Robinson to use her phone.

“It would be an understatement just to say how disappointed I am in this despicable, atrocious and malicious behavior,” she wrote.

Robinson told the Miami New Times he had made it clear he was a member of the media when speaking with Campbell. Robinson said he told the Miami senator numerous times he was a reporter and even had a large blue press badge hanging from his neck the entire time he spoke with her.

"I would like her to be held accountable,” Robinson told the New Times. “It's really dangerous to think she can come after a new company in town and say something that's accusing me of doing something basically illegal.”

Sunshine State News contacted Campbell for further comment, but had not received a response at the time of this article’s release.

Campbell repeatedly said she was working hard to restore power to her district where some are still without electricity.

“My constituents have been suffering, still suffering and few will continue to suffer without electricity for a short period of time but by the grace of God, with my due diligence, the suffering will end soon,” she said.

Trees and Power Lines: Has Coral Gables Been Entirely Honest with Its Citizens?

Hell I would do everything in

Permalink Submitted by Rod on September 21, 2017 - 12:59am
Hell I would do everything in my power for my mom. And if I were more powerful I would do more. In a time of crisis we flex all of our muscles for who we love.

I don’t know why anyone would

Permalink Submitted by Nadia Pierre on September 20, 2017 - 8:37pm
I don’t know why anyone would be surprise by Daphne Campbell’s actions, she’s just being her usual normal crooked self! Corrupt as they come… “Lie, Cheats, Steels.” She manage to stay in office because her lobbyist are protecting their special interest through her. Personally I believe her Election’s are rigged. By the way, her crooked son was also rearrested for ID fraud while free from jail awaiting a new trial. Yep! The same (Medicaid fraudster) Like mother like son!!!

THIS is the problem with

Permalink Submitted by C Breeze on September 20, 2017 - 1:03pm
THIS is the problem with these "room-temperature IQ" morons we consistently elect to "govern" us: it's ALWAYS about THEM, their FAMILY MEMBERS, their FRIENDS, their BIG $ CONTRIBUTORS, and their sole access to Media Outlets. ! ! ! When the SHTF, YOU (and the rest of their constituents) DON'T MATTER 'WORTH A DAMN' ! ! !

If she is so concerned about

Permalink Submitted by Crystal on September 20, 2017 - 10:00am
If she is so concerned about her family having power, she should buy them a generator like the rest of us did!!

Why would anyone patronize a

Permalink Submitted by Bocaboomer on September 20, 2017 - 8:44am
Why would anyone patronize a schmuck trying to hustle blog followers to buy a service or product? My apologies if I seem a tad too harsh dealing with an orphan. He/she obviously has no manners or traditional values instilled in him/her , so I can only chalk it up to lack of parental guidance and sound upbringing. It's really sad that 'Anonymous' has no values and is incapable of rationalizing this is not the proper forum to pollute being a shill for a product. Stick to Craig's List.

Permalink Submitted by the way on September 20, 2017 - 8:43am
should be investigated criminally...

The reporter should sue for

Permalink Submitted by crystal on September 20, 2017 - 10:01am
The reporter should sue for defamation of character. She is accusing him of stealing and refusing to acknowledge that she was, in fact, only asking about power for her family members NOT her constituents. That is obvious from the messages and no amount of prevarication can cover that up!!

This is an example of how a

Permalink Submitted by Manny Johnson on September 19, 2017 - 9:02pm
This is an example of how a lot of politicians show a total and complete disrespect for the citizens that elect them to positions where they are overpaid, underworked and totally exploiting the citizens behind their back at every turn. She should be forced to leave office NOW!

Typical actions of a minority

Permalink Submitted by Gregory E. Johnson on September 19, 2017 - 5:25pm
Typical actions of a minority member Democratic Party affiliated politician whose family members are more important than the average voter of her District! Hopefully, voters will remember this incident and that of any politician regardless of political party affiliation that would use their political office to obtain benefit during a declared State of Emergency. The Senator should be censored by the entire Florida Legislature and if not removed from office then voted out of office as this fking example of the Senator's lack of concern of her constituents is deplorable at best as this quote is a slap in every constituents face! “Imagine we are all struggling together fighting for the needs of the vulnerable within our district and for someone to use delicate circumstances surrounding this situation for their own ploy is a disgrace,” Campbell wrote on Twitter Monday.

Just another self entitled

Permalink Submitted by Gail on September 19, 2017 - 4:58pm
Just another self entitled politician. Her contacts at FPL should be demoted. Their instructions are to prioritize restoration to areas where the most people benefit. Not a single relative of a FL politician who is too lazy to go pick up her mother or get her moved to a shelter. Wonder if that Nursing Home where 8 died are in her / or her mother's district?

Permalink Submitted by ISABELLA1709 on September 19, 2017 - 4:32pm
Meanwhile my son-in-law worked from Tampa while his company's office in Ft Lauderdale was without power for over a week. They ONLY run 10 hospitals in that area.

If she was so concerned why

Permalink Submitted by Laura on September 19, 2017 - 4:11pm
If she was so concerned why didn't she just go get her mother and bring her to her home until the power could be restored?

That was my exact thought too

One look at the photo and you

Permalink Submitted by The Swampfox on September 19, 2017 - 3:53pm
One look at the photo and you can see the hypocrisy . What if I as a white person cried out, "no justice no peace." My mother needs assistance. You know who took care of her? Me, perhaps Ms. Campbell should consider keeping her own yard clean before crapping in everyone else's. If not a lawmaker (misnomer) she would never had that opportunity. Yes, its Pathetic ,despicable, and more words that are not acceptable on this site describing Ms. Campbell's actions. The mindset of an illegal alien supporter, go tot he front of the line and let everyone else wait. Sure's hell wouldn't want to be on a sinking ship with this person!!!

Permalink Submitted by army op's vet on September 19, 2017 - 3:37pm
Ha....what you expect...she is a Democrat...does her photo look like she also is Black...???...Another Corrupt Black democrat thinks She is Owed EVERYTHING.....and people wonder why these Districts are high drug and crime areas.....

Wow! We have Trump to thank

Permalink Submitted by Millie Herrera on September 19, 2017 - 3:50pm
Wow! We have Trump to thank for all of you racist pigs to come out of the closet! So you think it's OK to say that ALL Democrats and ALL Blacks are crooks, and EVERYONE who lives in "these" districts are criminals and drug users??!! How white of you!!!!! Disgusting!

Permalink Submitted by Anonymous on September 20, 2017 - 1:25pm
"Millie",.. Go tell your "Black Racist" concerns to the seven senior citizens who died in the assisted living facility for lack of AC and lack of aid while the media and political elitist Class were "trumpeting" their "phoney concern and loud accomplishments".. to complicit media "partners". AND, THIS PARTICULAR "REPRESENTATIVE" IS THE "PICTURE OF" A "ME FIRST !" INTO THE LIFEBOAT OF A SINKING SHIP" EXAMPLE of the "entitlement seekers" that she caters to, ABOVE ALL OTHER of her constituents !

You are blind or just plain

Permalink Submitted by Gregory E Johnson on September 20, 2017 - 8:46am
You are blind or just plain ignorant/tone deaf choosing to not to see the obvious concept that was put into motion by an elected State Senator as she chose to use her political connections to obtain favor from FPL during both a Federal and State declared emergency. I don't give a damn if you object, as you are part of the problem; that being those on the left would stoop to the level of total disregard to fellow state citizens putting their family members first and above every other citizen.

Permalink Submitted by John on September 19, 2017 - 11:32pm
TYPICAL LIBERAL BS. Everyone with a brain is a racist or some kind of ism. Army Vet did not say anything racist. Go get your mommy to get you a warm cup of milk Snowflake.

Hey Millie -- Welcome to the

Permalink Submitted by Gail on September 19, 2017 - 4:54pm
Hey Millie -- Welcome to the club. All Republicans are racists, bigots, homophobes, murderers and best of all -- DEPLORABLES. Doesn't feel good, does it?

Yet, the South Florida voters

Permalink Submitted by Mark on September 19, 2017 - 3:22pm
Yet, the South Florida voters will continue to support 'Daffy Daphne' because, like her size, she also has a very big mouth! She should be jailed!

Now isn't this special? A

Permalink Submitted by Bocaboomer on September 19, 2017 - 3:22pm
Now isn't this special? A elected official using their position to leverage the utility's legislative liaison to get their power restored while the elderly and infirm were languishing in the heat and humidity at a despicable nursing home. How's that for the "I'm gonna get me mine" attitude. She obviously feels too good to stand in line and wait her turn like her constituents did. As they now try to walk it back , the mere outreach is a blatant ethics violation for which she should be held accountable for. And one wonders why politicians are held in such low regard? Well here's exhibit "A".