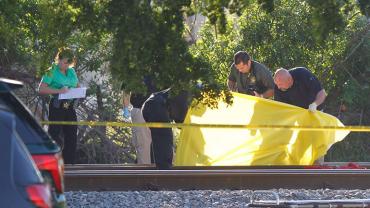 Over the past four years, residents' and opponents' passion for stopping the All Aboard Florida/Brightline passenger rail from speeding through the Treasure Coast has not abated. If anything, Treasure Coast residents have grown more resolute, underscored by Monday night’s packed house at the Lyric Theatre for the Citizens Against Rail Expansion's (CARE FL’s) fourth public meeting in downtown Stuart.

The town hall followed action of Martin County commissioners, who voted unanimously during  their Jan. 9 regular meeting to continue the fight.

They’re not giving up. And likely, neither will Indian River County..

“Recent events just confirmed what we knew all along,” he said. “Did anyone honestly not see this was going to happen?”

Crandall reminded the audience of the concerns listed in his Power-Point presentation and summarized on CARE FL brochures:

– The high number of at-grade crossings through the Treasure Coast already makes the FEC the most dangerous railroad in the country, even without the addition of a passenger rail service. The high speed of the trains makes it nearly impossible for pedestrians, bicyclists and drivers to judge distance.

– Increased congestion and traffic delays will threaten the viability of downtown businesses blocked by rail traffic, as well as put patients at risk during emergencies.

– The St. Lucie River bridge, built in the 1930s, is the only single-track bridge along the proposed route from Miami to Orlando and its estimated nine hours' per day closure time to boat traffic is considered “an unreasonable obstruction of navigation” of our waterways, falling under the purview of the U.S. Coast Guard.

– Hazardous materials already move as freight, including propane, chlorine and other toxic products and flammable chemicals. Now the FEC wants to move LNG (liquefied natural gas) as a commodity, which currently can be transported by rail only in Alaska. FEC got approval to ship LNG from Miami to Port Everglades in Fort Lauderdale, but that's as far as they can ship, at least for now.

“Our mission,” Crandall said, “is to protect our quality of life on the Treasure Coast. Period.”

Keeping in mind that the majority of those in government from the president to local county commissioners to the majority of Florida residents support the development of passenger rail, attorney Steven Ryan told the audience that the most effective means of fighting Brightline is the legal attack, accompanied by residents' calls to their legislators.

CARE was the first to retain Ryan to begin investigating their options for challenging the rail line in court, which has met with greater success than has been publicized, he said.

The legal effort by the private group was soon supported as well by Indian River and Martin counties, which each allocated around $3 million over the past four years. At the January meeting, the Martin County Commission approved continuation of the legal fight with around $100,000 remaining of the county's allocation of funds, primarily because the court, in its previous judgment, encouraged rail opponents to file the suit again..

They plan to do just that; Ryan added. But when they file and what, exactly, they intend to file will remain a secret until it's done; however, Martin County Attorney Sarah Heard gave commissioners a clue to their legal tack at the Jan. 9 meeting.

Woods told commissioners then that the suit will focus on the failure of the US Department of Transportation to abide by NEPA (National Environmental Policy Act) by issuing bonds without a “record of decision” in its review of what the legal staff believes is a flawed environmental impact statement. In addition, the bonds were allocated from highway project funds, which Woods and the legal counsel told commissioners was improper.

Ryan and Brent Hanlon, CARE's president, noted the efforts by a few state legislators to pass the state's first safety regulations on passenger rail, and commended Indian River and Martin counties for providing the only funding to continue the fight.

“It's expensive,” said Hanlon, who made a pitch for contributions by the audience to help pay for the myriad costs involved, including attorneys, lobbyists, public relations and other costs. The attorneys, including the staffs of the counties' legal departments, divide tasks among themselves, saving money and eliminating duplication of effort.

Ryan said they'd like to file multiple suits; however, they choose instead to take narrow “rifle shots” at using funds where they'll most likely get results.

One thing the organization is not doing is giving up their position in return for a stop in Stuart or elsewhere along the Treasure Coast.

“A stop is not a goal,” Ryan said. “I think we can stop this, or we can change it – to go west.” He drew applause from an audience virtually in total agreement.

There is great benefit to a

Permalink Submitted by Natalie Vero on March 21, 2018 - 11:02am
There is great benefit to a high speed rail ripping through our towns at over 100 mph. It is to the owners and no one else. The Big Lie is that people and tourists from the south want to haul all their baggage onto a train to arrive in Orlando, and THEN WHAT... Rent a car to drive to Disney? What a joke. They won't do it. Who would! The entire system north of West Palm is greed on steroids with zero benefit to residents. If high speed rail from West Palm to Orlando was ACTUALLY viable corporate money would pour in, but it doesn't, because it's not. It's a debacle and we'll end up having to pick up the pieces. When they first proposed Tampa to Orlando, newly minted Rick Scott said, "If it's such a great ideal, let them fund it." He was right. They didn't because they couldn't. IT'S NOT VIABLE.

Everyone in Martin County

Permalink Submitted by Julian Rogers on January 31, 2018 - 11:39pm
Everyone in Martin County knows that the best transportation for many reasons is the private automobile on roads paved with asphalt paid for by taxpayers. Sure trains can move more people with less fuel and substantially less air pollution. They also are much safer than travel by automobile but I doubt Brightline will make much difference in the 35,000+ that are killed every year in car accidents in this country. As far as private property rights, those only accrue to those who build homes in Martin County. Very few people believe those rights still apply to business properties. Just ask any young person, and they will tell you that government should have the right to take property in order to prevent nuisance or to make the income levels more "fair". What gives the owner the railroad the idea that they have the right to run trains anyway?? Everyone knows the answer to our transportation needs is more roads and more cars. And furthermore if we could stop the freight trains and put all that cargo on trucks we would have just the paradise we deserve.

I hope you can stop

Permalink Submitted by Cathy Harvey on January 31, 2018 - 7:10am
I hope you can stop brightline ! Why should our small community have to be impacted with this nuisance ? I live about 2 blocks from the tracks and it is already an issue with traffic with the amount of trains that pass thru now ! Bus stops are near the train tracks and so many children walk across the tracks to walk home ! This is going to destroy our infrastructure and quality of living. We thrive on our wildlife and this brings alot of tourist to our small town, the high speed and increased traffic is going to affect tourism , business near the tracks, wildlife that comes into the river like Manatees will not come that close to more traffic , dolphins will shy away etc... Please do everything.possible to keep our town as it is with the wildlife !!! Save Stuart and the treasure coast !!!

Permalink Submitted by Julian Rogers on January 31, 2018 - 11:41pm
The automobile - now friend of the wildlife?