Brian Mast: Members of Congress Can Help Veterans With Offices in VA Facilities 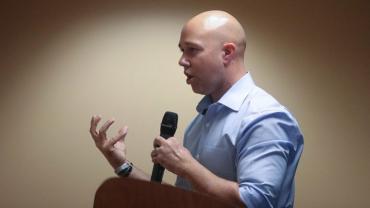 At the start of the year, Mast, who served in the Army and who was wounded when serving in Afghanistan in 2010 which resulted in the amputation of both his legs, became the first member of Congress to open an office in a VA facility when he set up shop in the West Palm Beach VA. Since then, he has been joined by three Democrats who represent the area --Congresswoman Lois Frankel and Congressmen Ted Deutch and Alcee Hastings -- as they all take turns in the office meeting with constituents and helping veterans.

Noting that it took a year of clearing red tape to open the office in a VA facility, this week, Mast introduced the “Improving Veterans Access to Congressional Services Act.” Mast’s bill makes the VA secretary allow members of Congress to set up offices in VA facilities.

The freshman Republican said that having an office in a VA facility ensures veterans have better services and he encouraged other members of Congress to follow his example.

“Serving veterans in our community is not only deeply personal to me, it’s also the most frequent request that I get as a member of Congress,” Mast said on Tuesday.  “Opening the first-ever congressional office inside a VA hospital has allowed us to help veterans on the spot: when and where they’re having an issue. Every single member of Congress should do the same at their local VA and this bill will pave the way to make that high level of service a reality for our veterans.”

Iowa Republican Congressman Clay Higgins is cosponsoring the bill, which was sent to the House Veterans Affairs Committee on Monday. So far, there is no counterpart in the Senate.

Brian Mast is the example ALL

Permalink Submitted by Anonymous on March 29, 2018 - 12:00pm
Brian Mast is the example ALL GOP members need to follow. Get a clue C Breeze, or Breeze on out of reality. Boom!

Permalink Submitted by C Breeze on March 28, 2018 - 10:07am
Ha Ha Ha Ha!!!!! OH BRIAN ! Your suggestion is like placing termites and wood beetles on trees.... Putting Congressional offices in VA facilities (and your 'examples': Frankel, Deutch and Hastings are already far enough away from their intended Congressional duties as to be ALREADY useless) I think your career Brian Mast "circles the drain" faster and faster every time you open your mouth for publication... I can tell YOUR worth by whom you associate with "in the Halls"; Frankel, Deutch and Hastings.....WHAT A LAUGH !!!!!

A Republican, and he supports

Permalink Submitted by Ocean Joe on March 27, 2018 - 2:56pm
A Republican, and he supports a ban on Automatic Rifles. Ricky, Adam, Ronnie see how it's done?