Andrew Gillum might have started out a money underdog in the race for the Florida governor's mansion, but the Tallahassee mayor has become the darling of progressive out-of-state billionaires and with less than three weeks in the campaign, has money to burn.

What does Steyer want from Gillum for such generosity?  For starters, says CNN, through his organization "Need to Impeach," the former hedge fund investor from California is directing a massive direct mail pitch to 300,000 Florida voters who have signed up to support his effort to impeach President Donald Trump. The mail piece makes specific reference to Gillum's support of impeachment.

Another organization Steyer funds, NextGen America, has already spent more than $5 million to get Gillum elected. But Need to Impeach by far is Steyer's favorite child this election cycle.

He has sunk $50 million into Need to Impeach so far, "turning him into a familiar face in TV ads and, last year, on a Times Square billboard."

Having spent $120 million and signed up 6 million people to oust the president of the United States, "Tom Steyer has assembled in a year an organization with more reach than the NRA," the Atlantic writes in its October edition. The dynamic story of his super-charged political committee, "How Tom Steyer Built the Biggest Political Machine You’ve Never Heard Of" definitely is worth a read.

Back at his San Francisco headquarters, he has his staff crunching the numbers. "For every 1 million voters, about 60 percent are registered, half support Democrats, and about 40 percent reliably show up to the polls," author Edward-Isaac Dovere tells us. "For every 1 million people who’ve signed up with Need to Impeach, 85 percent are registered, 95 percent support Democrats, and 34 percent reliably show up."

If Need to Impeach is Steyer's pet of the year, Gillum is close behind.

"If you were going to choose a single race that has the most national significance, it would be the governor's race in Florida," Steyer told CNN.

He went on to say Gillum, in particular, is a special candidate, and that "here you have a young African-American that is straightforward on education, good on climate, took on the NRA, straightforward on healthcare, has talked a lot about justice and the criminal justice system and supports impeaching the President." 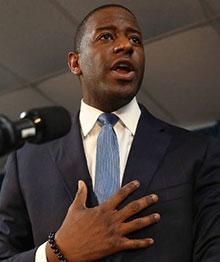 Gillum's opponent Ron DeSantis, of course, came to prominence after President Trump gave him his blessing.

And Gillum hasn't been shy in his call for Trump's impeachment. He proudly stated during the Democratic primary that he was the only candidates who had the "courage" to support that concept and used it to show how he would stand up to the Trump administration if he becomes governor.

DeSantis is convinced the dump-Trump posture is too far out of the mainstream and will hurt the Democrat in the end.  "We need a governor who is going to work constructively with the Trump administration to advance Florida's priorities," DeSantis told CNN in September. "You know, Andrew wants to impeach President Trump, about what? I don't know."

Steyer has a different view.

Impeachment, he claims, will do nothing to hurt Gillum with moderate and independent voters, and the subject doesn't fire up Republicans, either.

"We looked at 5,000 Republican ads and not one of them mentioned impeachment. So, if you want to know if it is a hot-button issue (for Republicans), it isn't," said Steyer.

Steyer believes impeachment will have an opposite effect on Democrats, who won't stay home this year as they usually do during midterms, but will be motivated to impeach, impeach, impeach.

"Andrew Gillum is straightforward and speaks the truth and that is why I think we got such a big turnout in the primary and why we will have an even bigger turnout in November," he said.

Oh, and by the way, Steyer has big plans if Democrats take back the House, the Atlantic tells us.

"... Need to Impeach will immediately move to the next phase, with a plan that includes activating its six-million-name list to immediately pressure new members to sign on with Donald Trump’s impeachment ... A group of constitutional lawyers is already under contract drafting specific articles of impeachment against Trump, which it will then mail to supporters. (If and when Bob Mueller puts out a report, they may do an update.)"

Gillum will earn that $2 million. His job, it seems, will be to make sure Florida is on board.

Soros is an anti Semite - so

Permalink Submitted by Jaimie on November 13, 2018 - 4:26pm
Soros is an anti Semite - so it follows. They all HATE Israel and especially Netanyahu. Who do you think is funding all the investigations of Netanyahu anyway? Very important to understand that we in America tend to be myopic and not understand that Soros and Steyer fund global actions - Muslim immigration to the EU for example. Who do you think has bribed all the EU officials? Or the press in both the EU and the US? Seriously - does anyone really think Jim Acosta does it for free? Wake up America!!!!!! this is all planned!!!! And it is all global. Steyer has $1.6 BILLION to spend. SOROS HAS $18 BILLION to spend.

Give me a call Andy - we need

"Impeachment" of a president

Permalink Submitted by Ted Kruze on October 22, 2018 - 11:44am
"Impeachment" of a president (or, for example, a justice on the U.S. Supreme Court) is the business of the U.S. House of Representatives ... and the governors of the 50 states have ABSOLUTELY NO ROLE in such a proceeding. At this point, I'd guess that most full-fledged and passionate Democrats would personally like to see Trump impeached - and the results of the Mueller investigation may ultimately convert many traditional, responsible Republicans to the same cause.

Permalink Submitted by Anonymous on October 21, 2018 - 11:55am
Watch the debate tonight DeSantis vs Gillum --It will be broadcast nationally on CNN beginning at 8 PM EDT. Tell your friends, family and neighbors about this important debate! No rational person would vote for Gillum over DeSantis, but we have a lot of irrational voters out there, so we can’t rely on reason. We must get out the Republican and independent vote –and don’t give up on all Democrats –there must be some who appreciate the benefits of a vibrant economy.

Permalink Submitted by BOZO on November 13, 2018 - 4:17pm
HAHAHAHAHAHAHA!!! You think it was smart for Democrats to put the 100% loser Hillary up as their candidate? Hillary???? Yeah - all of America waqs voting for this sick, debilitated lying witch who enabled Slick to abuse and rape women - and then ran on the "War on Women"???? Oh, we know - Chris Stephens was kidnapped, raped, tortured, burned alive and then finally put out of his misery by being murdered. That wonderful Democrat front running HILLARY. And anyone is going to take you one bit seriously?????????? HAHAHAHAHAHAHAHAHAHAHAHA!!!!!!!!!!

Permalink Submitted by Bob Graham on November 13, 2018 - 4:20pm
Hey Ted - cool it. He lost. And we all know it. So please - turn off the jets - calm down. He will have a future elsewhere. Not now. He has to get past the FBI first so it is goof to have a pause right now. Let this work its way out and next time we'll get 'em.

So now Tom Styer is now

Permalink Submitted by Gordon Shumway on October 20, 2018 - 9:27pm
OK just wondering was Hillary gonna come to Florida and give Little Andy Killum the dreaded "political" kiss of death? Well where in the HELL is she? Hillary, Steyer, and Soros need get to work on a way Little Andy Killum can run The Great State of Florida from a Federal penitentiary !!!

Permalink Submitted by Gordon Shumway on October 20, 2018 - 9:27pm
OK just wondering was Hillary gonna come to Florida and give Little Andy Killum the dreaded "political" kiss of death? Well where in the HELL is she? Hillary, Steyer, and Soros need get to work on a way Little Andy Killum can run The Great State of Florida from a Federal penitentiary !!!

So Killum's goons assault a

Permalink Submitted by Harry on October 20, 2018 - 3:54pm
So Killum's goons assault a gay journalist at his rally yesterday. That means not only is he an anti Semite but he's homophobic too? I can't imagine a worse person to have as governor. Just say no to Andy Killum.

“If Need to Impeach is Steyer

Permalink Submitted by Leslie Wimes on October 20, 2018 - 3:41pm
“If Need to Impeach is Steyer’s pet of the year, Gillum is close behind”. Really, Nancy? Gillum is Steyer’s pet, but DeRacist got Trump’s blessing. Wow.

And, aside from the usual

Permalink Submitted by Ted Kruze on October 22, 2018 - 12:01pm
And, aside from the usual Republican racism in play, the GOPs have their own anti-Obama and anti-Democrat billionaires like the Koch brothers, Sheldon Adelson, Foster Friess, Paul Singer, Robert Mercer, *** Johnson, Normal Braman, and others ... several of them living right here in River City! #GoGillum! #GoSteyer! #VoteBlue!

We already know who loves

Permalink Submitted by Joel on October 20, 2018 - 4:56pm
We already know who loves DeRacist as you call him and why, Leslie but we don't know enough about who loves Gillum and why and now we know a little more. Good story, Nancy.

The corporations that control

Permalink Submitted by Ocean Joe on October 20, 2018 - 2:10pm
The corporations that control the GOP wanted United Citizens, now you got it, stop complaining.

Steyer is simply trying to

Permalink Submitted by Tampaguy on October 20, 2018 - 1:00pm
Steyer is simply trying to BUY his way to "Top Commie" in the Dumbocrat party (for future Personal Use{?}), while I seriously believe that Gillum's motivation is to reverse the black-white nature of Florida. Little does he realize that the Blacks of Florida have learned to think for themselves, and are doing better every day - Life, liberty, jobs, upward mobility, and pure freedom and equality.

So, who's the "Top Fascist"

Permalink Submitted by Anonymous on October 22, 2018 - 12:08pm
So, who's the "Top Fascist" in the "Republican't" party? And have the 'Republican'ts of Florida' ever actually learned to "think for themselves"? Especially the ones in Tampa?

The only way the people of

Permalink Submitted by Tony Weeks on October 20, 2018 - 10:06am
The only way the people of this country will ever have a chance is for us to get rid of these super PAC’s that dump millions into campaigns. All while the rest of us are only able to donate 250$. There is a need for reform but it should be the bring this country back to the people not down the road to a socialist state where the government controls everything.

And will Gillum and the

Permalink Submitted by Charlotte Greenbarg on October 20, 2018 - 8:28am
And will Gillum and the Democrats repudiate anti-Semite Farrakhan?

Permalink Submitted by Ocean Joe on October 20, 2018 - 2:18pm
Maybe Desantis can repudiate the Proud Boy who showed up at the Gillum rally. Charlotte, do you really think limp wristed liberals come close to Aryan Nation, etc. when it comes to anti-Semitism? Who made that campaign phone call with the "minstrel" voice right after Gillum got nominated? "I be Andrew Gillum...." Has Farrakhan been involved in this campaign in any fashion? Last time I saw him he was at the Aretha Franklin funeral trying to fit in.

Too bad for Gillum and Steyer

Permalink Submitted by RepublicanConscience on October 20, 2018 - 6:12am
Too bad for Gillum and Steyer that money cannot buy integrity, decency, or erase crimes of any Democrat.