Bill Nelson: I Always Opposed Offshore Drilling ... Uh, Except When I Didn't 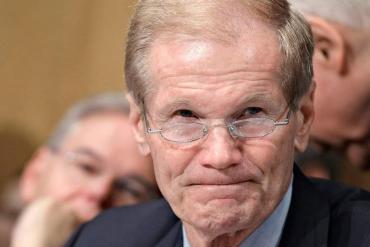 Either Bill Nelson has been standing too close to Charlie Crist, or his memory is beginning to go south. Or, more probably, he just doesn't think you'll notice. The point is, when it comes to offshore drilling, Florida's senior senator has developed a conspicuous case of the flip-flops.

Nelson is out there telling the world he's a "career-long opponent of offshore drilling." He recently put out a 900-word press release with a timeline outlining his supposed opposition.

Except the timeline conveniently omits his 2010 support for an Obama Administration plan to expand offshore drilling off the Florida coast.

That's right, party leader Barack Obama said, let's do more offshore drilling and Nelson hopped on the wagon quicker than a tick on a hound.

Now he's trying to explain it away -- but it's right there, in black and white. He only dropped his endorsement of the Obama offshore drilling expansion plan after the president did -- after the Deepwater Horizon oil rig exploded.

Here's why Nelson felt it necessary to produce his (skewed) timeline:

Facing reelection this November, the senator was "fuming" last week after Interior Secretary Ryan Zinke announced he was reversing plans to open up Florida's coast to drilling and said the decision was made at the urging of Republican Gov. Rick Scott, his possible November opponent.

Grandstand alert: Nelson took to the Senate floor to call the announcement a "political stunt" and brag that he's been fighting offshore drilling since he was in the House of Representatives in the 1980s. He told Zinke in a letter he's "fought to keep drilling away from Florida's coasts for decades now" and put out a separate statement to reporters portraying himself as the last line of defense for the coasts.

"There are no oil rigs off Florida’s coast, and as long as I’m around there will not be," Nelson said. "We’ve been at this battle now three decades, ever since I was congressman."

But wait right there for a minute.

A peek into the New York Times archives unearths Nelson's flip-flop. In 2010 he shocked environmentalists when he threw his support behind the Obama administration proposal for drilling 125 miles from Florida and reasoned away the factors he earlier considered "concerns."

"I've talked many times to [Interior Department] Secretary [Ken] Salazar and told him if they drilled too close to Florida's beaches they'd be risking the state's economy and the environment," Nelson said on March 31, 2010, according to the St. Petersburg Times. "I believe this plan shows they heeded that concern."

He defended his reversal by pointing to an agreement from a former state environment official.

"Also okay with the deal is former Florida DEP chief Carol Browner, now assistant to the president for energy and climate change," Nelson said at the time. "She said in a conference call that the 125-mile buffer is good protection for the state."

"For most of the past decade Sen. Bill Nelson has been a leader in repelling attempts to drill for oil off Florida," the paper wrote. "But on Wednesday, just as Obama announced plans to allow rigs 125 miles from Sarasota -- 100 miles closer than currently allowed -- Nelson gave his tacit approval to the deal."

"That was the real surprise," said Environment Florida's Adam Rivera. "I have never seen the membership of my organization so upset. They are angry at President Obama, and those who are aware that Senator Nelson apparently supports President Obama's plan, feel betrayed."

Nelson's office told reporters the senator was part of the planning process and convinced the White House to adopt a 125-mile buffer zone, which he believed was enough to protect Florida from ecological impacts.

Unfortunately, exactly three weeks after Nelson announced his support for the drilling plan came the April 20, 2010, Deepwater Horizon oil rig explosion that spewed 4.9 million barrels of oil into the Gulf of Mexico. Though it was located more than 125 miles from the coast, the oil reached the Florida coast.

The Obama administration responded by rescinding its March proposal to allow for new drilling in the Gulf. Nelson had signaled to the administration after the spill that he no longer could support the plan.

Asked for comment on the senator's 2010 support for Obama's plan to open up drilling off Florida's coast, Nelson’s Senate office now is denying he ever supported the plan.

If you lie with a straight face long enough, people will stop challenging you. It's a political tactic as old as the dawn of time. Nelson is counting on Floridians forgetting all about 2010. Fake flip-flop, he says.

Reach Nancy Smith at nsmith@sunshinestatenews.com or at 228-282-2423. Twitter: @NancyLBSmith. The Senate Leadership Fund helped with information for this piece.

C'mon, give Barnacle Bill a

Permalink Submitted by SoFineSoFla on January 23, 2018 - 7:09pm
C'mon, give Barnacle Bill a break, he just misread which way the wind was blowing that particular day. Or he couldn't remember...........Dementia anyone?

I just think of him as "Mr.

Permalink Submitted by Barb on January 17, 2018 - 6:26pm
I just think of him as "Mr. Photo Op". Be it the Everglades, Acreage cancer cluster, or some environmental isse that he could capitalize on Bill (OLD Billy Boy) was always there....an empty suit!!!!

It's time for the "Ride-along

Permalink Submitted by C Breeze on January 17, 2018 - 2:58pm
It's time for the "Ride-along-rocketeer-"Zippy Nelson"-"Don't-touch-any-buttons-or-switches-Senator Zippy"; to be cast back out into space where he can just hang out by a window once again while waiting for that "call from a Lobbiest with that big bag of money" for "Zippy" to show him around the "back rooms" of Congress, (as if a Lobbiest would even be interested in the "mailroom" where "Zippy" hung out for most of his career "franking" his useless missives that most of us lined our canary cages with...) !

Permalink Submitted by army op's vet on January 17, 2018 - 12:47pm
Ha.....Billy has always been a Flip Flopper....Anything at the time that HE thinks that will get him VOTES ...Look at what he did on Space Coast Space Program...He Flipped Flopped with Lying When Obama hit Brevard Co....saying THEY were For the Space Workers...Then after Obama got Elected...Dah..Space Program Defunded & Shutdown.....Billy was a Jerk in his Training Days of Going Up in Space Shuttle Spoiled Self Centered PUNK....when there was young REAL Astronauts been on LIst to go up in Space Shuttle & Punk Billy got there Spot......Your Time has finally Come ..2018 will be GOOD YEAR....HE will BE Gone...Ha...old Space Workers Remember

Flip-Flops must be his shoes

Permalink Submitted by Floridaboyee on January 22, 2018 - 11:20am
Flip-Flops must be his shoes of everyday living. He was a congressman from the Space Coast and demanded that he be an Astronaut, ONLY because it was being launched from his District. Then, somehow wormed his way into being a Senator. It is an embarrassment when he loves to be on television and he cannot talk. It is time he is VOTED out of office this year. Then, he can flip-flop ALL day long.

Permalink Submitted by Dave Manning on January 17, 2018 - 8:26am
Typical Democrat/Communist tactic, support liberal positions REGARDLESS of how it impacts your constituents. They hold their liberal politics above God, family, country and anything else. Pure hypocrites on any issue. Oprah/Weinstein2020!

Ah, settle down and stay out

Permalink Submitted by FL Native on January 17, 2018 - 8:01am
Ah, settle down and stay out of the name calling fray. Bill Nelson needs a rest home without a microphone.

Permalink Submitted by Big ben on January 17, 2018 - 7:35am
Bill Nelson bought and sold like the rest of the democrats. Losers! Worthless pieces of crap.

Nancy you are completely

Permalink Submitted by Angrybird on January 17, 2018 - 6:21am
Nancy you are completely WRONG and you should be ashamed of yourself for even attempting to go down this slippery slope of LIES. Anyone who has been a Floridian and TRULY environmentally ASTUTE of Florida's landscape would know that Bill Nelson has NEVER swayed nor COMPROMISED nor FLIP-FLOPPED on protecting our waters and shores. YOU NEED TO ERASE BILL NELSON IN YOUR TITLE AND PUT RICK SCOTT - you just lost my respect and are now and forever will be deemed a LIAR.

Wow, I have some more Kool