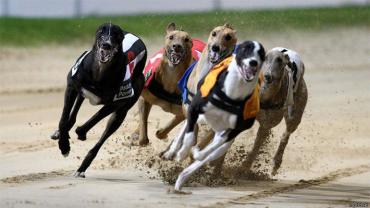 A bill to ban anabolic steroids in Florida greyhound racing is one step closer to becoming law in the Sunshine State. On Wednesday, the House subcommittee on Tourism and Gaming passed HB 463 after a lengthy debate over the safety and humane treatment of greyhounds in the racing industry.

HB 463, sponsored by Reps. Carlos Smith, D-Orlando, and Randy Fine, R-Brevard County, would ban anabolic steroids from greyhounds. Smith proposed a similar bill during last year’s legislative session, but the legislation died in the Senate and did not become law.

Smith’s bill would have widespread effects on the greyhound racing industry, which has been plagued by a variety of drug abuses, including steroids, in order to make dogs larger, faster and ramp up recovery times so dogs can ultimately become more profitable.

Steroids are considered the easiest, cheapest way many human athletes try to improve their performances, but dogs too have become users of the drugs.

“It is a violation of this section for a greyhound to have anabolic steroids present resulting in a positive test for such steroids based on samples taken from the greyhound before or immediately after the race of that greyhound,” the bill reads.

If an individual is found violating the ban, they would be subjected to a $10,000 minimum penalty and could have their racing licenses or permits suspended or revoked entirely.

The legislation raises the question of how dogs are treated in an industry which highly values profits on the backs -- and legs -- of 80-pound dogs.

Smith told the committee Wednesday he didn’t understand why greyhounds were held to different standards than people and human athletes, who are routinely penalized and banned from sports for using anabolic steroids and performance-enhancing drugs.

“It has a similar effect on humans that it does on dogs,” said Smith on steroid use. “They [steroids] are inappropriate for dog racing.”

Anabolic and androgenic steroids are considered a Class 3 foreign substance, and while the drugs are illegal, drug abuse has been found in racing dogs, some of which even tested positive for traces of cocaine.

While some organizations like Grey2K came out in support of the measure, other groups weren’t convinced.

The Florida Greyhound Association was particularly vocal about how it believes the legislation is misleading and provides misinformation about an industry which employs 3,000 people statewide. The group said they did not agree the drugs were performance enhancing and instead insinuated lawmakers were trying to end the practice of greyhound racing altogether.

Smith and Fine said they did not intend to end greyhound racing, which is still legal in the U.S. though its popularity has waned over the years.

Florida, Smith explained, would become a model for other states if legislators passed the ban.

“I think what will happen is that the dogs will be safely and as humanely as possible while greyhound racing still exists,” Smith said. “We as a state have a moral obligation to set the gold standard for how we are going to be treating these dogs fairly and humanely. The rest will follow.”

Sen. Dana Young, R-Tampa, has filed an identical measure in the Senate.

Wow, this is one of the most

Permalink Submitted by Patti Kacer on January 12, 2018 - 5:02pm
Wow, this is one of the most misleading stories I have ever seen written about steroid use in female greyhounds. It is NOT a performance enhancing drug, just like the minuscule amounts of a cocaine derivative isn't. Nor are there long term effects! And why, Mr Barton, since you so proudly represent your organization, do they give absolutely ZERO to greyhound adoption groups, were amazing absent when they alleged that greyhounds were in danger during Hurricane Irma (not one was harmed) and fail to support legislation that would make racing safer?

HOW DR ONOKUN RESTORE MY LIFE

Permalink Submitted by promise dickson on January 12, 2018 - 1:48am
HOW DR ONOKUN RESTORE MY LIFE BACK WITH HIS HERBAL MEDICINE. CONTACT DR ONOKUN FOR YOUR OWN HERPES CURE VIA +2349064844957 OR EMAIL: DRONOKUNHERBALCURE@GMAIL.COM Hello every one,my name is promise Dickson After 15 year of our faithful marriage my husband still cheated on me.i never knew my husband have herpes and he never tell me his wife that he has herpes,until i was noticing some changes in my body such as itching,tingling and burning:before the blister appear.so i decided to visit the hospital,and the doctor confirm me herpes positive.i was crying at the hospital,Because for Good 15 years of our marriage i have being faithful to my husband i never cheated on him.When i got home i told him that he cheated on me he denied to me.I ask him if he did not cheated on me, how come i contacted herpes.i was searching the internet on how to get the Herpes cure,i meet several comment.but i find out that most people who has being cure from this same herpes are all talking about doctor onokun herpes cure.so i mail him about my cure too and he reply my mail that same day,and i explain my present predicament to him and how i manage to get his contact.he request for my personal info wish i send to him.he told me that the herbal medicine is free,it not for sales.after much conversation,he send me the herbal medicine wish me and my husband use for 8 days as we were told by him.before that 8 days complete i found not that all the pain,itching e.t.c. were all gone.after 10 days me and my husband visit the hospital,what marvel me was that doctor confirm me and my husband herpes negative.i am here to tell the whole world to help me to thanks doctor onokun for restoring my life back to me and my family and to also let them know that there is cure for herpes although it has not yet being approve by the Government.if you are having herpes,cancer,epilepsy,ulcer or stroke e.t.c kindly email him via: dronokunherbalcure@gmail.com

The only reason to give

Permalink Submitted by Fred Barton on January 11, 2018 - 12:55pm
The only reason to give female greyhounds steroids is to interrupt their cycle is so that they can be more effectively exploited. Spaying them, or removing them to isolated kennels would cost money, and since a racing greyhound's only value to the industry is how much money she can make, it's no surprise that the industry uses steroids, even though their own literature, the Care of the Racing & Retired Greyhound, lists several adverse effects on greyhound health for doing so. I am a Board member of GREY2K USA Worldwide, an organization that fights to save these marvelous creatures all over the globe. (you can learn more about us here: http://www.grey2kusa.org.) I have fostered and adopted rescued racing greyhounds since 1995. I cannot imagine abandoning any of them when they become injured, old or sick and yet this is routinely what happens to them at operating tracks and will continue to happen as long as racing is allowed to exist. Fred Barton Board Member GREY2K USA Worldwide

Wow this article is quite

Permalink Submitted by ElizaN on January 10, 2018 - 5:24pm
Wow this article is quite misleading. Steroids used by racing greyhounds must be prescribed by a vet and the vast majority of the prescriptions are for testosterone given to female dogs to prevent estrus. Rather than conflating steroid usage and competition rules for humans vs. animals a more detailed discussion on why, how and how often steroids are prescribed for these animals and the reasons for the prescriptions is appropriate. The inflammatory rhetoric this article presents from both sides of the aisle is unfortunate when an interview with a veterinarian who prescribes these medications would be far more enlightening.

Why is it necessary to

Permalink Submitted by adam wendling on January 11, 2018 - 9:06am
Why is it necessary to prevent ovulation? Why not spay the dog if that is important? I understand human women athletes take oral contraceptives to control menstrual periods so as to not interfere with competition but that doesn't involve testosterone. Is it different in dogs? Why?

Permalink Submitted by Patti Kacer on January 12, 2018 - 5:09pm
Owners don't spay their girls, nor neuter their boys, until retirement. Doing so would eliminate the ability to breed, something that is important to carry on years of lineage and careful, controlled lines. For example, one of our retired racers goes back to England in the 1800's.