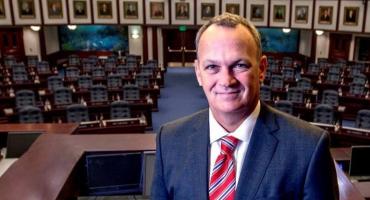 Perhaps they should not have been so politically correct. Certainly the organizers of the Hobe Sound incorporation effort made a point of saying little about the previous County Commission's arrogant treatment of Hobe Sound.

But make no mistake: Hobe Sound got the heel of what many consider now a corrupt county government willing to break the law and to ignore people's rights to attain the commission majority's zero-growth-at-any-cost objective.

“We had hopes of creating a positive working relationship between the county and the new town,” said Mike Ennis, president of the Protecting Hobe Sound organization, which now numbers 30 Hobe Sound residents. “We chose to take the high road and did not criticize or complain about the commission's actions toward Hobe Sound.”

That strategy seems to have come back to bite them. Now, it seems, the state intends to step on Hobe Sound, too.

By not delving into details of the need for incorporation to protect Hobe Sound and its small-town character, House Bill 395, the local bill sponsored by MaryLynn Magar, R-Tequesta, that would move Hobe Sound closer to an incorporation vote by residents, has yet to be placed on the state's legislative agenda  -- more than two weeks into the session that ends March 9.

Oddly enough, it stopped at the feet of Speaker of the House Richard Corcoran, the one state legislator whose reputation of strength is built on his abhorrence of corruption in government.

Corcoran, R-Land O'Lakes, who controls the House agenda, seems to be slamming the door on a victimized Town of Hobe Sound. Yet, just one year ago, the speaker and the Legislature gave unanimous approval to Indiantown organizers to hold an incorporation referendum, which passed, and a new Village of Indiantown was born.

“We just want the same right for our residents, to be able to vote on it,” said Ennis.

The Hobe Sound incorporation organization, which launched three years ago with five members, meets regularly and held more than 35 informational meetings for the public thus far.

“When Indiantown went to the Legislature, the entire Indiantown community was upset at the loss of EcoGen,” Ennis said. The biomass facility would have provided new jobs to Indiantown residents and a new crop for farmers at a time when Indiantown had suffered a loss of more than 300 jobs, primarily due to the decline of the citrus industry.

“It was something easy for the Legislature to understand,” Ennis added. “For them, the issue was economics, pure and simple. Indiantown had been held back economically by the county's policies, and they could show that.”

Hobe Sound's feasibility study also shows it will be easily self-sustaining, based on an annual tax base that exceeds $1 billion in taxable property. Although, unlike Indiantown, it has no manufacturing firms, the new Town of Hobe Sound also would have a surplus beginning with the first year, with a projected $10 million surplus at the end of five years -- without imposing a single new tax of its own, Ennis said.

They can do it by not creating its own police, fire and road departments. The county will continue to provide those services with taxes Hobe Sound residents are already paying.

Being feasible, however, seems not enough reason for Corcoran, who has said publicly that Florida has enough cities.

The speaker apparently is unaware -- or, perhaps, insulated by distance -- to the fact that two sitting Martin County commissioners, Ed Fielding and Sarah Heard,  and Hobe Sound's previous district commissioner, Anne Scott, are all under multiple criminal indictments for violating the state's ethics and Sunshine laws -- essentially abusing their power as commissioners.

A civil court has already ruled the county violated the Sunshine and public records laws as a direct result of the actions of Heard, Fielding and Scott.

Their determination to force a zero-growth policy in Hobe Sound was particularly damaging to its residents and to its small businesses. Although never previously a town, the 100-year-old downtown area was laid out decades ago and still has undeveloped lots, even as new shopping centers and strip malls spring up around them, threatening to undermine their desire for a vibrant, healthy downtown of their own.

The commission majority went so far as to threaten a family-owned restaurant in Hobe Sound, Flash Beach Grille, with a $1,000-a-day code enforcement fine for not following a Preserve Area Management Plan on its property, which the county had never recorded, thus preventing expansion of the business.

The restaurant owner requested a waiver for the PAMP because the county had not recorded it. The 40-foot easement was in a commercial area, bound on both sides by parking lots, stripped of all native vegetation and was not contiguous to any other natural area.

The County Commission majority of Fielding, Heard and Scott denied the owner's request. A lawsuit was required to force the county to lift the fine, to allow construction of its tiki roof and to tie all PAMPs to property deeds in the future.

The same commission majority refused to reimburse Hobe Sound more than $1 million in TIF funds, which had been misappropriated to the county's general fund as the result of a county property appraiser error. It was never reimbursed or reconciled.

The majority killed a fully funded CRA project that Hobe Sound had been planning for 14 years, which included the reconfiguration of a dangerous intersection traversed daily by dozens of schoolchildren and a retrofit of the town's main corridor to improve pedestrian, auto and bicycle safety. It also would have strengthened its small-town businesses, attracted others and helped prevent sprawl.

The majority also denied a mandatory rezoning of a project on U.S. 1 entering Hobe Sound that met county code and exceeded the requirements of the Comprehensive Growth Management Plan. To settle the Bert Harris lawsuit that followed these commissioners' unlawful action, they violated eight of their own Comp Plan rules -- writing amendments specific to this one development behind closed doors, with no public hearing -- to allow an assisted living facility to take the place of town homes, leveling the natural buffer of old pine-tree growth.

In 2016 Hobe Sound residents ousted their district representative, Anne Scott, a former judge from Chicago, who reported an annual income of $10 million when she served as commissioner, according to county records. She may well run for office again, and with her financial means, could possibly be re-elected -- perhaps posing to Hobe Sound an added threat -- retaliation.

“We had felt it was important to start our town out on the right foot with the county,” said Ennis,  “and although some actions by some county commissioners had tipped the scale for us to proceed with incorporation, our primary motivation was to preserve and protect Hobe Sound. It still is -- more now than ever.”

Hobe Sound's fate depends on the speaker of the House, and whether he believes that Hobe Sound and its residents deserve protection, to ensure they can chart their own course, or at the very least, give them a chance to vote on the idea.

Thank goodness this is being

Permalink Submitted by Tammee on January 24, 2018 - 7:56am
Thank goodness this is being delayed. There is no good reason for another layer of government. August 28 vote date? Why? So only those who are involved will vote on this "special" voting day. Not all of Hobe Sound will be incorporated? Sounds fishy, to say the least! Do NOT allow this to go forward!

Yes, this is the layer of

Permalink Submitted by Barbara Clowdus on January 24, 2018 - 8:40pm
Yes, this is the layer of government that gives citizens more direct control of the taxes they already pay, but now send to the county. The boundaries selected were the same ones that were drawn decades ago as the Urban Services District boundary for Hobe Sound in order to demonstrate that no landowner outside of the USB was getting special treatment. August 28 is the same date that the new county commissioners will be elected. It is not a "special" voting day. Any of the snowbirds who live in Hobe Sound still have the opportunity to vote by mail, which what they now do. Thank you for posting your concerns, so these issues can be clarified.

Is the non vote because the

Permalink Submitted by Whoitis on January 22, 2018 - 5:27pm
Is the non vote because the Negrons are against it?

When the Protecting Hobe

Permalink Submitted by Barbara Clowdus on January 22, 2018 - 11:20pm
When the Protecting Hobe Sound organizers asked their local delegation, which includes Sen. Joe Negron, and Representatives Gayle Harrell and MaryLynn Magar, for support of the local bill to allow a referendum, they all voted "yes." Sen. Negron questioned why the boundaries did not include the Ridgeway and Heritage Ridge communities (because the organizers simply felt it would be prudent to adopt the boundaries already established decades ago as the urban services district), but that seemed to be his only major concern -- that the town could have been larger than proposed. He's always indicated that he fully supports the initiative.

Please report on the position

Permalink Submitted by Barbara on January 22, 2018 - 8:03pm
Please report on the position that Joe Negron has taken on this issue. Voters have a right to know, especially those living in Hobe Sound

you should see Panama City

If incorporation fails this

Permalink Submitted by HSL on January 22, 2018 - 1:26pm
If incorporation fails this session, can Hobe Sound file again next legislative session?

No. They will need to wait

Permalink Submitted by Barbara Clowdus on January 22, 2018 - 1:42pm
No. They will need to wait five years to resubmit, which will require a new feasibility study, as well as a supportive local delegate willing to write the local bill.

I have lived in Martin County

Permalink Submitted by Mike on January 22, 2018 - 9:46am
I have lived in Martin County since 1982, the article hits the nail right on the head! The former Commission majority led around by the nose by former commissioners Hurchalla and Meltzet have been damaging our communities for decades. Their most recent corrupt activities have cost the taxpayers over $20,000,000 in litigation and settlement costs, the river they proclaim to be protecting is littered with dead fish, algae, and devastating pollutants, all while the flush their own toilets into their polluting septic tanks on the river and its tributaries! Speaker Corcoran, PLEASE DO THR RIGHT THING, stop the madness and allow Hobe Sound to incorporate. Thank you.

"I'm from the Government, and