Baloney, Reason Report: Florida's Highways Are a Source of Pride 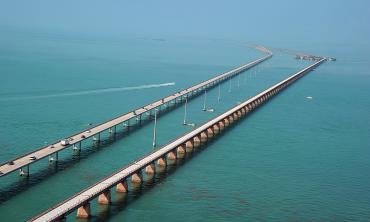 I knew it the minute I read it. The Reason Foundation's report on the state of the nation's roads, released Thursday, is dead wrong.

Please believe this: I'm nothing, if not well-traveled. I've driven in 48 of the nation's 50 states, most of them extenively. And I can tell you, every single time --after every one of those trips -- it's a joy and a relief to drive back over the Florida line, onto roads I know aren't going to blow one of my tires, knock my wheels out of alignment or send me off on a dirt-road detour where I can spend an hour getting tossed around like a pea in a tin can.

I've said "thank you, Florida" more than once.

So, Thursday -- in spite of Reason Foundation's considerable bonafides -- I read its 22nd annual highway report, as I did its 21st, with more than a little skepticism.

Reason claims the state's overall ranking has worsened, it was 31st in the previous report.

Some of the findings:

So, I asked the Florida Department of Transportation about all this. How can it be that roads in other states where I visit regularly, roads I see (and feel and read frightening reports on) ... how can they be ranked higher than Florida's?

How can Mississippi, for goodness sake, where it takes MDOT six months to patch a pothole on Old Spanish Trail, be ranked 10th?

Mississippi is a state where we own a home. I just paid my $550 annual Mississippi tag fee, only to find out less than one-sixteenth of it will go to fix roads or build needed new ones. I wonder how the Magnolia State reports that one to Reason.

Graft and corruption, thy name is MDOT.  (And I don't have to back that up, every couple of years newspapers in Mississippi win investigative prizes exposing the continuing MDOT boondoggle.)

At any rate, FDOT got back to me Friday with its response to the Reason Report.

"Under Gov. Rick Scott, the Florida Department of Transportation made record investments in the state’s transportation system and Florida continues to have some of the best transportation infrastructure in the country," FDOT says.

And listen to this:

This was FTC Chairman Jay Trumbull's quote at the time. “Gov. Scott has focused on job creation across Florida and transportation investments are a direct impact on growing our economy. I congratulate Secretary Boxold and the Florida Department of Transportation on its ability to consistently meet the capacity and mobility needs of its people, businesses and visitors while investing its budgeted dollars efficiently and effectively. FDOT gets an ‘A’ on its report card.”

Matthew D. Ubben, current FTC executive director, clearly believes the Reason Foundation got it wrong. When he saw the Reason  Foundation report, he fired out the following statement:

“Approximately 52 percent of the Florida Department of Transportation budget goes toward the preservation and maintenance of the existing transportation system, yet this is factored against Florida in the overall rankings.

"The ‘maintenance disbursements per state-controlled mile’ indicator works against states that have made policy decisions to preserve its existing system, as we have done in Florida. The bottom line is, if a state’s highways and bridges are in good condition by spending a greater percentage of resources, then by Reason’s methodology, we can end up near the bottom of the cost effectiveness rankings.

"This flawed methodology fails to reflect actual road and bridge conditions experienced by our 20 million citizens and 100 million annual visitors who travel on some of the best pavement conditions in the nation.

"For this reason, we agree with the assessment by the Federal Highway Administration, the data source used in the analysis, that highway statistical information is not easily comparable across states.”

It makes perfect sense to me. Look at the four top-ranked states in Reason's ranking -- South Carolina, South Dakota, Kansas and Nebraska. Now compare their road-building challenges with Forida's -- or almost any other state's.

Ubben reminds me that FDOT currently maintains 12,110 miles of the public road system, split between rural areas and cities.

"Although the State Highway System consists of only 10 percent of the lane miles in Florida, it carries more than half of Florida’s total traffic," he says. "The remaining 90 percent of roadways are maintained by either counties or cities. Since 1984, the number of highway system miles has increased by 26 percent, while the daily vehicle miles traveled increased by 90 percent."

In case you're wondering, the FTC is an appointed body that provides performance and fiscal oversight of FDOT. It's a big deal. It also makes transportation policy recommendations to Scott and the Legislature.

Meanwhile, I'm still trying to recollect. I've been a reporter or an editor in tourist-rich Florida since 1977 and not once can I remember getting a call from a visitor complaining about Florida's roads.

OK, the visitor-complaint thing is hardly a scientific conclusion, but it means something to me. I've always been proud of Florida roads. And frankly, I think the folks at FDOT deserve more praise and a lot less Reason.

Permalink Submitted by Roger on September 26, 2016 - 2:15pm
The biggest roadway problem we have in our county is potholes and faded stripes to delineate lanes, turn arrows, etc. Current county estimates indicate a "backlog" of street and road maintenance in excess of $250,000,000 !

I do not agree with you on

Permalink Submitted by balance of power on September 26, 2016 - 8:56am
I do not agree with you on this. Florida has made meager investments in expansion and infrastructure. The roads here last longer because there is no snow or salt, but Florida is abysmal in infrastructure, transit and expansion. For having 400 people move to Florida everyday the investment in infrastructure and expansion is abysmally 48th in the nation per capita. That is a very sad showing for the sunshine state...

Funny you would expect the

Permalink Submitted by William on September 24, 2016 - 4:01pm
Funny you would expect the roads to be in total disrepair as none of Florida state workers have received a raise or a cost of living increase in almost ten years. This includes DOT. This tells me one thing, these people take pride in their work, the roads they maintain, and the new roads they build. Thank you FDOT for a great job.

There is not a single

Permalink Submitted by David on September 24, 2016 - 3:52pm
There is not a single interstate interchange lighted in South Carolina. None of them! One can only hope the fireworks stores are not closed as you drive by or you would never know you passed an off ramp.

Having traveled through every

Permalink Submitted by Voice of Reason on September 24, 2016 - 11:33am
Having traveled through every state from Canada to the Keys on the East coast, I have to agree that FL has it together with our roads.

Right on, Nancy! All you

Permalink Submitted by Jim Phillips on September 24, 2016 - 9:26am
Right on, Nancy! All you have to do is travel South Carolina's Out-dated 4 lane I-95 & I-26 to see that the report is misguided. Except for traffic congestion in the larger cities, Florida looks good by comparison .

I was going to say the exact

Permalink Submitted by Voice of Reason on September 24, 2016 - 11:31am
I was going to say the exact same thing. I occasionally travel from FL to NY and have named SC the 'White Knuckle' state. Even cut vacation short a day to be past SC when the hurricane was coming through earlier this month specifically to avoid 95 through SC as there is only mere feet between trees and the road.

Having travelled almost as

Permalink Submitted by jrogerg on September 24, 2016 - 9:25am
Having travelled almost as much as Nancy, Florida has the benefit a lot of others states miss - no frosts to wreck roads. That FL spends less on roads is not a measure of how good or bad they are silly choice, its a fact of not having pot holes breeding like mosquitos.

This article has been bought

Permalink Submitted by Sally on September 24, 2016 - 8:01am
This article has been bought and paid for by Rick Scott. Nancy you live in lah lah land.