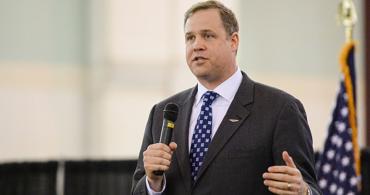 But the two Floridians who will have a say about the appointment aren't embracing last week's pick.

Space Florida CEO Frank DiBello called Oklahoma Republican Congressman Jim Bridenstine “a dedicated student of the industry and a passionate champion in Congress for the maturation of the space economy.”

“He will no doubt apply the same knowledge, dedication, and passion to the leadership of NASA, for the benefit of all space stakeholders,” DiBello said in a prepared statement. “New leadership at NASA, combined with the regeneration of the National Space Council and passage of the NASA Transition Authorization Act of 2017, will provide the guidance and stability necessary for NASA to continue to explore new frontiers, advance technology and sustain U.S. leadership in space.”

Bridenstine, in line to become the 13th administrator of NASA, is a third-term member of Congress and a pilot in the Oklahoma Air National Guard. He has degrees in economics, psychology and business from Rice University and an MBA from Cornell.

Bridenstine started his military career as a U.S. Navy pilot and served as executive director of the Tulsa Air and Space Museum & Planetarium.

It's what is not in his resume that is a concern for U.S. Sen. Bill Nelson, the top Democrat on the Senate Commerce, Science, and Transportation Committee, which is the first stop in the confirmation process for Bridenstine.

“The head of NASA ought to be a space professional, not a politician,” Nelson said in a statement.

Nelson, of course, is protective of NASA after flying on a space shuttle in 1985 while a member of the U.S. House. And while Bridenstine has advocated mining the moon for fuel, he has also denied that human activity has had a role in climate change.

Meanwhile, Rubio told SpaceNews that while not taking a position on Bridenstine's confirmation, NASA “cannot afford controversy or a delay in the nomination process.”

“NASA is at a critical juncture in history, and it is important that its mission remains free of politics and partisanship,” Rubio told SpaceNews. “I want to be without reservation because the space industry is too important to Florida's economy.”

Bridenstine, who backed U.S. Sen. Ted Cruz, R-Texas, for president in 2016, would be the first administrator from the politician class, but not every past leader has been a scientific rocket man.

Sean O'Keefe, who served under President George W. Bush, had previously been a deputy director of the White House Office of Management and Budget. James Webb, who led NASA through its early years, was an attorney, oil-company executive and had worked in the State Department.

Gov. Rick Scott, as expected, stayed away from the topic of climate change on Wednesday. But he wasn't ready to embrace conservative radio giant Rush Limbaugh's assertion Tuesday that the threat of Hurricane Irma was some sort of exaggerated media science conspiracy.

“This is one of the few storms that has ever been in the Atlantic with 185 mph winds, and it's big,” Scott said Wednesday while at the State Emergency Operations Center in Tallahassee. “It's way bigger in size than Andrew.”

The governor had been asked to respond to comments that Limbaugh, a Palm Beach resident, made earlier on air that linked an exaggerated threat of hurricanes to people advancing a “climate change agenda.”

Scott, who issued a state of emergency on Monday for all of Florida because of the ominous storm, said he hadn't heard Limbaugh's actual comments.

“You can accomplish a lot just by creating fear and panic,” Limbaugh said on air and in a transcript posted on his website. “You don't need a hurricane to hit anywhere. All you need is to create the fear and panic accompanied by talk that climate change is causing hurricanes to become more frequent and bigger and more dangerous, and you create the panic, and it's mission accomplished, agenda advanced.

“Now, how do you do this? Well, any number of ways. Let's take South Florida television, for example. There is symbiotic relationship between retailers and local media, and it's related to money. It revolves around money. You have major, major industries and businesses which prosper during times of crisis and panic, such as a hurricane, which could destroy or greatly damage people's homes, and it could interrupt the flow of water and electricity. So what happens?

“Well, the TV stations begin reporting this and the panic begins to increase. And then people end up going to various stores to stock up on water and whatever they might need for home repairs and batteries and all this that they're advised to get, and a vicious circle is created. You have these various retail outlets who spend a lot of advertising dollars with the local media.”

“I believe that this is a risk,” Scott said. “We can always pray that this thing is going to somehow turn east and just go out into the Atlantic and not touch any part of the United States. But right now, we're going to do the right thing. And I expect every citizen to prepare and get ready for this.”

State Rep. Jay Fant, a Jacksonville Republican running for attorney general, sent out a hurricane reminder Wednesday from his campaign advising “everyone to stay vigilant, be prepared, and be educated.”

He also provided a “notice to Florida gun owners” of a 2015 law that allows people who don't have concealed-weapons licenses to carry their legally owned guns while evacuating during a declared emergency.

The law, which took two years to get through the Legislature due to concerns by law-enforcement officials, allows people to carry guns without concealed-weapons licenses for 48 hours during mandatory emergency evacuations. The law only applies to people who legally own guns.

Fant was one of 17 House members listed as co-introducers of a bill sponsored by Rep. Heather Fitzenhagen, R-Fort Myers.

TWEET OF THE WEEK: “Anyone w/elder parents in So FL who could use a hand with last minute hurricane Irma prep let me know.” --- former Florida Chief Financial Officer Jeff Atwater (@JeffAtwater), currently CFO and vice president of strategic initiatives at Florida Atlantic University in Boca Raton.

Being an Apollo Brat that dad

Permalink Submitted by Army op's Vet... on September 8, 2017 - 12:12pm
Being an Apollo Brat that dad worked Nasa from the 60's....Neither Billy or Lil man Rubio know Quat of Space Industry.....I would Shuttle when Billy Nelson was SO-CALLED Astronaut...he was a real Stuck on his Self PUNK....his Political Crap booted some Great Trained for Years young Men being a TRUE Astronaut from going up in Shuttle cause his Placed on that Flight....THEN 2008 he Turned OpieBama Boy and Space Shuttle Ended....Politics run the Apollo Program (that why 3 Astronauts burned in Capsule ) & Politics run the Reason Challenger Astronauts DIED......ALL POLITIC's were DEMOCRAT.....So now Pres.Trump wants a Non Politic Boss (a Buisness Man) for Nasa THESE SO CALL PUNKS scream foul......I'm Sure Pres.Trump new man will STOP Nasa Waste of Taxespayers Money on way Nasa waste money on OVERPAID PRICE GOUGING Contractors.....That another thing I saw years working Space Shuttle.......SO BILLY & MARKY....Shutup and go home cause in 2018 BOTH of YOU will be VOTED OUT of anything to do For FLORIDIANS in D.C......

Permalink Submitted by Mark on September 8, 2017 - 10:00am
Typical negative Bill Nelson and his downward comments are simply no longer needed here, in Florida or, in our country. He's been okay at his job supporting NASA (as he should) but now many of his lame arguments against whatever are simple, tired, gloom & doom Nelson talk! It's time for Bill to retire.