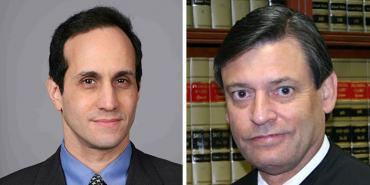 A national report has focused a spotlight on the background check Gov. Ron DeSantis and the Florida Cabinet did before hiring Ronald Rubin as the state’s chief financial regulator.

Rubin was placed on administrative leave earlier this month, amid an investigation into a sexual-harassment complaint. Since then, other accusations --- including comments about “old” employees and “rednecks” --- have been leveled against the Office of Financial Regulation commissioner.

Bloomberg Law on Monday published a detailed report exposing allegations of past inappropriate behavior by Rubin toward female colleagues and inconsistencies in his self-reported employment history.

When asked about the Bloomberg story, two Florida Cabinet members said they were unaware of potential misconduct by Rubin before signing off on his appointment to the $166,000-a-year job in February. DeSantis and Agriculture Commissioner Nikki Fried did not respond.

Chief Financial Officer Jimmy Patronis’ spokeswoman, Katie Strickland, said Tuesday there were no revelations of prior issues with Rubin before he was hired.

“I want to make it absolutely clear that neither the CFO nor anyone in our office had knowledge of any misconduct committed by Commissioner Rubin previous to the complaints we recently received,” Strickland said in an email.

Patronis, a Panama City Republican who championed Rubin for the post, announced on May 10 that Rubin had been placed on administrative leave amid an investigation into alleged inappropriate behavior.

“The office was unaware of past allegations at the time of Rubin’s nomination,” Moody spokesman Whitney Ray said in an email Tuesday.

Ray also included in his response a Feb. 19 letter, requested by media outlets, sent by Patronis to Moody, Fried and DeSantis, in which the chief financial officer touted Rubin for the spot.

“Mr. Rubin has experience working for the U.S. Securities and Exchange Commission, the U.S. Consumer Financial Protection Bureau and the Broward County State Attorney’s Office,” Patronis wrote. “It is important we ensure that Florida’s consumers are protected while also facilitating a pro-business environment within the financial services industry.”

A week later, DeSantis and the Cabinet voted to hire Rubin for the industry-watchdog position, filling an opening created last June when the previous commissioner resigned under pressure from Patronis.

Patronis has directed his inspector general to begin a preliminary investigation of allegations leveled against Rubin by state employees. There is no timeline to complete the investigation. The next Cabinet meeting is scheduled for June 4, after DeSantis and the Cabinet members return from a trip to Israel.

“The findings of the Inspector General’s investigation will be presented as soon as the report is complete and all interviews have been conducted,” Strickland said. “The CFO believes that victims of sexual harassment or discrimination deserve to be protected and to have their voices heard.”

Of the 30 applicants for the post, Rubin was one of two people who were interviewed. The Cabinet moved to request additional applications after interviewing a first round of finalists last June.

Rubin’s resume said he is a freelance writer, and served in 2015 as senior counsel and chief adviser for regulatory policy on the majority staff of the U.S. House Committee on Financial Services. His time working for the committee overlapped DeSantis’ tenure in Congress, according to his resume.

But according to Bloomberg Law, Rubin’s resume contains inconsistencies. The report also said 12 individuals alleged Rubin behaved inappropriately toward female colleagues during his tenure in Washington, including while he worked at the Consumer Financial Protection Bureau.

“Several women who worked with Rubin at the CFPB and other places he was employed in Washington told Bloomberg Law he had a habit of making sexually inappropriate comments that made them uncomfortable,” the Bloomberg Law article said. “The inappropriate behavior included an invitation to his home and frequent comments on women’s height, weight and general appearance.”

Rubin also had a reputation of being willing to criticize the bureau, however, which elevated him in the eyes of House Republicans who wanted strict oversight of an agency they viewed as aggressive and politically motivated, Bloomberg Law also noted.

In his application for the Florida post, Rubin said he left the committee in September 2015 to work as a volunteer for U.S. Sen. Marco Rubio’s 2016 presidential run.

But according to Bloomberg Law, Rubin was fired from the House committee “due to allegations of sexual harassment deemed credible by the committee.”

Rubin declined to comment for the Bloomberg story, and did not respond to requests for comment by The News Service of Florida.

NOTHING TO SEE HERE

In the eyes of the man who ran the state’s top court the past four years, the exit of three justices who were part of what was considered a liberal-leaning majority hasn’t resulted in an ideological shift.

“Everybody is doing what they feel the oath requires them to do. It is to look at the law, as they see it, and rule based on that,” Labarga, who completed his second term as chief justice last summer, said.

When asked about an “ideological shift” on the high court, Labarga said: “I don’t see that. Our discussions certainly haven’t changed any since, before or after.”

On the same day the governor took office in January, former justices Barbara Pariente, Peggy Quince and R. Fred Lewis were forced to step down because they had reached the state’s mandatory retirement age. DeSantis replaced the trio with more conservative justices, who joined three other conservative justices --- Chief Justice Charles Canady, Ricky Polston and Alan Lawson --- already on the bench.

The revised court’s first actions included the reversal of a pair of 4-3 decisions issued by the old court just days before the retiring justices stepped down. Labarga, who was in the majority in the previous rulings, was the only dissenter in the new decisions.

“All seven of us are good friends,” Labarga claimed of the new court lineup. “We get along great. Occasionally, we disagree. In many instances, we agree.”

The court will “continue doing the same things we have always done,” Labarga predicted.

TWEET OF THE WEEK: “If Florida State University’s B. K. Roberts Law School building is not re-named the Talbot “Sandy” D’Alemberte building by this time next year, many will be deeply disappointed....and very surprised.” --- Florida State University professor Davis Houck (@davishouck), following the sudden death Monday of D’Alemberte, a former FSU president and onetime dean of the school’s College of Law.

Permalink Submitted by NoTrump2020 on May 24, 2019 - 12:15pm
If political parties actually did thorough background checks on their candidates ... would the Republican party have EVER approved Donald Trump to be a candidate and, then, the party's actual nominee for president??? A demonstrable liar, cheater, adulterer, tax scofflaw, and draft-dodger???

Major gaffe, and sad state of

Permalink Submitted by Tru FL Indy on May 24, 2019 - 10:10am
Major gaffe, and sad state of the Judiciary these days, almost a partisan as the fools appointing them...