All But One Constitutional Amendment Passes 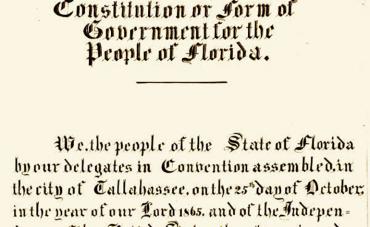 In the end, "bundling" amendments -- that is, lumping more than one issue into a single ballot measure, didn't turn voters off, because 11 of the 12 amendments passed handily, with more than the required 60 percent of the vote.

The only amendment to fail was Amendment 1, which was created and adopted by the Legislature and would have mandated a property-tax exemption increase. All of the  amendments placed on the ballot by the Constitution Revision Commission passed Tuesday.

They will go into the Constitution and take effect on Jan. 8.

Florida’s Constitution Revision Commission (CRC), which convenes every 20 years, is allowed by law to bundle more than one issue into each question. An example of the CRC’s issue bundling in 2018 is Amendment 9, which asks voters to decide whether to ban offshore oil drilling, and whether to ban e-cigarettes at workplaces. Like the CRC’s other bundled amendments, this was an all-or-nothing proposition.

"My husband and I made up our mind we were going to vote 'no' on every amendment that covered multiple topics," Betty Claiborne of Tampa told Sunshine State News Tuesday morning.

Of the 12 amendments on this year’s ballot, seven were proposed by the CRC, three by the Florida Legislature and two by citizen initiative.

Here, again, are the final results:

Permalink Submitted by RJ Pozzi on November 12, 2018 - 2:23pm
Ms. Smiths conclusion is far off, in my opinion. They werent NOT turned off they are over it. The Voters have been broken down and distracted to be able to decipher those Amendments that were intentionally written to confuse the issues. Secondly what captured citizenry would vote for MORE taxes? That in and of its self proves the mass hysteria and or manipulated realities all to support and grow the Redistributive Ponzi scheme that is our Public School System! Its 2018 for chr t sake, there are better ways, cheaper ways to actually Educate. The problem is those voting have been Educated by the current system and are thoroughly indoctrinated to accept, comply and support it as is. Insanity!

I'm disgusted with the fact

Permalink Submitted by Jon chapman on November 8, 2018 - 9:15am
I'm disgusted with the fact that voters don't take the time to read. A Facebook add comes up and they blindly follow what seems like a good idea without looking at any of the opposing views. No one can even fathom the unintended consequences of putting something in the Constitution with little hope of ever changing it back! The CRC needs to be abolished. The legislature needs to do its job and codify and enforce laws already on the books.

When the CRC was established

Permalink Submitted by David Woodward on November 7, 2018 - 12:02pm
When the CRC was established umpty-jillion years ago (I was in law school at the time) its brief was to "harmonize" the constitution, not bypass the legislature: to eliminate amendments governing the size of pigpens and the like. Deadly Dave, my constitutional law professor, said that some issues do not rise to constitutional stature! Now we are back in contest with Georgia and others in the race to have more amendments than Articles.

Permalink Submitted by VoteBlue! on November 7, 2018 - 11:37am
Unbelievable! Just proves what a wacky bunch of voters exist in Floriduh!

Thank God that the

Permalink Submitted by C Breeze on November 7, 2018 - 9:04am
Thank God that the "Constitutional Revision Commission" ONLY meets once every 20 years..! Maybe we can abolish the "CRC" altogether,... because...collectively, voters are not smart enough, nor "reading comprehension ability" astute enough to discern what is actually printed in plain english, and placed right before their very eyes... ( in an intentionally "confusing manner", I might add... Similar to "multiple issues" placed in a 'Legislatively created law'...called "Packing The Tree"; which is ALSO "designed & intended" to confuse and manipulate "We The People" into BAD legislation, of one sort or another, painlessly and unknowingly,...[at least, at first]...)