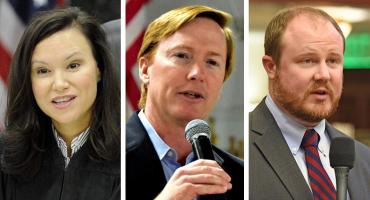 Voters and candidates from across the Sunshine State gathered in Jacksonville on Saturday afternoon for a straw poll held by WBOB.

Ed Dean, a senior editor for Sunshine State News whose radio shows can be heard on WBOB every morning and across Florida every day, launched the straw poll while Kent Justice from News4Jax moderated it. The event was held at the Salem Centre on the Southside of Jacksonville.

Supporters for other candidates, including Republican gubernatorial hopeful U.S. Rep. Ron DeSantis, state Rep. Jay Fant who is running for the Republican nomination in the attorney general race and state Sen. Denise Grimsley and former state Rep. Baxter Troutman, who are both running in the Republican primary to be Florida’s next agricultural commissioner, were also out in full force. Mark Zeigler, who is running for the Republican nomination in state House District 15, also attended the event. There were also numerous candidates for local offices in the area. Supporters of term limits, including Nick Tomboulides from U.S. Term Limits, made the case to add an amendment to the state Constitution to add term limit school board members across the state.

In a hypothetical matchup, Jacksonville Mayor Lenny Curry took 95 votes and City Councilwoman Anna Lopez Brosche pulled 46 votes. Asked if Jacksonville should sell the JEA,   46 said yes and 97 said no. Asked if the state Constitution should be amended to include term limits for school board members across the state, 128 said yes and 22 said no.

I can't stand the negative

Permalink Submitted by Rosemary McDaniel on April 18, 2018 - 3:14pm
I can't stand the negative ads being played against Ron DeSantis whom I am supporting. The best thing is, his name is getting out there and his recognition will be greater. Someone is really, really, frightened by DeSantis. Just who might that be?

Permalink Submitted by William J. on April 16, 2018 - 2:27pm
Great opportunity to introduce my soon to be voting age son to the rough and tumble world of Florida politics. Although he did not want to attend, once there he was as engaged as most anyone.

I guess Wyman Duggan was too

Permalink Submitted by Jackson D'Ville on April 16, 2018 - 7:04am
I guess Wyman Duggan was too busy to make the 12 mile drive from his posh estate to mingle with the little people.

Adam Putnam needs to go away.

Permalink Submitted by RepublicanConscience on April 16, 2018 - 6:37am
Adam Putnam needs to go away. He has been mediocre at best at his Agricultural job, and worst as a Republican because he sucks on property rights. BTW, Property Rights were foundation of the term, "Pursuit of Happiness." Florida is losing the best Governor in my lifetime to term limits. I think that DeSantis will do a great job replacing him. Rick Scott will hold his new Senate Seat for 6 years, when he will become President of the United States in 2024. You heard it first right here and right now.

Permalink Submitted by C Breeze on April 15, 2018 - 7:49pm
This 160 vote poll too meaningless and miniscule to regard with any confidence... BE SURE TO TURNOUT AND VOTE FLORIDIANS: THAT'S THE ONLY TRUE SIGN OF ASSURED VICTORY !

There were many patriots in T

Permalink Submitted by Lynn on April 15, 2018 - 4:54pm
There were many patriots in T'hasse that day and were not able to vote. The numbers mean nothing.

Adam Putnam should be our

Permalink Submitted by Tampaguy on April 15, 2018 - 9:25am
Adam Putnam should be our "replacement" SENATOR- get rid of tired old Bill Nelson...