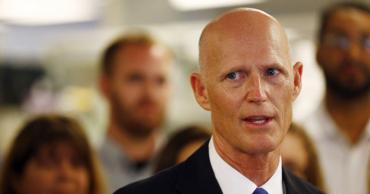 Senate Bill 2500, Florida's 2017-2018 $82.4 billion budget, arrived on Gov. Rick Scott's desk Wednesday, a month from the start of the new fiscal year. And now attention shifts from lawmakers who held it until they were good and ready, to the governor who hasn't tipped his hand on how much of it his veto pen will cancel out.

Scott has 15 days to decide how he'll move on the massive document, but many speculate he is widely unhappy with several components and is prepared to use the power of veto to tell lawmakers to try again.

Scott now has three choices: He can accept the entire bill (most likely implausible), he can line-item-veto portions or he can veto the entire product.

Though he's only used it once, a line-item veto isn't totally out of the question. But a more likely scenario would be if Scott cut heavy swaths out that would be difficult to override, but didn't give Senate President Joe Negron or House Speaker Richard Corcoran a chance to rewrite the whole bill and perhaps make it less acceptable to Scott than it is already.

After one of the most contentious legislative sessions in recent memory,  lawmakers have created the perfect storm of elements to set up a full veto, which is why no political observer is ruling out that option.  For months, the House of Representatives chipped away at Scott's twin pride and joy, Enterprise Florida and Visit Florida, essentially gutting the former while slashing the budget for the latter.

Scott says the programs are pivotal to promoting Florida tourism and bringing more jobs to the state -- something around which the governor has largely centered his last seven years in office, and both measures that have met with success.

Corcoran and Scott already had bad blood before the session began in March, but with a budget leaving Enterprise Florida high and dry and taking away nearly $50 million from Visit Florida, those wounds still sting.

Some have considered a budget veto a slap in the face to Corcoran and another tool for political payback from Scott. If Scott vetoes key parts of the budget -- education, for example -- legislators would need to return to Tallahassee once more for a special legislative session to finalize a new K-12 budget plan.

Corcoran and state lawmakers could still emerge victorious from the wrath of Scott's red pen. If they're able to gather two-thirds of votes, legislators could play hardball and override the governor's veto entirely.

Scott has been mostly quiet about his plans regarding this year's budget, adding an air of mystery to the upcoming weeks. That's slightly unusual for the governor, who just last year announced he would veto more than $250 million in projects before he even took a glance at the budget bill.

The clock is ticking. The governor now has until June 15 to do his part.

In the meantime, Scott is being pressured to call special sessions on other issues and "bills gone bad" -- notably, medical marijuana and land acquisition.

Permalink Submitted by just the facts on June 1, 2017 - 10:42am
typical political back stabbing. Crazy thing is, it is between the same party. I hope he line item vetoes the crap out of it and rejects that piece of chit school bill. Otherwise, they will override his full veto and we'd be stuck with that mess...

Governor: This is your chance

Permalink Submitted by C Breeze on June 1, 2017 - 9:14am
Governor: This is your chance to "STEP OUT" as the "Statesman" we all knew you were capable of being... in order to "Tamp Down" the tendency for corruption that Florida's Legislature 'always leans toward'..... (YOUR "stewardship" has been admirable; "step away PROUD"! ! !)................ (So we can FINALLY FORGET Florida's hyper-politicized time in the "Bushes")

We need more detail about the

Permalink Submitted by Linda Christmann on June 1, 2017 - 6:00am
We need more detail about the budget on his desk. Where are the cuts? Where is the fat?

Some needs to go to community

Permalink Submitted by Audwin Scott on May 31, 2017 - 9:20pm
Some needs to go to community colleges,such as SPC College!

I hope it goes back to

Permalink Submitted by Rick Bain on May 31, 2017 - 9:02pm
I hope it goes back to Special Session not for the budget but for you know what!!! Yes, medial marijuana, people need to figure out that weed is not bad, definately not as bad as beer and liquor!!! Many peps like myself suffer daily on meds that Doctors say we are taking the maximum amount and it doesn't matter that we are suffering now not just from our pain due to our condition but also from fear of withdrawl from a medicene that the government and insurance companies control. It sickens me to know that my well being is not determined by my doctor, but from these political hacks that someone else voted for, and the ones that I voted for won't return any of my half dozen emails that I have sent. Marijuana has been used for medicene for thousands of years and for fun maybe a tenth of that, and those people like I use to be that use it for weekend fun with their friends don't wake up the next day months down the road or even weeks maybe yearning for more like the alcholics of this world do. If we can get more and afford it ok maybe we down but our brains are not demanding we do like a herion addict!!!