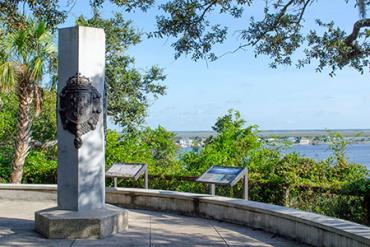 Situated on the Timucuan Ecological and Historic Preserve and overlooking the St. Johns River, the view from the Ribault Monument is one of Jacksonville’s hidden gems. From that point on St. Johns Bluff, you have a commanding view of the river with a nice panorama of human activity, marshlands, trees and the open sky.

You’re close enough to the Atlantic to enjoy the breezes and even pick up hints of the smell of saltwater in the air. Having been coming to the monument for three and a half decades to enjoy the view, I still find myself surprised, especially when one of the barges or even a cruise ship sails by.

Standing there, you can’t escape history’s ebb. The monument is a replica of a stone column that French explorer Jean Ribault placed along the St. Johns River in 1562. Ribault returned three years later to help the struggling Huguenot colony established in Florida and was captured and killed along the banks of the Matanzas River by the Spanish after he refused to renounce his Protestant faith. When the Daughters of the American Revolution created the Ribault Monument, the group praised the French explorers for helping bring Protestantism to America, a pretty telling point in the 1920s, not long after Florida elected Sidney Catts whose opposition to Catholicism was one of the main features of his gubernatorial campaign.

The preserve is one of the main legacies of Charlie Bennett, the longest-serving congressman in Florida’s history. Bennett is probably best known for never missing a roll call vote during his 44 years in Congress and for helping put “In God We Trust” on our currency. He was also an amateur historian who helped preserve Florida’s history through establishing  Fort Caroline National Memorial and, later, the Timucuan Ecological and Historic Preserve. Bennett also wrote a series of books covering the Sunshine State’s history, ranging from the colonial periods to the early republic and biographies of French explorers, Scottish rogues and American generals whose lives were entwined with Florida.

I first met Bennett in 1993 when I was a senior at Wolfson High School and he had just retired from Congress and was teaching at Jacksonville University. I had purchased Bennett’s and Donald Lennon’s biography of Major General Robert Howe who commanded American forces in the South during the early stages of the Revolution and who led unsuccessful efforts to take East Florida from the British. Bennett and Lennon made Howe come alive despite his obscurity. They captured Howe’s humanity: his friendliness, his womanizing, his humor, his love of Shakespeare and his pomposity. It was something of a revelation for a kid who loved history but generally stuck to the textbooks and saw the Founding Fathers as a collection of stoics, more like demigods than actual human beings.

Bennett offered new perspectives for me while at the same time offering powerful reminders of how important history is to Florida and to the nation. As the state’s population constantly turns over and new towns seem to spring out of nowhere, it’s easy to lose sight of history. It’s a problem here in Florida and across the nation.

As he so often did, Roger Sherman, one of the most important Founding Fathers despite his current obscurity, showed great wisdom when he pointed to one of the reasons how a republic could collapse. “Sad will be the day when the American people forget their traditions and their history, and no longer remember that the country they love, the institutions they cherish, and the freedom they hope to preserve, were born from the throes of armed resistance to tyranny, and nursed in the rugged arms of fearless men,” Sherman wrote.

Even among the Founding Fathers, Sherman, the only man to sign the Continental Association, the Declaration of Independence, the Articles of Confederation and the Constitution, held a special place. Thomas Jefferson praised Sherman as “a man who has never said a foolish thing in his life” while Fisher Ames mused “if I am absent, during the discussion of a subject, and consequently know not on which side to vote, I always look at Roger Sherman, for I am sure if I vote with him I shall vote right.”

Well, Sherman was over the target with how important traditions and historic knowledge are to the American experiment in republican government. It’s something I tried to keep in mind at Sunshine State News throughout the past decade, even as the sun sets on the site. Too often Florida’s history has been bulldozed over to make way for new condos, theme parks and strip malls. It’s unfortunate. Not only is Florida the prettiest of 50 sisters, she is also the oldest, a point that the Viva Florida campaign tried to make in 2013 to mark the 500th anniversary of Juan Ponce de Leon’s expedition.

History continues to shape all of us even as we seem more than ever to live in an eternal now. The daily political battles and social media outrages are forgotten only days later as we move on to the next big topic. We need to understand the past--which was not always pretty--more than ever but too many historians are writing for each other instead of for the public. History is too important to leave in the hands of academic bureaucrats hoping for tenure and the chattering class.

Simply put, history belongs to all of us and it’s up to us to share it, preserve it and, hopefully, learn from it. In my own small way, I was glad to be able to share some of my knowledge of Florida’s past and the people who shaped it during my years at Sunshine State News. I’m thankful to my editor and mentor Nancy Smith for her patience and support over the years and allowing me the freedom to dwell on Seminole War monuments and the signers of the Declaration of Independence imprisoned in St. Augustine. I’m grateful to my parents for nourishing my interest in history and to Congressman Bennett and my teachers at Wolfson, particularly Janet Coburn and the late Frances Brewster, for inspiring my love of Florida’s past. Most of all, I am thankful to my readers for their time and interest and for often sharing their own insights and stories on Florida’s history.

While Sunshine State News might be wrapping up, history continues to flow much like my beloved St. Johns River. Thanks for sharing this part of the journey with me and I hope to see you over at Florida Daily.

Kevin Derby can be reached at kevin.derby@floridadaily.com

Trading the futures market is

Permalink Submitted by Anonymous on May 27, 2020 - 1:25am
Trading the futures market is the best way to trade better than forex or stocks. To learn more just check the website Emini S&P Trading Secret.

Permalink Submitted by JamesTWhitt on May 2, 2020 - 4:45am
my buddy's friend makes $96 hourly on the internet. She has been with out artwork for five months however final month her charge emerge as $12747 really on foot on the internet for some hours. study greater on this net internet site.......HERE☛www.99kitty.com

OMG. I am crying right now,

Permalink Submitted by OfeliaWJefferson on April 21, 2020 - 11:50pm
OMG. I am crying right now, tears literally coming down my face. This is the worst news imaginable. I have no words to express how I feel about your leaving...you are the best of the best! It will never be the same for me or for your thousands of fans...NEVER. Best of luck, Nancy. What will we do without you? Who can we count on?..........www.money87.com

Permalink Submitted by hadariv3 on April 4, 2020 - 10:17am
My com-worker's sister-in-law makes USD/83 per Hour on the internet . She has been unemployed for six months but last month her income was USD/13726 just working on the internet for a few hours. have a check here.this link-!~!~!~!.GOOD LUCK ● HERE► Www.Works66.Com

For all of dads and moms that

Permalink Submitted by dgnidcuigp on April 4, 2020 - 1:43am
For all of dads and moms that love to stay home to take care of their loved ones,or rest of people on the search for an opportunity to pull in some extra income for their familymonth after month let me share a remarkable opportunity to explore...Thanks A lot Read more here>>> ☞☞☞☞ www.indeedmoney.com

Permalink Submitted by jkadfshjkf on March 29, 2020 - 6:37am
[ For USA ] ★My last month paycheck was for 11000 dollars… All i did was simple online work from comfort at home for 3-4 hours/day that I got from this agency I discovered over the internet and they paid me for it 95 bucks every hour...... Www.LifestylesReview.com

Permalink Submitted by rolem on March 29, 2020 - 12:38am
[ USA PEOPLE COME HERE ONLY ] For dads and moms who prefer to stay home to take care of their family, or rest of individuals hoping to find a way to earn some extra income in their free time on a regular basis here is a remarkable thing to explore...Thanks A lot Find out more here>> w­­w­­w­­.­­Bonanzu.comℬ The Word " ℬ " is not with web address.

Permalink Submitted by rolem on March 27, 2020 - 2:08am
[ USA PEOPLE COME HERE ONLY ] ●Earning money online is very easy nowdays. Eanrs every month online more than $17k by doing very easy home based job in part time. Last month i have made $19754 from this job just in my spare time which is only 2 hrs a day. Very easy work to do and earning from this are awesome. Everybody can get this right now and start earning cash online by follow instructions on this webpage............. Thanks A lot GOOD LUCK ↓↓↓↓ COPY THIS SITE ↓↓↓↓ ↠↠↠ w­­w­­w­­.­­Bonanzu.com℠ The Word "(℠)" is not with web address.

Permalink Submitted by Anonymous on March 15, 2020 - 6:41pm
[ USA PEOPLE ONLY ] By following this simple steps on this website, you can bring from $5000-$8000 of extra income every month... All you need is a computer and a internet connection and you are ready to start. Learn how to make a steady income for yourself on following web adress.for more info visit any tab this site Thanks a lot >>>>>>>w­­w­­w­­.­­WikiTrender.com

This is a great article and

Permalink Submitted by Jeff Crane on November 2, 2019 - 2:06pm
This is a great article and one I will print out and read occasionally. I am saddened to learn Sunshine State News will soon be gone. I always look forward to the emails linking the articles, but now they will be no more.

Permalink Submitted by LB on November 1, 2019 - 11:11am
Great article, Kevin. As you point out, our history too often is bulldozed over for yet another condo, ending up in a landfill somewhere. While development is inevitable it is important to protect Florida's heritage by recovering archaeological information before a site is destroyed. Fortunately, a number of local governments require testing for these non-renewable resources. Good on them. Archaeological material recovered on Florida's state lands are meticulously cataloged for retrieval by researchers and routinely loaned out to numerous museums throughout Florida for the enjoyment of the public. These collections were previously housed in an old Publix then bounced to a small building on state land. But space is running critically low. Fortunately, Florida's new Secretary of State, Laurel M. Lee, has had the foresight to request Florida's legislature to construct a modern building that can adequately house, preserve and exhibit these important collections for years to come. Floridians who are proud of our rich heritage should contact their legislator's in support of Ms. Lee's request!