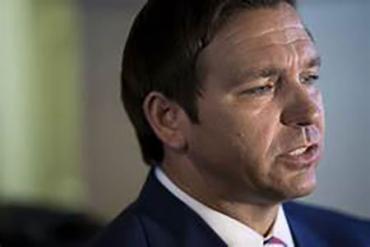 Gov. Ron DeSantis on Monday questioned a proposal to increase Florida’s minimum wage through the constitutional amendment process, warning about effects on the restaurant industry.

DeSantis focused on the minimum wage proposal as he railed against policy-oriented constitutional amendments that he said put “handcuffs” on future legislation, as he opened an Associated Industries of Florida conference at the Augustus B. Turnbull III Florida State Conference Center in Tallahassee.

DeSantis, speaking in a closed-door meeting that his office streamed live on Facebook, pointed to part of the proposed minimum-wage amendment that would increase the amount of wages that restaurants would have to cover for tipped employees. He said it is “going to cause big, big upheavals for the restaurant industry. It just will.”

“When you put that in the Constitution, we can’t just go back and say, ‘Oh, let’s tweak it, let’s do that,’ ” DeSantis continued. “You literally would have to go back and do another constitutional amendment.”

DeSantis has been a critic of the amendment process, which he argued Monday is a “cottage industry” for consultants and a “game” for the wealthy.

“If you’re going to amend the Constitution it should be provisions similar to what we’ve seen with the federal Constitution,” DeSantis said. “Term limits, which we have. Two-thirds (legislative majority) to raise taxes. Structural changes or things where you are protecting individual rights.”

Orlando attorney John Morgan, who chairs and has largely bankrolled the political committee Florida For A Fair Wage, strongly disagreed with DeSantis’ assessment of the process. Morgan’s committee was on the verge Monday of submitting enough petition signatures to the state to get the minimum-wage measure on the November 2020 ballot, though it also needs the Florida Supreme Court to sign off on the proposal’s wording.

“Had voters not weighed in (by passing a constitutional amendment) we would not have medical marijuana. The pharmaceutical industry would have ensured that. Felons would not have the right to vote,” Morgan said in an email. “He (DeSantis) has a chance to have a fair minimum wage enacted in the next session. If it was fair, maybe I could agree. If it is eyewash I will know. If it is fair, I will drop my initiative.”

“This is not a game to me. It is a matter of morality and dignity,” Morgan said. “Our democracy gives power to the people. Special interests don’t like that. Tell the governor to tell me what he would propose. So far it is zero. He is a very smart guy. Show us something real.”

The state’s minimum wage this year is $8.46 an hour, with tipped employees at $5.44 an hour. Restaurants receive what is known as a “tip credit” for the difference, which would remain at $3.02 an hour under the constitutional amendment. That would have the effect of gradually increasing the amount restaurants have to pay in wages.

“The restaurant industry is the industry that most often violates the wage laws,” Morgan said in his email. “Sixty percent of restaurants fail in the first year. Eighty percent fail in four years. It is a bad business that can only work by cheating employees and paying slave wages, usually.”

Florida For A Fair Wage had submitted 766,058 valid signatures as of early Monday afternoon, according to the state Division of Elections website. It needs to submit 766,200 valid signatures by a February deadline to be eligible for the ballot.

Another proposal that could go on the November 2020 ballot, meanwhile, would make it harder to amend the Constitution in the future. That proposal would require voters to support constitutional amendments twice --- rather than once --- for them to take effect.

DeSantis noted that Illinois, where he traveled in August to pitch Florida to financial-sector companies, is struggling financially, in part, because of pension requirements that have been in that state’s Constitution since the 1970s.

“We can do good policy at the state level, but if the Constitution is being changed in ways that are going to create roadblocks for reform or prevent us from dealing with problems in the future, that’s something that is a cause for concern,” DeSantis said.

In June, DeSantis signed a controversial measure expected to make it harder for citizens’ initiatives to reach the ballot. The law, in part, requires petition gatherers to register with the secretary of state and to be paid hourly, rather than based on the number of petitions collected.

“We’ll see how this new law shakes out, and we’ll see if there is anything more that we can do going forward,” DeSantis said Monday.

It’s not only the restaurant

Permalink Submitted by Anonymous on November 3, 2019 - 8:13am
It’s not only the restaurant business that would be affected, childcare centers, grocery stores, even admin positions. This will all result in the cost of everything we buy or services that we use will increase to afford this wage increase. We will all be in the same situation as before the wage was increased. I don’t understand how that is difficult to understand. Look at the costs of living in areas who have increased minimum wages.

Absolutely agree with you

Permalink Submitted by voncile on November 7, 2019 - 8:46pm
Absolutely agree with you Anonymous. The sheer blindness of some people continues to amaze me. Hopefully Gov. DeSantis will squelch this idiotic idea.

If as you say it should be

Permalink Submitted by AR on November 2, 2019 - 11:14am
If as you say it should be $100 an hour how much would rent, gas, child care, and food go up? The apartment complex would have to pay maintenance, management, and security all $100 per hour so rent would increase. The store attendant at the gas station the same so the cost of gas, a loaf of bread, milk etc...... goes up. Groceries would skyrocket because cashiers baggers, stock personnel, management all get $100 per hour. People on social security would need to get an increase equivalent to $100 per hour otherwise they would die because they wouldn't be able to afford to eat, pay for meds etc.... How much of the $100 per hour would then go to pay for social security? Mom and Pop restaurants would shut down. Small businesses would cease to operate. Your car parts, oil changes, labor on repairs all would go up. So the $100 per hour isn't going to stretch as far as you think and your income taxes will go up because you will be in a higher tax bracket. If minimum wage is increased to $15 an hour it's the same outcome where everything will increase and hours will be cut. Employees currently getting enough hours for medical benefits would lose hours and therefore lose benefits. Things in paper sound good but reality is often different.

Correction in reference if it

Permalink Submitted by AR on November 2, 2019 - 11:19am
Correction in reference if it's increased to $15 per hour ........the same outcome on a smaller scale where everything will increase and hours will be cut.

Permalink Submitted by Anonymous on October 29, 2019 - 11:24am
As it is, W-A-Y too many restaurants in most areas of this state. And, they come and go like the Love Bugs. Separate the wheat from the chaff - and let 'em either pay a living wage or go out of business. We sue as hell don't need the number of pizza joints and taco stands and junky restaurants that are out there now. Only the good ones should survive - and they should survive by paying a living wage.

Anonymous, something tells me

Permalink Submitted by voncile on November 7, 2019 - 8:50pm
Anonymous, something tells me you slept through Economics class in 9th grade.

So basically raise the price

Permalink Submitted by SoFineSoFla on November 1, 2019 - 3:44pm
So basically raise the price of starting a local business. That way with reduced competition established businesses don’t have to compete as aggressively as they do resulting in less consumer choices, poorer service, longer wait times. Sounds like eating out in southern California.

Permalink Submitted by voncile on November 7, 2019 - 8:52pm
Excellent reply SoFineSoFla. This site needs a 'like' option.

The result is that you'd then

Permalink Submitted by Anonymous on October 29, 2019 - 4:12pm
The result is that you'd then have to pass a new amendment to bump up unemployment benefits to the equivalent of $15 per hour because that's where most of these people will be getting their paycheck.

The $15 minimum wage will

Permalink Submitted by Anonymous on October 29, 2019 - 4:07pm
It should be $100 per hour or much more. That way everybody can live comfortably.