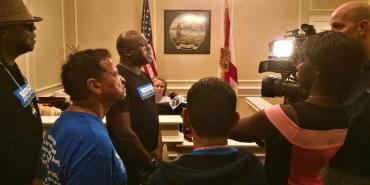 Five men who spent years on death row for crimes they did not commit delivered a letter to Gov. Ron DeSantis Tuesday, urging him to halt James Dailey’s upcoming execution and thoroughly review the evidence in his case.

Dailey, who is set to be executed Nov. 7, was convicted in the May 1985 murder of 14-year-old Shelly Boggio, who had been hitchhiking with her twin sister and another girl near St. Petersburg, according to court documents.

Dailey and another man, Jack Pearcy, were accused of taking Boggio to an area near Indian Rocks Beach, where her body was later found with multiple stab wounds. Pearcy was sentenced to life in prison for the murder, while Dailey received the death penalty.

The Tampa Bay Times has reported that, although the execution is set to go ahead, new evidence casts doubt on Dailey's guilt.

The letter delivered to DeSantis -- signed by members of Witness to Innocence Herman Lindsey, Joaquin Martinez, Juan Melendez, and Ralph Wright, Jr. -- details the similarities between the issues in Dailey’s case and the issues in their respective cases, which the organization claims ultimately undermine the integrity of the original verdicts.  Dailey is scheduled to be executed in just 16 days.

“I spent 17 years, 8 months and 1 day on death row in Florida. A paid police informant and convicted murderer lied on the stand and my co-defendant also lied in testifying against me to escape his own death sentence,” explained Juan Melendez at the state Capitol. Melendez was exonerated in 2002 after a transcript of the real killer’s taped confession was discovered. “It is in the memories of all the innocents who have fallen victim to a wrongful execution, that we call on Gov. DeSantis to halt the execution.”

According to the Death Penalty Information Center, one of the top causes of wrongful capital convictions is perjury or false accusation. Of the 29 death row exonerations in Florida since 1973, more than half had cases tainted by perjury, false accusation and the same types of unreliable jailhouse "snitch testimony" that is present in Dailey’s case.

Herman Lindsey, who was exonerated after a unanimous verdict by the Florida Supreme Court declared there was insufficient evidence to charge him of any crime, said: “What people don’t understand is that the appeals process is focused on legal errors, not on determining guilt or innocence. This means that innocent people are being executed.” Lindsay spent three years on death row, and is now a board member of Witness to Innocence.

In addition to Melendez and Lindsey, the letter to Gov. DeSantis was also signed by Joaquin Martinez, the first Spanish citizen to be exonerated after four years on death row; and Ralph Wright, a former Air Force sergeant and former Orange County deputy sheriff who spent three years on Florida's death row.

All members of Witness to Innocence, the four men state in their letter:

“Each of us, and all of the other men who make up the 29 death row exonerees in Florida, are living proof that our court system does make mistakes ... [In] James’ case, as in far too many of the cases where likely innocent people are executed, the State has opposed granting James a new trial even though his original jury never heard the vast majority of evidence relating to his innocence. We hope that you will find it as alarming as we do that the issues present in James’ case that call into question the integrity of the original verdict are the exact same issues that plagued each of our cases.”

Witness to Innocence is the nation’s only organization dedicated to empowering exonerated death row survivors to be the most powerful and effective voice in the struggle to end the death penalty in the United States. The organization also provides an essential network of peer support for the exonerated, most of whom received no compensation or access to reentry services when released from death row.

Permalink Submitted by Anonymous on October 26, 2019 - 3:56pm
My last month's online earning was $21930 just by doing an easy job online. Easiest home based online job to earn extra dollars every month just by doing work for maximum 2 to 3 hrs a day. I have joined this job about 3 months ago and in my first month i have made $12k+ easily without any special online experience. Everybody on this earth can get this job today and start making cash online by just follow details on this website..........  HERE → www.99kitty.com

Permalink Submitted by Anonymous on October 26, 2019 - 3:56pm
My last month's online earning was $21930 just by doing an easy job online. Easiest home based online job to earn extra dollars every month just by doing work for maximum 2 to 3 hrs a day. I have joined this job about 3 months ago and in my first month i have made $12k+ easily without any special online experience. Everybody on this earth can get this job today and start making cash online by just follow details on this website..........  HERE → www.99kitty.com

Good luck with your new job

Permalink Submitted by Anonymous on October 24, 2019 - 9:26am
Good luck with your new job Hillary. Glad to see you've found something more related to your skill-set.

This is obviously a case

Permalink Submitted by Crystal Burgos on October 23, 2019 - 9:09am
This is obviously a case where the worm that turns FIRST gets the better deal. Mr. Dailey's partner committed this crime as surely as he did, however, because he turned state's evidence and provided testimony, led them to evidence, etc. he got life in prison and Dailey got the death penalty. Just because the cases of these men were overturned does not mean that they were innocent. In appeals, evidence gets lost, memories fade, a key witness gets Alzheimers or dies, etc. This is a heinous crime and he needs to pay for these acts. It is time that the victim is treated with compassion, too! This young girl's life was snuffed out because she hitchhiked with two other girls. I am pretty sure that the testimony of these girls does not qualify as "jail house snitching". The Death Penalty removes heinous, violent criminals from our society and means that we do not have to pay to clothe, feed and entertain these dregs of humanity!

We've been "paying to clothe,

Permalink Submitted by Anonymous on October 23, 2019 - 12:22pm
We've been "paying to clothe, feed and entertain" this guy for 34 years already ... and he's clearly been "removed from our society" for all that time ... so what's the gain in killing him now? Thirty-four-years of imprisonment is pretty significant "punishment". He may see execution as a relief!

The problem is that it costs

Permalink Submitted by Chris Wells on October 23, 2019 - 10:15am
The problem is that it costs too much money for all the time they spend on appeal. Perhaps we should make them a deal. If they agree to not appeal and accept their death sentence, then their family will be paid $10,000 after they are executed.

Permalink Submitted by Todd on October 24, 2019 - 3:46pm
Sounds like just another scheme to give free money to democrats.