Rick Scott Calls Out NBA for Ties to Communist China 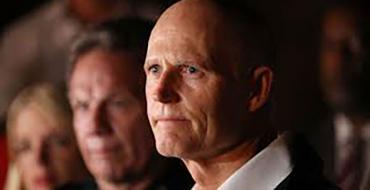 U.S. Sen. Rick Scott, R-Fla., is calling out the National Basketball Association (NBA) in the aftermath of a Tweet about China.

At the end of last week,  Daryl Morey, the general manager of the Houston Rockets, one of the most popular NBA teams in China thanks to the franchise drafting Yao Ming with the first pick of the 2002 draft, posted on Twitter, praising the protesters in Hong Kong who are opposed to the Chinese regime.  Under fire from China, Morey deleted the Tweet.

While some have accused the NBA of pressuring Morey, speaking in Japan on Monday, NBA Commissioner Adam Silver insisted that wasn’t the case.

“There is no doubt, the economic impact is already clear,” Silver said according to the Japan Times. “There have already been fairly dramatic consequences from that tweet, and I have read some of the media suggesting that we are not supporting Daryl Morey, but in fact we have.”

“I think as a values-based organization that I want to make it clear … that Daryl Morey is supported in terms of his ability to exercise his freedom of expression,” Silver added.

That wasn’t enough for Scott who has increasingly taken aim at China in recent weeks. Scott called for a meeting with Silver on Monday.

“I am requesting a meeting with Commissioner Silver immediately to discuss the NBA’s involvement in Communist China,” Scott said. “I was the first U.S. senator to travel to Hong Kong since the protests began. What I saw was devastating. Men and women are risking their lives to fight for the same freedom we take advantage of in this country. As Americans, it is our duty to stand together against injustice, and that means standing up to Communist China and President Xi as he violates the rights guaranteed under the 1997 handover of Hong Kong.

“We must all put human rights above profit. And that means standing with Hong Kong. The NBA’s refusal to denounce Communist China for what it is – our adversary – is shameful. The NBA should stop playing games in Communist China, and I look forward to meeting with Commissioner Silver to discuss the importance of supporting the brave individuals fighting to free themselves from the grip of Communist China,” Scott said.

He should call out the DNC

Permalink Submitted by Sarah Strong on October 10, 2019 - 1:37pm
He should call out the DNC for ties to Communist ideology.

Okay, so Scott is mad at the

Permalink Submitted by Jeff Carry on October 8, 2019 - 1:44pm
Okay, so Scott is mad at the NBA. He didn't seem to mind when he was Gov. Scott and went out of his way to help the Magic and the Heat. He supported the new NBA arena's construction for Orlando and Miami as well as courting the league in hopes of landing the NBA All-Star Game. The Human Rights violations of the Chinese is worth talking about but no one talks about the UAE and Qatar where the NBA, PGA, and just about every other sports in the world go without a simple word. Looks like a big-time publicity grab....

Permalink Submitted by Anonymous on October 8, 2019 - 11:45am
Doesn't the "N" in "NBA" stand for "National"??? It's just money-grubbing to be marketing the NBA in China in the first place! I thought Trump was all about "America First"???

Permalink Submitted by Anonymous on October 8, 2019 - 11:42am
Who's weirder-looking. Scott or Silver?

How smart can Daryl Morey be,

Permalink Submitted by Anonymous on October 8, 2019 - 10:00am
How smart can Daryl Morey be,..REALLY?!? (One should never dedicate where one eats).

Daryl must be the "Rockets"

Why not stand for the people

Permalink Submitted by j dee on October 8, 2019 - 8:05am
Why not stand for the people in your own backyard first?