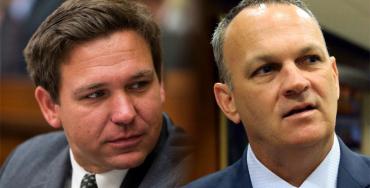 This week, Florida Education Commissioner Richard Corcoran announced the latest stops in his Florida Standards Listening Tour, which will start in the coming days, giving the public another chance to weigh in on what should replace Common Core in the Sunshine State.

When Gov. Ron DeSantis issued an executive order at the start of the year to eliminate Common Core in Florida, he also called on Corcoran to review and revise the standard by January 2020.

“The revised draft was crafted based on feedback the Department of Education received over the last several months from Florida teacher experts, national experts and the education community,” the Education Department noted this week. “In addition to the listening tour, the public can submit feedback on each of the second draft standards individually at floridastandardsreview.org or email at standardsreview@fldoe.org.”

In the meantime, Corcoran has been working with stakeholders and the public, looking at almost 75,000 reviewed by the public.

“Our team has been working tirelessly on the revised draft, and we truly appreciate all of the input we have received from Floridians thus far,” said Corcoran. “Success is our standard and we are looking forward to hosting the upcoming listening tour to ensure that Florida has the best academic standards in the nation.”

In the meantime, Corcoran is ready to hit the road to take part in another round of gathering input including the following scheduled appearances:

Permalink Submitted by Anonymous on May 11, 2020 - 4:00am
Google the website Emini S&P Trading Secret, if you’re finding a fellow who can show you how to earn in trading, these guys are great they take seriously teaching people and I’m very happy to recommend them to anyone who are interested in learning to trade for themselves.

As commissioner of education

Permalink Submitted by Betty Sailes on October 7, 2019 - 6:28pm
As commissioner of education he suppose to visit all county’s. Something not right with this picture. Why? not Manatee County.

I do not see the two largest

Permalink Submitted by Natalia Garceau on October 7, 2019 - 5:37pm
I do not see the two largest counties - Miami Dade and Broward - on the list. I called FLDOE for more information, but the communication department staff do not have any additional info. Who created the schedule? When can Dade and Broward educators expect Mr. Corcoran’s team to arrive to gather our input?

Permalink Submitted by NoMoreRepublicans! on October 7, 2019 - 11:42am
Yeah, the Republican party hack leading this state's 40th ranked (among the U.S. states) public education system with the 48th ranked public school teachers' pay scale is REALLY going to do something to improve public education ??? The Republicans have been in charge of here for the last 22 years - and the only direction education has gone in during that time is - D-O-W-N!

I think that it is a great

Permalink Submitted by Joseph Cofield on October 7, 2019 - 8:23am
I think that it is a great idea that Florida Education Commissioner Richard Corcoran is visiting across Florida to get the opinions from the citizens of Florida. I toured the entire State of Florida in 2015, visited each of the 67 counties, spoke with each of the 67 school districts (Superintendents/Assistant Superintendents/School Officials), in addition, I took the time in my journey across Florida to speak to the citizens in each of the 67 counties. I gathered from my research that our citizens wanted our youth to expand their knowledge of the United States Constitution and equally important they wanted to have the Civics Education signed into law "HB 105 Civics Education" by Governor Charlie Crist in 2007 and endorsed by many such as Senator Bob Graham. I, Joseph Cofield, have done my part from the results that I found from my research. I not only traveled and listened I made a commitment to get copies of the United States Constitution Booklets to the entire 67 counties/school districts across Florida. When you read the directive that Governor Ron DeSantis gave to the Commissioner of Education, the Governor stated in Executive Order Number 19-32 in section 1000.03, F.S. "the Florida's Education system should ensure that "students are prepared to become civically engage and knowledgeable adults who make positive contributions to the communities." My point is simple I believe that Commissioner Corcoran will take his finding from the "Listening Tour" and he will make a difference. How do I know? I was so motivated to make a difference that I not only felt it was necessary for Southwest Florida to have their students with copies of the United States Constitution (I do not stop until this was accomplished) but the entire State of Florida and as a results those middle school studies are starting to reach the levels that Governor DeSantis expects to achieve and of course what our leaders were hoping would happen since 2007 when everyone accepted the challenge to "Provide a roadmap to make Florida's standards number one in the nation." I believe that when Commissioner Corcoran visits the counties he will find as I have learned that the citizens want the best for our youth. I know because I spent my own funds to find out and I did not stop until I created a 501(c)(3) Non-profit Organization (Constitution For The People) - www.ConstitutionProject.us - to help me achieve the finding that I learned from the citizens during my journey across Florida. I firmly believe that this Florida Education Commission will put some teeth in his findings and will provide positive results of his finding because he is going to learn first hand what the citizens across Florida really wants to do in order that our youth receive the best that we can provide.

How about Nassau County?

How bout requiring all

Permalink Submitted by Ocean Joe on October 5, 2019 - 3:06pm
How bout requiring all charter schools (like the one your wife owns) meet and abide by the same testing standards now required in the public schools?

How about a meeting in Panama

Permalink Submitted by Karen Schoen on October 5, 2019 - 11:22am
How about a meeting in Panama City? People in Holmes, Jackson and Washington Co would like to have input also.

There's a meeting in Walton

Permalink Submitted by Mike on October 7, 2019 - 5:50pm
There's a meeting in Walton County, so not sure what you mean?

Parents in the Escambia and

Permalink Submitted by Dave on October 5, 2019 - 9:47am
Parents in the Escambia and Santa Rosa area would welcome the opportunity for input if they didn't have to drive 2 hours over and 2 hours back for a 5:30 to 6:30 pm meeting.

Did you see one of the

Permalink Submitted by Mike on October 7, 2019 - 5:28pm
Did you see one of the meetings is in Walton County?