Francis Rooney: No Federal Bailouts of State and Local Governments 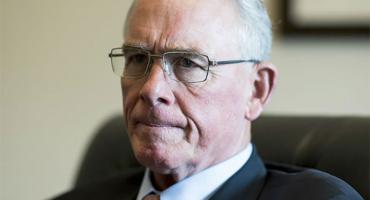 A Southwest Florida congressman is behind a proposal to ensure federal dollars won’t be used to bailout insolvent states, territories and local governments.

At the end of last week, U.S. Rep. Francis Rooney, R-Fla, introduced the “Government Bailout Prevention Act” which he showcased on Tuesday.

“American taxpayers do not like when their money is used to bail out failing corporations or businesses and this dislike extends to state and local governments who are fiscally irresponsible,” Rooney said. “I have consistently voted against irresponsible spending and subsidies. All levels of government; federal, state, and local, must be better stewards of taxpayer money. While I continue to fight for fiscal responsibility in Congress, I believe that state and local governments should not be bailed out for their fiscal mismanagement. It is time for accountability and honesty.”

According to Rooney’s office, the proposal “prevents the federal government, including the Federal Reserve and U.S. Treasury, from paying or guaranteeing state and local obligations if that government entity has defaulted, filed for bankruptcy, or is at risk of bankruptcy or default.”

Rooney’s bill was sent to the U.S. House Oversight and Reform and the Financial Services Committees on Friday. So far, he has not reeled in any cosponsors.

“Unfortunately, a number of state and local governments continue to spend more money than they bring in and are racking up dangerous levels of debt,” said Young.“It is unfair for Hoosiers to be expected to pay taxes to bail out this fiscal irresponsibility. These governments need to be on notice that they can’t continue down their fiscally risky path and expect federal taxpayers to pick up the check.”

“The taxpayer should not bail out failing industries, businesses, or banks,” said Toomey.“The same applies to state and local governments that overspend and mismanage their budgets into bankruptcy. Now some in Washington are pushing for the Federal Reserve and other federal agencies to spend billions to clean up these mistakes -- which is unfair. This legislation protects American taxpayers by ensuring their dollars aren’t used to bail out state and local governments.”

“The reckless, debt-fueled spending of a few state and local governments can’t go on forever, so it won’t,” said Cotton.“Our bill would ensure American taxpayers aren’t stuck with the tab for the spending binges of a few irresponsible politicians.”

The bill has not seen much momentum in the Senate in the two and a half months since Young introduced it. It has been before the U.S. Senate Banking, Housing, and Urban Affairs Committee all that time. Outside Toomey and Cotton, no other senators have signed on as cosponsors.

I'm glad to hear that Rooney

Permalink Submitted by The Swampfox on October 20, 2019 - 10:41am
I'm glad to hear that Rooney won't be running another term. A RINO is not needed in DC especially from Fla. Too many RINO's in the GOP in SWFLA, especially in the Naples and Ft. Myers area.

Permalink Submitted by Tom S on October 5, 2019 - 5:53pm
I'm torn on this. I'm a democrat. If a municipality is overspending, why don't the citizen of that city get taxed more. Here in Massachusetts we have proposition 2.5. Every city and town is allowed a 2.5% increase, if the city/town needs more they have to go to the citizens of that city and have a vote as to whether their taxes go up to pay for the increase. If the increase fails, the city needs to do without. It seems to work. In my city, the increase in taxes is called an override vote and it has passed half the time. as far as who is the better manager of money I would absolutely disagree with the commenter who beleieves republicans are better at managing money...I don't think so. trump is a tax and spender....he gave back to his 1%er friends and we will be shortly paying for it. Obama had to clean up Bush's fiscal mess and Clinton was the last president to balance the budget. Facts are tough.

I agree with NO bailouts!

Permalink Submitted by Ruth Kern on October 5, 2019 - 5:10am
I agree with NO bailouts! People are fleeing Illinois and other high tax states because all the Democrats, who are in charge of these states, know how to do is tax, tax, tax the people. There are other states in our Union who welcome people from Illinois and other high tax states - Florida, North Carolina, etc. We are SO happy we sold our home in Illinois and got out of there while 'the gettin' was good'!

As for bail outs of big

Permalink Submitted by Ocean Joe on October 2, 2019 - 9:33pm
As for bail outs of big business, saving GM and the beloved Chevrolet so many Republicans like to drive was a good idea because failing to do so during the great recession would have led to even greater unemployment, cascading failure of suppliers, not to mention all the mom and pop businesses in the towns surrounding the plants. GM ultimately repaid its debt. Democrats made that bail out possible, while Mitt Romney, venture capitalist and GOP nominee said 'let them fail.' If you want a Chevrolet you can still buy a new one. Romney does have a point about Trump, though.

How about "No bailouts for

Permalink Submitted by Anonymous on October 2, 2019 - 11:05am
How about "No bailouts for giant corporations" ??? Big Business has been getting away with murder while the working middle class has been skewered! This is just more Republican pandering to business and dumping on the people!

This is an excellent idea,

Permalink Submitted by Rena Goldman on October 2, 2019 - 8:54am
This is an excellent idea, but I'm going to guess that the democRATs in the House will not let this go forward because they want the rest of the country to bail out irresponsible leftist cities and states.

You're wrong, What we really

Permalink Submitted by Anonymous on October 2, 2019 - 11:04am
You're wrong, What we really want is no bail-outs of the so-called 'too big to fail' corporations.

We want, and need, that also.

Permalink Submitted by Rena Goldman on October 2, 2019 - 12:34pm
We want, and need, that also. However, critical infrastructure corporations that are "too big to fail" need to be split up so that they can't damage the economy so bad if (and when) they fail - unless they are willing to maintain a sufficiently large cash escrow account as insurance against failure.

Thank you sir!!! Why should

Permalink Submitted by Al F on October 2, 2019 - 8:32am
Thank you sir!!! Why should we be required to pay for the indiscretions of others. If they can't manage their city, county or state.... resign.