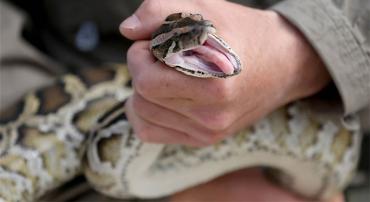 The program that has already eliminated more than 2,500 invasive pythons from Florida's Everglades is about to double down on its success.

With Gov. Ron DeSantis' encouragement and Thursday's vote by the South Florida Water Management District (SFWMD) Governing Board, the Python Elimination Program has been expanded.

"This is for all of us who love the Everglades. We're putting our money where our mouth is and taking the fight to these invasive pythons, now in a bigger way and across much more habitat," said SFWMD Governing Board Chairman Chauncey Goss. "Gov. DeSantis loves the Everglades and directed us to leave no stone unturned to eradicate this predator that threatens native Everglades species. That is exactly what we're going to do with our partners at FWC and Everglades National Park."

The Governing Board voted to double the number of hunters in its Python Elimination Program, first started in March 2017. It has in that time removed more than 2,540 snakes. The Governing Board also voted to triple the funding for this critical program.

The program pays trained python contractors an hourly wage and a bounty based on the size of snakes to find and remove Burmese pythons from the Everglades. Burmese pythons are an invasive predator not native to South Florida that have become a severe threat to the state's native ecosystems. Pythons prey heavily on Florida wildlife, like rabbits and birds, and directly compete for food with native predators such as bobcats and Florida panthers. The 2,500th snake eliminated by the program was caught just recently by Michael Kimmel.

The Governing Board also authorized SFWMD Executive Director Drew Bartlett to enter into an agreement with federal agencies and other state agencies such as the Florida Fish and Wildlife Conservation Commission (FWC) that will allow District python hunters to access more state and federal lands in South Florida to hunt pythons. At Thursday's meeting, Florida Fish and Wildlife Conservation Commission (FWC) Executive Director Eric Sutton and Everglades National Park Deputy Superintendent Justin Unger joined SFWMD Land Resources Bureau Chief Rory Feeney in highlighting how the agencies are going to work more closely together on python removal. FWC also has a python program that has removed 839 snakes.

"This is not individual agencies or entities with individual programs to remove pythons. This is one program with a diversified portfolio of assets and stakeholders to accomplish one mission, " said Sutton.

The Governing Board also authorized the District to contract with the University of Florida to perform scientific work to aid the python removal effort. The work would potentially include reptile monitoring and assessments of the impact of removal efforts on the python population.

Gov. DeSantis last month directed SFWMD to work with other state agencies to expand its program to better combat the threat posed by Burmese pythons. The District has committed to implementing a number of steps to follow DeSantis' directive and expand the program. Additional efforts include increasing the number of professional contracted hunters; working with FWC to host a joint Annual Python Challenge event to hunt the snakes; developing agreements with local governments for hunters to access lands they own in order to hunt snakes; and, using other promising methods and tried-and-true methods such as trained dogs to hunt pythons.

Why aren't they called

Permalink Submitted by Seth Sklarey on September 14, 2019 - 9:06am
Why aren't they called Myanmar pythons?

Collect 'em and send 'em to

Or check to see if they're

Another use for the Instant

Permalink Submitted by Annette Roy on September 13, 2019 - 9:02am
Another use for the Instant Pot!