Donald Trump insists "Alabama" was right ... and it was

It would be laughable were there not rampant devastation just off our shores, but the press is content to hammer away at President Trump over his supposed gaffe involving Hurricane Dorian and the state of Alabama. While the storm has moved on, the press has not. And all kinds of left-leaning reporters insist on beating the tortured horse that Trump made a most egregious error on hurricane notification.

What has these blowhards in a spin cycle to this day occurred Sept. 1 in a national address. The president showed a forecast map of possible impacts by Dorian, and he dared to take out a pen and extend the cone of probability to include portions of Alabama. Members of the media saw this and have been bleating about it day after day ever since.

Their outrage is about as accurate as a rainfall forecast six months from now.

At MSNBC they were still trying to ignite the wet fuse of this controversy, becoming stammering talking heads when conservative writer Rachel Bovard did the unthinkable and delivered facts. Over at CNN they've been especially dogged on this story, all while missing the point, contradicting their own on-air comments, and exhibiting an even worse grasp of geography that what they accuse the president of.

As the media developed this into a major story that was all cloudy haze and no landfall, it came to affect the National Oceanic and Atmospheric Administration. Contradictory statements have been made by officials regarding the Trump Sharpie forecast. It was soon after the president’s presser that Sunday when forecasters at an Alabama field office of the National Weather Service contradicted him and said the storm posed no threat. Then the NOAA headquarters spoke out against members of that Alabama location.

The press jumped in and declared that NOAA "was being bent" to make the president look good for political reasons. CNN has gone so far as to declare that the president failed a basic geography test regarding this forecast, a claim that is not only ridiculous but it makes the network’s own reporting look all the worse.

For starters, the president really managed to get network heads in a lather when he tweeted out some video that showed CNN on-air weather experts noting that Alabama was in fact targeted by the storm. This was compounded by members of CNN claiming they had never mentioned Alabama as a target. Then there was the small matter of this same network -- which claimed the president was a failure at geography -- completely showing ignorance of geography by mislabeling the very state in question on a map. 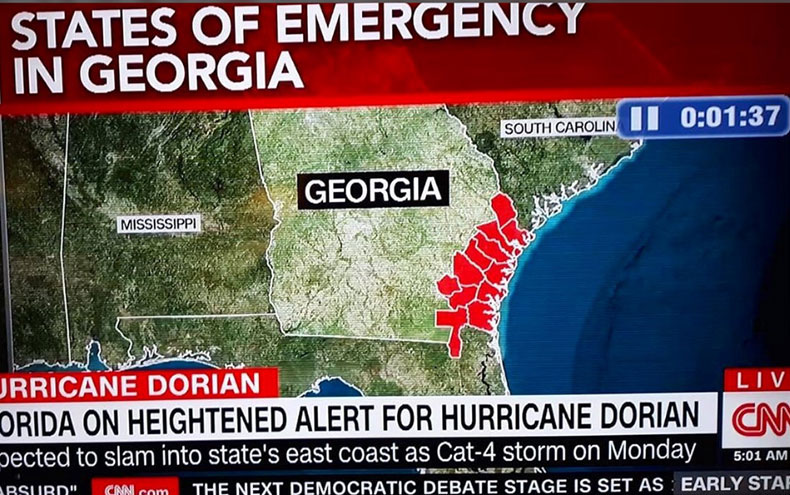 To see the level of desperation CNN has gone to to preserve its narrative on this matter, we need only look to the presentations from its self-styled media expert, Brian Stelter. ”This past week wasn't Sharpie-gate,” corrected the media guru, “it was ‘lying about a hurricane-gate’.” Stelter went on to state this was the biggest “lie” of Trump’s term to date. A rather bold pronouncement, considering his own network’s insistence for over two years he had been lying about Russian collusion.

OK, so this instance of drawing an arc on a hurricane map is the biggest lie told, Brian? Here are two details that will shatter your claim like a house-of-cards in a Cat 2 storm. Stelter has offered up this projection map as “proof” of Donald Trump’s lie: 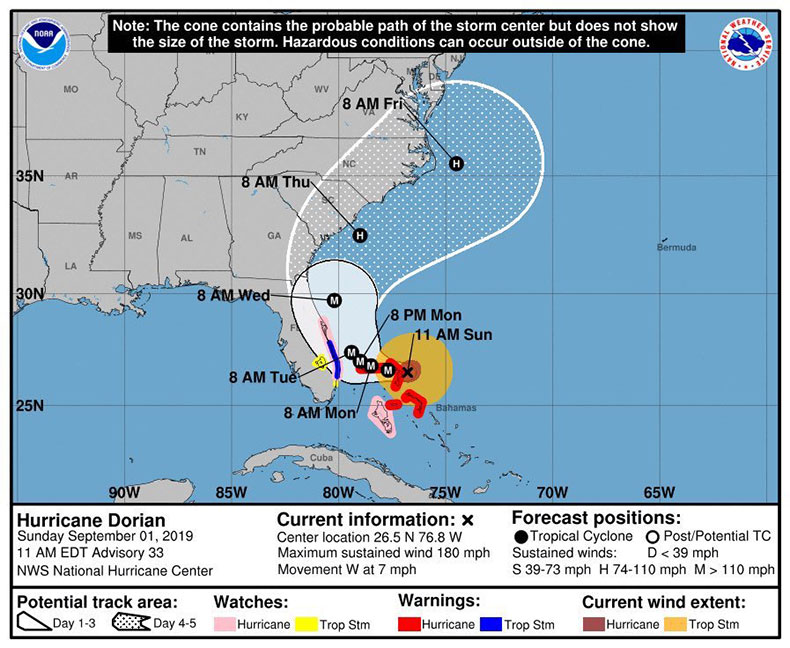 That is a projected path of the storm CENTER. However another map showing the areas possibly affected by storm winds and weather has a much wider field, showing areas as far south as the Florida Keys, and as far north as ... Alabama. 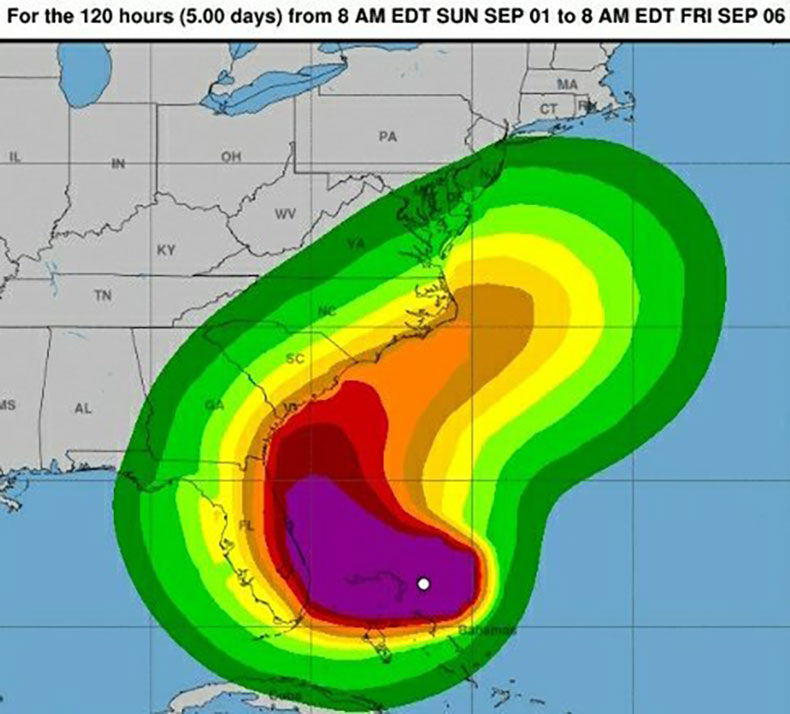 Now, this is where all the facts come to rest and show where the lies abide. That second map was provided by NOAA. So when the president included Alabama in his Sharpie ad-lib, he had in fact been accurate. Provided is a tweet from NOAA, which includes both maps, and the importance here is the date -- Sept. 1, the date and time of the president’s presser. 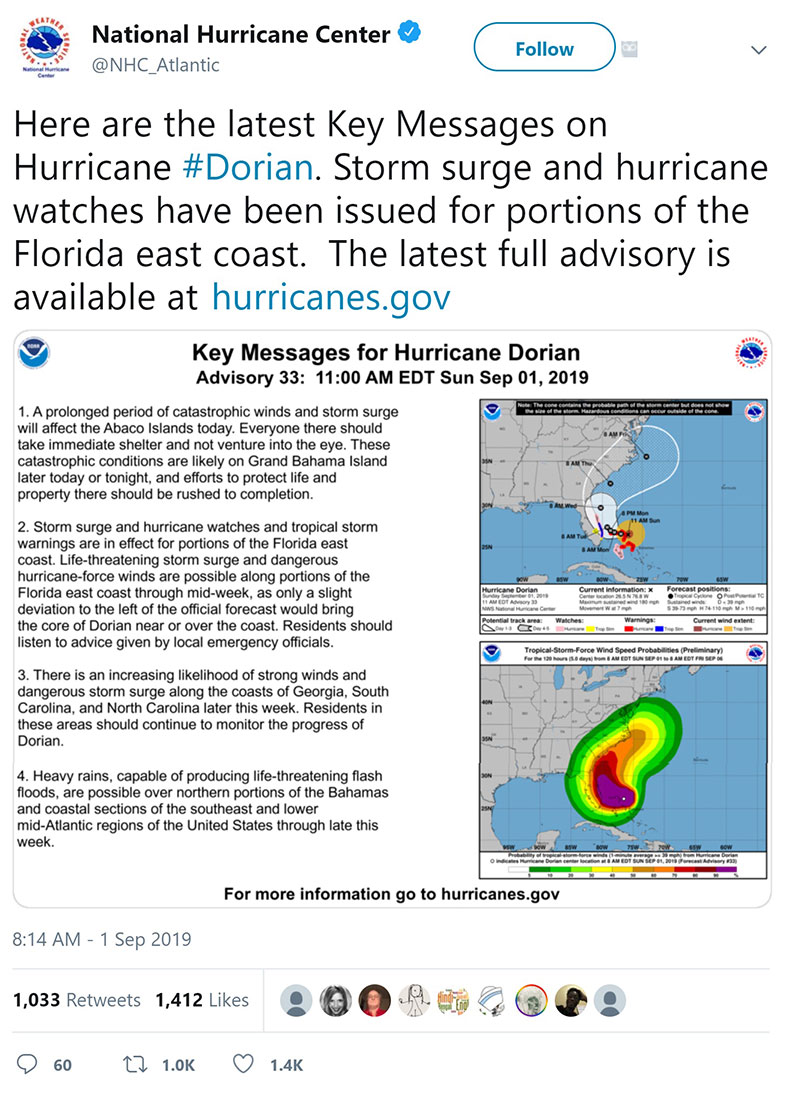 Note as well that this means Brian Stelter selectively chose the upper map provided by NOAA, and excluded the lower map, in his explanation. This means it was he who lied in his description of supposedly proving the President’s error. The irony in all of this is how upset CNN personalities get whenever Trump states their network fabricates news.

Thank you President Trump for

Permalink Submitted by Marta Richardson on September 11, 2019 - 10:13am
Thank you President Trump for doing the job that we hired you for. Please keep fighting for us, and keep fighting against the fascist Democrat party.

Your "we hired you" certainly

Permalink Submitted by DumptTrump2020 on September 11, 2019 - 11:26am
Your "we hired you" certainly does NOT refer to ALL of "us". Trump was elected on the basis of an anachronistic technicality by 63 million people who voted for him - while 66 million of "us" voted for his opposition. Therefore, the MAJORITY of "us" did NOT elect Trump. And, of course, if you check your Funk and Wagnalls, you'll see that today's U.S. government and the Republican party are most clearly representative of fascism, i.e., a dictatorial combination of extreme nationalism and authoritarianism, than is the much more inclusive and democratic Democratic party.

You (and Hillary) lose!

Permalink Submitted by Lonnie on September 11, 2019 - 9:08am
The NOAA model Sunshine displays showed a zero to 10 percent chance of 39 mile an hour winds intruding maybe twenty miles onto a small corner of Alabama. This is not "hit hard." Why can't the President just let the NOAA products speak for themselves?

Permalink Submitted by Anonymous on September 11, 2019 - 12:32pm
99.99% of Americans were completely unaware of this "story", and still would be had not the fake news tried to make political propaganda out of it. Did you hear that Republicans just swept the elections in North Carolina that the fake news had previously been reporting they were going to lose? Then ask your fake news outlet why they report propaganda and not news?

Permalink Submitted by Josie on September 11, 2019 - 8:45am
hard to spin Sharpiegate dufus, but I knew idiots would try. You wingnuts will do anything to protect Spanky, sad commentary indeed...

Permalink Submitted by Lynn Anderson on September 11, 2019 - 7:16am
The real truth, Barbara, lies in this article. There are actually some media that believe in FACTS unlike CNN that did not tell the complete story. By leaving that one graphic out of their "report," it distorted the truth. Of course their purpose is always to go after the president no matter what. I see nothing wrong with the Sharpie--it made the point. So, if people are going to believe only what they see "with their own eyes," then we all are in trouble when it comes to the Fake News media. Thank you Sunshine State News and Brad Slager.

Are you talking about the

Permalink Submitted by Voted yes on 2 on September 11, 2019 - 6:43pm
Are you talking about the graphic that NOAA showed on Thursday and by the time Chump made that comments on a Sunday. Alabama has absolutely zero chance of being affected. Is that the graphic you are talking about. Either chump is vastly incompetent or he was getting his hurricane update 3 days old.

Are you talking about the

Permalink Submitted by Voted yes on 2 on September 11, 2019 - 4:21pm
Are you talking about the graphic that NOAA showed on Thursday and by the time Chump made that comments on a Sunday. Alabama has absolutely zero chance of being affected. Is that the graphic you are talking about. Either chump is vastly incompetent or he was getting his hurricane update 3 days old.

Well a little non story gets

Permalink Submitted by jroger on September 11, 2019 - 6:58am
Well a little non story gets all the attention by tiny minds with TDS and the GOP election wins will get ignored if not totally they will be down played We will either see no reports of the votes at all or downplaying of the significance by the Fake News

No matter how you slice it,

Permalink Submitted by Barbara on September 11, 2019 - 6:48am
No matter how you slice it, the Sharpie is pathetic. How could his advisors not equip him with a better and more believable visual aid? Regardless of where absolute real truth lies, he was not served well by a hand-drawn extension of the cone into Alabama. I suggest we all just let go. What purpose is served by continuing this dialogue? People will have to believe what they will based on what they see with their own eyes.

Permalink Submitted by Anonymous on September 11, 2019 - 11:36am
The schlump-in-chief doesn't have any more "advisors" than a criminal cartel 'mastermind' does. The 'Don' does what the 'Don' wants!

And yet DNC = KKK is still