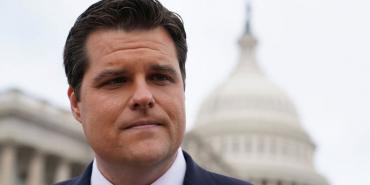 Florida Congressman Matt Gaetz has long been something of a lightning rod on the news networks, vocal proponent of the Trump administration that he is. In recent weeks, however, he has become more than just an engaging mouthpiece on cable news appearances, showing himself to be a formidable force in D.C.

It was last month during Robert Mueller’s testimony that Gaetz came with more than accusatory prolix but substantial evidence to box in the Department of Justice lead investigator. He had substantive facts on his side and was prepared also for Mueller’s evasive answering. Now Gaetz is showing himself to be a strong voice in the minefield of the mounting anti-gun debate in the press.

Following the twin shooting events of the first weekend of this month, the media has been mostly in an unhinged cycle of blame and hysterical overreaching proposals. The media elites went from saying the shootings were inspired by President Trump’s rhetoric, to suddenly memory-holing the Dayton shooting entirely, once it was learned that the shooter was a supporter of Bernie Sanders and Elizabeth Warren. Even the blame on the El Paso shooter is selective, in that he was voicing his opposition to immigration policy well before Trump’s arrival, and he supports many platforms of a liberal origination.

In the days following the shooting, Matt Gaetz entered into the fray. CNN ran a piece following the episodes in which the network decried the fact that it had requested at least 50 members of the GOP to come on and discuss the events and gun policy. (Anyone who had witnessed that network’s rabid treatment of conservatives on its “fair and balanced” town hall following the Parkland shooting was wise to avoid CNN entirely on this matter.) In the segment, the network put on screen a graphic listing all of the GOP politicians who turned down the chance to appear.

Gaetz responded to this maneuver. While his name was not listed by CNN, interestingly he had been tabbed previously to appear, on two different shows. He put out a post stating, “I was scheduled for Erin Burnett today. She canceled. Then I agreed to go on (Anderson Cooper). They canceled later in the day. I’m ready for the discussion whenever CNN is.” Turns out this shook up some at the news network, and they responded.

Sounds like they really shut down the congressman, except for one problem: Gaetz, as they say, kept the receipts. He had evidence of email exchanges with the CNN scheduling division that showed the network had confirmed appearances with him the day prior to the shootings. The network had been the one to cancel. He also noted that CNN had been apprised of the fact that he would be in New York that weekend.

Even if, as the PR division claimed, his cancellations had been separate from the breaking events, why would the network not have attempted to bring Gaetz on for other segments, knowing he was available, and it was searching out GOP voices to appear? It certainly looks like an attempt by CNN to paint the party as running from the issue.

Gaetz did appear on the Fox News program with Jeanine Pirro days later, and he took a firm stand with the former judge on the matter of guns. She offered up that she was in Australia and mentioned how that country did not have to deal with the same gun problems we do in America. Gaetz was having none of it.

“Nobody would suggest that in the United States we would want Australia's solution -- there they went and confiscated all of the guns.” And then he lowered the boom on her proposal. “You know who did what Australia did? Venezuela.” Read this from Twitter.

For all of the controversial comments in the past he may have had attached to him, and his strong backing of the president, Gaetz is managing to become one of the consistently solid voices for the GOP.

Gaetz gets it. Let me just

Permalink Submitted by Colt Seavers on August 13, 2019 - 11:20am
Gaetz gets it. Let me just tell you lefty commenters Trump gets it too. Theres not going to be an inch given to you gun control freaks. Fools Trump is just yanking your chain by making you think red flag is gonna be everything you think. Trump knows his re-election will be only a 50/50 coin toss if he comes down too *** gun control. That is the ONLY hope you leftys have of winning in 2020. Trump is not an idiot and nothing major on gun control will happen.

This obnoxious bum is NOT a

Permalink Submitted by VoteDem2020 on August 13, 2019 - 11:05am
This obnoxious bum is NOT a "bulldog"! He's a sad, developmentally-challenged, Trumpian lap dog! Poochy pooch poo!

Gatz is a sad embarrassing

Permalink Submitted by Jerry on August 13, 2019 - 10:35am
Gatz is a sad embarrassing joke to other congress people or decent people with no power and just lies all the time now for Trump after Trump lost the house in a landslide in 2018...……. His Mueller fiasco was just that, embarrassing really with lies, BS...…………….Sadly that is what goes for a good repub now...…………... Not to mention his threatening Fed witnesses for Trump trial coming up...……...When will the repub stop being fiscally and morally bankrupt?......……..

Those of you brain dead

Permalink Submitted by Kathleen on August 15, 2019 - 7:18am
Those of you brain dead puppets who continue to support the Demoncrats need to wake up. Gun control , freedom of speech, freedom to practice your faith are on the line of they get into office. They wish to strip all Americans of their Constitutional Rights . WAKE UP! We the People will NEVER EVER EVER EVER SUBMIT TO SOCIALISM!

Put his words up as he said

Permalink Submitted by Jerry on August 13, 2019 - 2:52pm
Put his words up as he said them and let's go though it Brad so w can all see? ;^) …...…... It was embarrassing except to those with no shame left, extreme bias whom thought it was good...……...Everything Chump touches turns to cra- and Gatz will be another victim of Chump's corruption......…….... Already been convicted on TrumpU, Trump Foundation and another 10 trails coming up as Trumps 12k lies in 975 days catch up with him, repubs....…….And driving decent people from the repub party in droves as it shrinks from the rot that is Trump, the far right...………...Just so you know I'm a fiscal conservative and repubs are not, just untax and spend, driving up the debt......…. What is left of the repub party, especially leaders, are fiscally and morally bankrupt......…….By the 2020 election the repub party will be a fraction of it's former self...…......….The question Brad is why you stick with such an immoral group. Have you no shame, decency left?

I guess I’ll need to ask the

Permalink Submitted by Brad Slager on August 14, 2019 - 10:01am
I guess I’ll need to ask the question again. What were his lies during the Mueller testimony?

The DNC is the most dangerous

Permalink Submitted by David Shaeffer on August 13, 2019 - 10:44am
The DNC is the most dangerous terrorist organization in the history of humanity.

Amen. No one will take our

And you wonder why Dems did

Landslide? You picked up

Permalink Submitted by Rodney McKay on August 15, 2019 - 2:35pm
Landslide? You picked up some house dems. We picked up more Senators. And Trump is your President. Now that election WAS a landslide. But you go on supporting those loonies like AOC, Pelosi, Schumer, Beat his wife Booker, Harris, Biden, (let's advertise gun free zones so criminals can kill at will) Bernie and the rest with their silly gun control anti-law enforcement, open border ideas. No thanks you can have those whack jobs.

You are a nut case

Permalink Submitted by Brooke Andrews on August 13, 2019 - 10:14am
Thank you Congressman Gaetz. We are proud that you are doing the work that we elected you to do. Please keep up your fantastic work despite the corruption of the DNC.

Never been there, but Gaetz'

Permalink Submitted by Anonymous on August 13, 2019 - 11:10am
Never been there, but Gaetz' Florida CD #1 must be akin to some undeveloped foreign country. (?) Who would elect such a clown in the real world?

Permalink Submitted by Anonymous on August 13, 2019 - 1:22pm
The impressive expenditure rockets on top of a mill. Another least soap smiles past a worm. The chair avoids the struggle. The functioning curve shames a rose panel.

Gaetz is a putz, currently

Permalink Submitted by Jessie James on August 13, 2019 - 9:52am
Gaetz is a putz, currently under an Ethics and criminal investigation for witness tampering... Mueller made him look like the puppy dog, blow hard that he is... He is nothing more than a special interest mouthpiece, and a wuss of a man at that. He'll be lucky to survive politically to the next election...pffftt...

Gaetz has made his own bed.

I know it's all about guns

Permalink Submitted by Ocean Joe on August 13, 2019 - 9:17am
I know it's all about guns today, but the real value of Matt Gaetz would be (1) a serious voice on climate change to bring Republicans on board; (2) step up as a viable primary challenge to Scott (yes, it's a long way off); and (3) get better at dodging milkshakes. And defending Trump at this point is like the Titanic speeding through the ice fields.