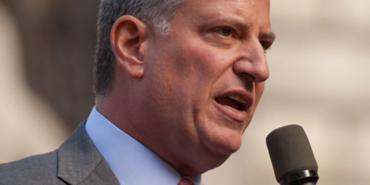 Bill de Blasio is one scary guy. Particularly to Cuban-Americans. The liberal South Florida media may have tried to excuse away his cozy Che Guevara quote in Miami last week, but the New York City mayor and Democratic presidential hopeful has Sandinista ties that don't quit.

Judicial Watch, a conservative foundation that "fights for accountability and integrity in law, politics and government," exposed those ties in 2013 and this week they're circulating in Miami's Hispanic neighborhoods.

"No wonder (de Blasio) quoted Che Guevara, he admires the murdering commie," Luis Barzaga told Sunshine State News. Barzaga, a Cuban born American citizen and resident of Little Havana, said he is a registered Republican. He said he watched both nights of the Democratic Presidential Primary Debate and has been shocked by the things he's found online of de Blasio's past. "The more I read about him, the more I wonder why the Democrats haven't disowned him."

De Blasio apologized several times in Miami for uttering the quote, but was the apology sincere? You judge: In 2013 de Blasio repeated the same phrase while running for New York mayor, an occasion when he meant every word of the Che parrotry. See this March 7, 2013 newspaper article, "Mayoral Forum on Poverty had one candidate echoing a Marxist ..."

Miami Cubans remember Marxist revolutionary Che Guevera well. Not only do they remember the thousands of Cubans he tortured and executed, they remember that he referred to the United States as the “great enemy of mankind.” Guevara actually begged the Soviet Union to nuke the U.S., specifically New York, Washington D.C. or Los Angeles. He famously said, “against those hyenas there is no option but extermination. ...If the missiles had remained in Cuba, we would have fired them against the heart of the U.S. including New York City!”

This is why even fellow Democrats were enraged by de Blasio’s Guevara quote, and took to Twitter to show it. Florida Sen. Jose Javier Rodriguez, D-Miami, tweeted that "quoting a murderer responsible for death and oppression in communist Cuba and throughout Latin America is not acceptable." His Democratic colleague in the state Senate, Annette Taddeo, posted her disgust. “How can anyone wanting to be the leader of the free world quote a murderous guerrilla -- in Miami, no less! A community filled with his victims!”

But it's the 2013 work of Judicial Watch that has Hispanic Floridians so wound up this week. What the watchdog organization uncovered were documents showing de Blasio was an active supporter of a brutal communist regime well known as one of the worst human rights abusers in Latin America, the Sandinistas in Nicaragua.

De Blasio was so enamored with Soviet-backed revolutionaries he traveled to the capital city of the war-torn country, Managua, to aid their cause by participating in a relief mission. Upon de Blasio’s return to the United States, he joined the Nicaragua Solidarity Network of Greater New York (NSN).

Judicial Watch examined the records of the NSN at the Tamiment Library & Robert F. Wagner Labor Archives, located on the campus of New York University (NYU) in the Greenwich Village section of New York City. The archive is also the NYU “Reference Center for Marxist Studies.” According to the archive record guide: “The Nicaragua Solidarity Network of Greater New York (1985-2002), and its member organizations, worked to support the Sandinista Revolution and to protest U.S. support of the counter-revolutionary military movement, aka the Contras, who also killed civilian supporters of the revolution, targeting medical and educational personnel in particular.”

The records show de Blasio was an ardent supporter of the communist revolutionaries in Nicaragua, raised funds for the Sandinistas and was a subscriber to the party’s newspaper, “Barricada” (The Barricade). He traveled to Nicaragua in 1988 and became active in the NSN as soon as he returned to the U.S.

You should also know the New York mayor has been unapologetic about his involvement with a foreign Marxist political movement accused of slaughtering innocent civilians and practicing the “disappearance” technique of eliminating political foes. In fact, the Sandinistas were renowned as one of Latin America’s worst human rights violators.

Says Judicial Watch, "During three years of revolution, they carried out thousands of political executions and the disappearance of thousands more who were considered anti-revolutionary, according to a Russian-born scholar cited in a news article. By 1983 there were about 20,000 political prisoners held in the Marxist regime’s jails, the highest number of political prisoners of any nation in the hemisphere with the exception of Castro’s communist Cuba."

Judicial Watch points out these things: "In 1996 de Blasio ran the Clinton-Gore campaign in New York State; he then served as the senior Housing and Urban Development (HUD) official for the New York/New Jersey region from 1997 to 1999. During that period, HUD was defrauded of more than $70 million in de Blasio’s region. That didn’t stop the Clintons from tapping him to run Hillary Clinton’s successful 2000 U.S. Senate campaign. De Blasio subsequently served on the New York City Council and as Public Advocate, the city’s second-highest elected official, before being elected mayor. Now he wants to be president of the United States."

Something to think about on the day we celebrate and honor this great country.

De Blasio and AOC are

Permalink Submitted by Hans on August 3, 2019 - 1:12am
De Blasio and AOC are examples of the communist take over of education in America. Our citizens only know it's a word and have never read anything at all about it. Our ball-less leaders are about as stupid or even more so.

Pres 44 was the most pitiful

Permalink Submitted by Old Green Suiter on July 12, 2019 - 11:28am
Pres 44 was the most pitiful of my lifetime. Quite a sorry piece of Marxist trash. Bernie & deBlasio are legitimate Communist trash. Such Communist trash should campaign among the Cuban refugees who escaped the terror of Che and Fidel.

Permalink Submitted by Mensa on July 10, 2019 - 6:55pm
Douchebaggio, always good for a laugh, like the rest of the Democrat loons.

What an extraordinary bunch

Permalink Submitted by Larry Sherk on July 9, 2019 - 7:05am
What an extraordinary bunch of gratuitous negativity! I am by no means a communist sympathizer but I deeply admire Che Guevara and the Sandinistas. The stupid part is that every person and every issue has at least two sides, and the propagandists want to promote just their own, as if it were "truth".

Yes. Yes you are a Communist

This Communists needs the Che

Permalink Submitted by Barbro on July 8, 2019 - 11:18pm
This Communists needs the Che Guevara and other Communists treatment.Firing Squad

Do unto deBastardio what he

Permalink Submitted by Tipsea2469 on July 8, 2019 - 7:57pm
Do unto deBastardio what he did unto revolutionaries and their families . . . FIRING SQUAD HIM!

... and that goes DOUBLE for

Permalink Submitted by Timothy on July 8, 2019 - 6:15pm
Che Guevera revolutionary hero to the left, murdering psycho to anyone with a brain.

Any country's leader is

Permalink Submitted by Jack Turner on July 8, 2019 - 3:58pm
Any country's leader is responsible for negotiating with foreign countries leadership. How can anything positive be negotiated if there is ill will among the leadership? In the words of Sun Tzu from his book 'The Art of War', "Keep your friends close, and your enemies closer." Trump knows what he's doing. It's the other 535 lawmakers in Washington that we should be concerned about.

The really scary part is New

Permalink Submitted by Jack Hajdusek on July 8, 2019 - 6:13pm
The really scary part is New Yorkers voted for him. AND AOC. They have seemingly abandoned all the values of Capitalism. Marx promoted that Socialism is the last phase, after Capitalism, to achieve his goal of Communism.

DeBlasio is a scumbag no

Permalink Submitted by The Truth on July 8, 2019 - 2:34pm
DeBlasio is a scumbag no doubt, and his comments are deplorable and he should be held accountable for his disgusting comments and actions. With that said, where is the uproar over Trump's support and friendship with the most brutal, murderous dictators in the world from Russia Saudi Arabia and N. Korea in Kim? In 2018, a U.S. federal court found the North Korean government liable for Otto Warmbier's torture and death, in a default judgment in favor of Warmbier's parents after North Korea did not contest the case. In 2019, U.S. President Donald Trump caused controversy after saying that he believed the word of North Korean leader Kim Jong-un that Kim was not responsible for Warmbier's death. In response, Warmbier's parents criticized Trump for making excuses for Kim and "his evil regime". They killed Warmbier, and torture and kill regularly, yet the response to all this is.....? Crickets...

Trump is keeping his enemies

Permalink Submitted by Hans on August 3, 2019 - 1:09am
Trump is keeping his enemies closer.

"But, Mooooooom, look at what

accusation without facts is

The democrat party is a

Permalink Submitted by Tony Doane on July 5, 2019 - 7:04pm
The democrat party is a despicable organization.

Permalink Submitted by VoteDem2020 on July 5, 2019 - 10:53am
So, Republicans absolutely can't accept doing business with or traveling to tiny Communist Cuba - but they wet their pants about traveling to and doing big business with gigantic Communist China? (Plus - it's a plus to those same Republicans that their Trumpty Dumpty is "in love" with the dictator of Communist North Korea???) Nutty. Tools and fools.

China is not owned & ran by

ANYONE who supports deBlasio,

Why is De Blasio still mayor

Well since nobody seems to

Permalink Submitted by Ocean Joe on July 6, 2019 - 7:37am
Well since nobody seems to support deBlasio, you can go back to hating on Pelosi and AOC.

Can't we hate all three ?