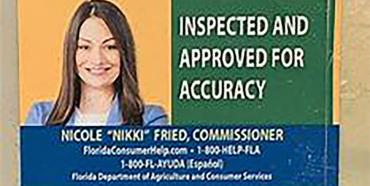 With Department of Agriculture and Consumer Services inspectors conducting sweeps statewide for illegal “skimmer” devices intended to steal credit card information, many pumps will have the bright yellow, green and blue stickers well beyond July 1, the start of the upcoming fiscal year.

Asked about the stickers last week, Fried said she will follow a requirement Republican leaders placed in a budget implementing bill (SB 2502) to limit stickers affixed to gas pumps to only “a combination of lettering, numbering, words, or the department logo.” Gov. Ron DeSantis is expected to sign the implementing bill, possibly as early as Friday.

“The implementing bill is tied to the budget, so during the 2019-2020 fiscal year we will not be able to purchase any new stickers,” Fried said when asked about the fate of the stickers.

The only statewide elected Democrat, Fried drew Republican ire when she started to replace stickers from when Republican Adam Putnam was the agriculture commissioner.

The concern is the stickers with Fried’s picture are being used to gain free political exposure for an eventual re-election bid or a run for higher office in 2022.

Under Putnam, the stickers featured the department logo, along with a code intended to direct consumers to an online help site to express concerns about fraud.

Fried said the stickers are about accountability. In addition to Fried’s face, the new stickers say, “inspected and approved for accuracy,” along with her name and a consumer assistance web address and phone number.

“When our inspectors went out to sweep all the skimmers across the state, our stickers have been placed up there so the consumers understand when they see fraud happening at the pump, they know exactly who to call,” Fried said.

Freshly back from an economic development mission to Israel, DeSantis is eyeing his next foreign excursion. This time he is considering a trip to several South American countries, where some concerns have been expressed that potential travelers may consider the new state immigration law before making Florida a destination.

“I would love to be able to visit a free Venezuela, unfortunately that hasn’t happened as quickly as I would have hoped,” DeSantis responded to a question from Telemundo after signing the sanctuary city bill Friday in Okaloosa County.

“I would love to be able to engage with a free Venezuela, but of course we do want to do Brazil, Colombia, I think those are really key to Florida’s tourism industry,” DeSantis continued. “And those are countries that have some people that really want to spend some money. We welcome that in Florida, and I don’t think this (the new law) is going to have any impact on that except for the fact that our communities, I think, will be safe.”

Meanwhile, the Florida Democratic Party warned that the law will “put Florida on the map as one of the most anti-immigrant states in our country.”

“It is a xenophobic and hateful bill that would only create harm in our communities of color, negatively impact our economy and prevent thousands of tourists from visiting our beautiful state,” state Democratic Chairwoman Terrie Rizzo said in a prepared statement.

In April, the American Civil Liberties Union issued a travel alert for Florida, in part because it said the pending law would create an “increased likelihood of racial profiling, unjust detention and possible deportation.”

Brazil is the state’s top trade partner, with $20.7 billion in trade in 2018, a 3.1 percent increase from the previous year, according to the Florida Ports Council. At $7.2 billion in trade, Florida accounts for 27 percent of all U.S. imports and exports with Colombia, the most of any state.

CITIZENS ON THE ROAD

Citizens Property Insurance policyholders may have a better chance next year to see in person the insurer’s Board of Governors.

Board members on Wednesday agreed to consider rotating meeting locations across the state, rather than what has become their quarterly gathering spot at the Sheraton Orlando North in Maitland. The Central Florida hotel is considered a mid-point between the state-backed insurer’s Tallahassee, Jacksonville and Tampa offices.

President and CEO Barry Gilway said even though the headquarters is in Tallahassee, a board meeting in the state capital would be “very expensive” and there is limited space.

Board member Bo Rivard, a Bay County resident who recently completed a term on the Florida Fish and Wildlife Conservation Commission, put in a plug for his community, saying “maybe consider the part of the state that sues us the least.”

The change wouldn’t occur until next year because the logistics for September and December meetings have already been set.

TWEET OF THE WEEK: “Unnamed reporter after Governor’s press conference: “...I put on pants for this?” --- Florida Politics reporter Jim Rosica (@JimRosicaFL)

With that hairdo, Fried looks

Permalink Submitted by C Breeze on June 24, 2019 - 11:05am
With that hairdo, Fried looks like an indian peeking out of a teepee... Some people will do ANYTHING for attention,...and Fried is definitely "one of those"!

you're the last one to be

Permalink Submitted by pasture breeze on June 25, 2019 - 2:33pm
you're the last one to be talking about looks fat boy. It's time to haul tail back to NY and get a job tiny...

I would prefer a larger

Permalink Submitted by Andy Gillum on June 21, 2019 - 1:57pm
I would prefer a larger picture of Nikki on the pumps in a bikini. Make Florida Gas Pumps Great Again #MFGPGA

Geez, what if that picture on

Permalink Submitted by Charlotte Greenbarg on June 21, 2019 - 9:03am
Unnamed reporter....nobody promised you a rose garden.