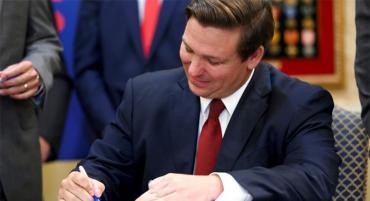 Sanctuary cities. The term leaves me cold. Initiated by the Left, it's a politically correct euphemism for Capturing New Voters.

Democratic leadership and the mainstream media would turn all 50 states into sanctuary fiefdoms. That's because -- to repeat their talking points -- they're the good guys, the humanitarians, the wholly righteous. They care about the homeless, those forced out of their own countries fearing for their lives. They think about the families and the children. Unlike Republicans who would fight like the devil to ban sanctuary cities, who grew up as I did, following rules, obeying laws, part of an orderly immigration system that built a nation on immigrant genius, ingenuity and backbone.

So I thank the Republican Florida Legislature for having the courage to pass Senate Bill 168 and Gov. Ron DeSantis for the wisdom to stick to his guns and sign it. The health, safety and welfare of Floridians should not be negotiable.

"Earlier this year, I made a promise that we would ban sanctuary cities in Florida and today we are delivering on that promise," DeSantis told a gathering of 300 at the Friday bill-signing in Okaloosa County. "I am proud to sign the bill presented to me by the Florida Legislature to uphold the rule of law and ensure that our communities are safe."

Hundreds of cities and municipalities in the U.S. have "sanctuary city" status. In these cities illegal immigrants are shielded from deportation. Sanctuary city status bars police and prison officials from telling Immigration and Customs Enforcement (ICE) about an illegal immigrant’s release from prison.

As far as I can see, sanctuary cities are against the law already. They violate two federal statutes.

"The case against sanctuary cities is very straightforward," said Kris Kobach, principal author of the Arizona SB 1070 enforcement law. "There are two laws that Congress passed in 1996 that expressly forbid sanctuary cities and they are found at Title 8 Section 1373 and Title 8 Section 1644 of the U.S. Code. Those statutes say in plain English that a city may not have a policy that prohibits its officers from communicating with the federal government about a person’s immigration status."

People who are in this country illegally exhaust the resources of our schools, hospitals and local governments -- resources that should be directed toward those who deserve to receive them because they are paying taxes. They take jobs away from others who have rightly earned them. More important, illegal immigrants are an insult to the millions of other immigrants who abided by the law and went through the process to get a green card or become a citizen. Those are the people who deserve jobs and government support like any naturalized citizen, and they are the ones who are hurt most by those here illegally.

It beats me why the U.S. Justice Department hasn't bothered to enforce the law.

The most authoritative national survey on sanctuary cities in the last three years was 2017's Harvard-Harris poll, which showed the American people want the law enforced. A whopping 80 percent of voters nationwide oppose sanctuary cities and say local authorities should have to comply with the law by reporting to federal agents the illegal immigrants they come into contact with. Oh, yes, and 75 percent of voters want increased border patrols. Have a look at immigration poll results on a state-by-state basis by clicking here.

Immigration in this country used to follow a regular pattern. In the three centuries prior to 1910, most immigrants hailed from Western and Northern Europe. After 1910, they came from Eastern and Southern Europe, Canada and Latin America. Ellis Island, New York, processed thousands of immigrants a day where each person was asked a series of probing questions, including, “Are you an anarchist?” The immigrants were then examined by doctors and nurses. People with criminal records, carriers of disease (and all those revolutionary anarchists) were sent home. The flood of immigrants was greatly reduced in the 1920s, partially as a result of World War I. The Ellis Island system was solid and sacrosanct. If you wanted United States citizenship, you had to follow the rules.

In October 1965, President Lyndon Johnson signed the Teddy Kennedy Immigration and Nationality Act into law on Liberty Island, N.Y. The Act wasn't such a bad thing at all. It expanded immigration to increase immigrant flow from eastern and southern Europe.

At the signing, Johnson said, “This bill says simply that from this day forth those wishing to immigrate to America shall be admitted on the basis of their skills and their close relationship to those already here. This is a simple test, and it is a fair test. Those who can contribute most to this country -- to its growth, to its strength, to its spirit -- will be the first admitted to this land.”

One of my sons who works for the Catholic Church in Haiti and in Central America, tells me talk of sanctuary cities moves like an electric undercurrent through towns and villages, particularly those in countries close to the Mexican border. Sanctuary cities in America not only lure illegals north, they have incentivized a cottage industry of guides, called coyotes, who are paid exorbitant fees to navigate immigrants' passage across the border. Some of the them, he told me, die along the way.

I think PJ Media's Victor Davis Hanson sums up sanctuary cities best with his piece, "The Nihilism of Sanctuary Cities." He writes, "The idea of a sanctuary city is Confederate to the core, reminiscent of antebellum Southern states picking and choosing which federal statutes they would abide by or reject. ...

"Much of the rural West opposes the Endangered Species Act. Can Wyoming declare that federally protected rats and bugs are not protected inside its state borders, when such pests obstruct construction of dams or highways? Many conservatives oppose federal restrictions on gun sales. Could Oklahoma City declare hand-gun purchases within its city-limits free of federal firearms statutes? Perhaps Little Rock could ignore a Supreme Court ruling and announce that gay marriage is not legal within its jurisdiction. ..."

Opponents of Florida's new ban argue we didn't need one because Florida doesn't have a sanctuary city. Isn't that all the more reason to make our statement sooner rather than later? We need an immigration policy, not a collection of defiant cities making their own rules. Thank you again, Governor and legislative leadership.

Baloney! There were/are no

Permalink Submitted by VoteDem2020 on June 17, 2019 - 11:44am
Baloney! There were/are no "sanctuary cities" in Florida ... and nobody out there was trying to promote one. This whole thing is nothing more than Gruters grandstanding to puff-up his 'brand' among the party animals so he can ultimately run for Governor down the road.

WRONG! The purpose is

Permalink Submitted by Larry Vannote on June 17, 2019 - 12:34pm
WRONG! The purpose is preemptive because we know that when President Trump gets reelected the left will go toe-fungus berserk. This will make their actions punishable.

First of all, Trump won't get

Permalink Submitted by VoteDem2020 on June 18, 2019 - 12:23pm
First of all, Trump won't get re-elected. Secondly, county and municipal law enforcement authorities will run their respective organizations as they see fit ... and whether they do it in accordance with approved procedures and the law will be up to a court to determine, most likely on a case-by-case basis. 'Gruter's Law' here is just a Republican blowhard's attempt at getting attention and trying to develop some kind of relevance in wacky Trump World.

The political party of

Permalink Submitted by C Breeze on June 16, 2019 - 6:33am
The political party of Democrats has been, and still is, out of touch with reality and wallowing in an inescapable, self inflicted, "death spiral": "Rest In Peace suicidal losers.."

My real time work with

Permalink Submitted by Mandy L. Bradley on June 17, 2019 - 9:44am
My real time work with facebook Im makin g over $2000 a month operating low maint­enance. I continued h­earing distinctive people divulge to me how an lousy lot cash they can make on line so I selected to research it. All topics considered, it become all legitimate and has without a doubt changed my life. For more statistics visit below site

Thank you for that great tip.

THE STAMPEDE AT OUR SOUTHERN

Permalink Submitted by mira vanzandt on June 15, 2019 - 11:00am
THE STAMPEDE AT OUR SOUTHERN BORDER: Lets see, we have Democrat / Socialist / Activists in the Northern Triangle of South America & Mexico; even as you read this instructing the populations the "benefits" & laws of coming to the USA and to make sure you bring your children and use the the magic words....."credible fear." Mexico recently arrested two socialist activists who were instrumental in the organizing of prior caravans, Then you have a Democrat House saying the crisis is "manufactured" as literally thousands attack our border daily? National Sovereignty is a myth to Democrats. The crisis is manufactured...by the Democrats themselves. Make no mistake about this, Democrats want this to happen and never stop.. They will with hold border security support allowing as many illegal aliens to enter the country as possible overwhelming our BP & ICE before assisting in border security (if ever). THE LIE OF TPS / DACA: To Democrats/Progressives/Socialists (whats the difference?) programs like Temporary Protective Status (TPS) or Deferred Action for Childhood arrivals (DACA) are permanent programs. There is nothing "temporary or deferred" about these programs to Democrats. These programs are designed to admit refugees (usually from the third world) then Democrats fight to keep them here permanently using the charge of racism, religion, guilt, against anyone opposed. Simple formula works great. The current migration at our border is costing taxpayers a Kings ransom. Fleeing persecution? or fleeing for freebies? they sure don't stay in Mexico when they reach "safety" or ask or offered political asylum in Mexico. Why? because Mexico will give them NOTHING. So they make the long journey to our border, our generous Democrats