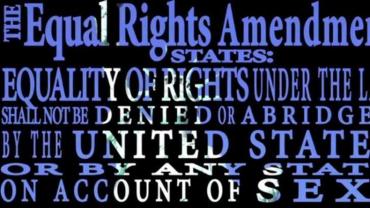 Only 1,203 miles separate Seneca Falls, N.Y. from Tallahassee. Philosophically, the two cities have been light years apart -- until now.

The Florida Legislature and Gov. Ron DeSantis could make history that would make the birthplace of the U.S. women’s rights movement proud.

Thirty-seven states have ratified the Equal Rights Amendment -- one short of the required three-quarters for passage. That final state could be Florida.

The ERA is a proposed amendment to the U.S. Constitution designed to guarantee equal legal rights for all American citizens regardless of sex.

There are two bills in the Florida Legislature -- HCR 209, sponsored by Rep. Dotie Joseph, D-North Miami, and SCR 266, sponsored by Sen. Audrey Gibson, D-Jacksonville -- to adopt the ERA.

A press conference in Tallahassee is scheduled at 12:30 p.m. Tuesday to promote its passage.

The effort to put the ERA over the top is bipartisan.

Former Illinois Congressman Steve Andersson, a Republican, has been stumping the country, promoting passage of the amendment in states like Florida that have yet to ratify. He was in Tampa Friday addressing the Athena Club, formed in 1976, with ERA passage as a main goal.

Steve Andersson
“The 'Me Too' movement and Women’s March,” regalvanized the issue," the engaging Andersson told Sunshine State News. “Republicans used to be pro-ERA but the influence of the religious right changed all that. This issue has been filled with false narratives such as the proliferation of unisex bathrooms. It’s time to get this resolved. Republicans can be heroes again.”

Andersson noted that remaining target states bleed red or purple, noting all the low hanging fruit has signed on.

Former Tampa City Councilwoman Linda Saul-Sena, highly respected for her continued involvement in helping shape public policy after leaving political office, believes DeSantis may be amenable to favoring the amendment. She noted that his concern for the environment and pro-cannabis stances show his flexibility.

Linda Saul-Sena
Saul-Sena, a Democrat, said the national perception of Florida would fly off the charts if the state put the ERA over the top. Then she explained why the amendment is still needed.

“Though laws like Title IX and the Pregnancy Discrimination Act of 1978 are meant to protect women, these legislative endeavors do not protect everyone. They can be rolled back by a simple congressional vote, and they do not provide the firm, lasting protection of a constitutional amendment,” Saul-Sena explained.

Athena President Betty Castor, a former Florida commissioner of education and president of the University of South Florida, asserted, “We’re not competing with Georgia, North Carolina, Virginia and/or Arizona for the honor of putting it ‘over the top,’ but we believe Florida would make a statement about equality, fairness, and the importance of economic opportunity if we were to become the state that finally gets it done.”

Originally, the ERA enjoyed wide, bipartisan support including that of both major political parties, both houses of Congress, and Presidents Nixon, Ford and Carter.  The schism brought by anti-feminist Phyllis Schlafly finally healed and last year, Illinois became the 37th state to adopt the ERA.

The United States ranks 20th of developed nations in the just-published Glass Ceiling Index in The Economist magazine. Funny how Republicans are

Permalink Submitted by VoteDem2020 on March 11, 2019 - 11:27am
Funny how Republicans are always against equal rights for all! For them, it's all about their 'tribal members' and their preferred 'special interests'!

Permalink Submitted by Cheryl L Walker on March 11, 2019 - 11:45am
Don't fool yourself. Everyone has their own interest. So-called special interests is normal. You just have your own that conflict with someone else's. It's OK. You're HUMAN! Im human. My mom used to say, "the pot's calling the kettle black!"

A rapist has his own interest

Permalink Submitted by Douglas Johnson on March 11, 2019 - 7:51am
Planned Parenthood, NARAL, Women's Law Project, et al, have used state ERAs as legal battering rams to get tax-funded abortion, and would do the same with the federal ERA if they could. Pro-life Florida legislators won't be fooled. More here: https://www.nrlc.org/site/federal/era/

I am sick of identity

Permalink Submitted by S.A. Croft on March 10, 2019 - 4:11pm
I am sick of identity politics. I am tired of the Progressive's agenda to cause division and separation. I am tired of the self serving who will always see themselves as victims. In this country if you work hard and are willing to sacrifice you can be successful without getting the government to shove special rights down everyone else's throats. The ERA Amendment has not passed because of the far reaching consequences and hidden dangers in it. Don't pass the ERA Amendment in Florida.

This is why I pray. We have

Permalink Submitted by Cheryl on March 11, 2019 - 11:49am
This is why I pray. We have to be discerning. The Bible says that there is a way that only SEEMS right to a man, but the end of that way is destruction! We all need WISDOM that's Divine

Why is it that when those us

Permalink Submitted by Jay on March 10, 2019 - 12:02pm
Why is it that when those us in Florida want to see a change for the good like the passage of the ERA we are met by people who live in the 1950's? No we have to have to look like silly ultra conservatives that want to ;live in the past. It is crazy!

The term sex is ambiguous,

Permalink Submitted by Ivan Durakov on March 10, 2019 - 11:16am
The term sex is ambiguous, and the amendment has little to do with any glass ceiling. If passed, it will become the cornerstone of state-sanctioned pedophilia committed against child sex slaves. The federal court challenges will arrive like a tidal wave, and all the Demshevik loyal judges will finally put their end game in place.

Thanks for a great article!

Permalink Submitted by Linda Saul-Sena on March 9, 2019 - 4:41pm
Thanks for a great article! The ERA press conference time has been changed to Tuesday, March 12 at 12:30 at the Capital

I was at the press conference

Permalink Submitted by Kathy Harrington on March 12, 2019 - 10:09pm
I was at the press conference today

The time for ratification has

Obviously you are not a

Permalink Submitted by Agnes Willow on March 9, 2019 - 10:36am
Obviously you are not a lawyer or even in possession of all the facts. Also, you either have no significant other or if there is one so unfortunate, she is treated like a slave.

"OBVIOUSLY", you MUST be a

Permalink Submitted by W. C. Green on March 9, 2019 - 11:22am
I was told in the 1970s that I was making 70% of what a man earned. I was-- at the beginning of my career, but a few years' experience brought me up to par. Every thing has changed since then for women except the insistence that we're all still oppressed and making 30% less. It may have been true for many then, but it's not true now..

The Constitution all ready

Permalink Submitted by Robert on March 9, 2019 - 9:02am
The Constitution all ready covers this! There is no reason for this libartard amendment!

Yes there is a clause in

Permalink Submitted by Joe the Voter on March 13, 2019 - 12:23pm
Yes there is a clause in Constitution re. Equal rights. But the problem is that legislators don't care about the constitution. Had the Constitutional provision been followed we would not have needed more amendments to protect those rights such as giving the right to vote to women, or blacks. Or to allow blacks to go to same schools as whites and so on and so on. Just because something is in the Constitution does not guarantee Americans no longer have to fight to actually enjoy those rights when States and Congress keeps writing laws to ignore those rights.

The ERA amendment was a bad

Permalink Submitted by Al on March 9, 2019 - 8:50am
The ERA amendment was a bad idea in the 70's how is it any different today. They say it will help women shatter the "glass ceiling" but I think that's already been done.

In THIS country (and State),

Permalink Submitted by C Breeze on March 10, 2019 - 9:58am
In THIS country (and State), the "ERA Amendment" is "MUCH ADO ABOUT NOTHING",.. and ALREADY academically theoretical, as well as narrowly focused pedantically, in the "American way of life"...

Says the sad excuse who has

How can you be sure he is not

Permalink Submitted by Anonymous on March 10, 2019 - 7:27pm
He's right, just take a look at this Congressional Session; "pettiness, animosity and vindictiveness", and that's just from the Democrat women.