Ever wonder where "assignment of benefits" abuse came from?

Let me introduce you to Harvey V. Cohen of Orlando and Maitland and any place else where tragedy has befallen Florida homeowners. Cohen is the self-professed "go-to attorney for assignment of benefits contract cases ... known throughout the state of Florida and nationwide," reads his bio.

Which I don't doubt for one minute.

In 2006 there were only 405 AOB lawsuits across all of Florida's 67 counties. Then Cohen figured out how to cash in on hurricanes.

AOB started out as a document to protect consumers beset by property damage from slow-paying insurers. It allowed a third party, such as a water extraction company, a roofer or a plumber, to "stand in the insured's shoes," get on with fixing the damage and seek direct payment from the insurance company. Little did state lawmakers realize Cohen would turn AOB into a cottage industry for himself and a few other unscrupulous lawyers and contractors -- many of the contractors unlicensed -- to generate legal fees, drive insurance companies out of the state and inflate property-insurance claims, often making unwitting Floridians victims of fraud.

Former Florida Supreme Court Justice Ken Bell, testifying on behalf of the Personal Insurance Federation of Florida, Inc. (PIFF), told the Senate Banking and Insurance Committee last Monday there was "no crisis of bad faith" involving insurers to justify all of the lawsuits. "Yet, AOBs are so out of hand that in the 12 months of 2018, just one Florida attorney was responsible for filing 30,000 AOB lawsuits -- that's 125 lawsuits a day."

Justice Bell tells contractors, “You don't need an AOB to get paid as a contractor. This started with a very creative idea by one attorney (Cohen) to extend AOB from PIP to residential property and auto glass. But AOB is not required or driven by problems confronting consumers.”

Most observers speculate that it was the calm after the storm that turned Cohen into the Johnny Appleseed of AOB abuse. What he did, they say, is take advantage of the glut of roofing contractors, water remediators, plumbers and similar contractors who set up shop immediately after Florida's worst hurricane year, 2004. Then, when the big storms stopped coming, they had to find another way to prosper. Many did so honestly. But trial-lawyer Cohen launched a very attractive mentoring campaign -- advertising for contractors and vendors -- in effect recruiting them -- even putting out flyers and conducting seminars. And it was like dropping a match on a bed of pine needles. 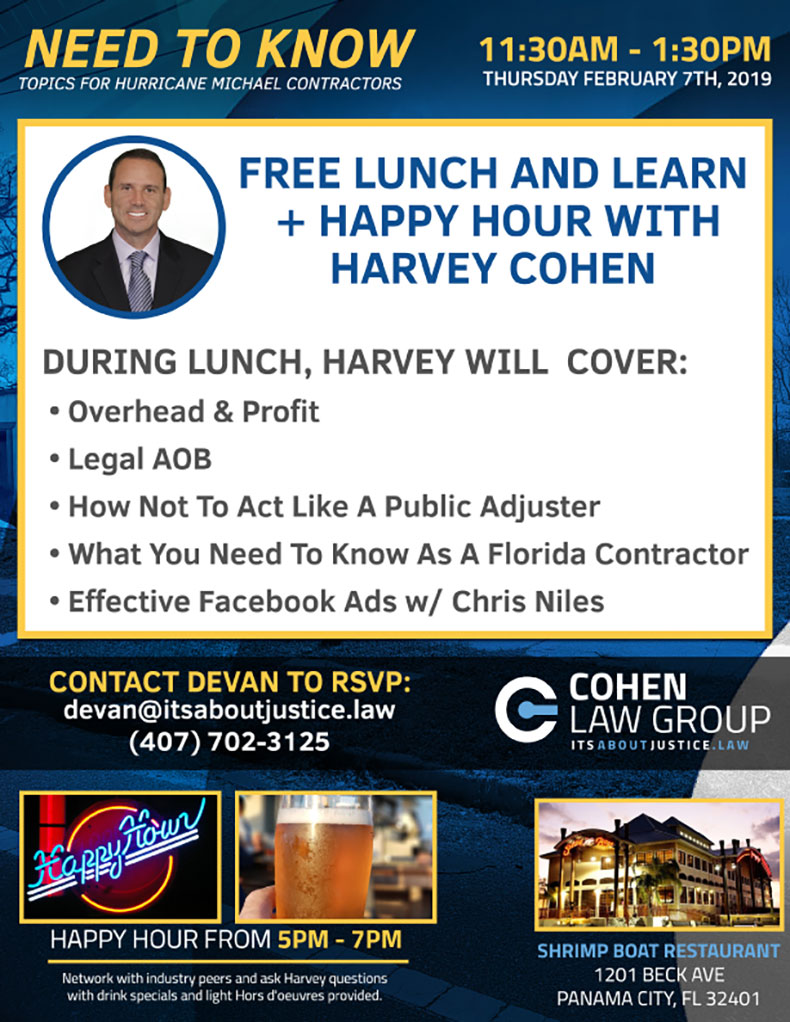 Cohen, on his office website, tells us exactly how he gave birth to his business. "In 2004 and 2005 during the many hurricanes we had here in Florida ... Mr. Cohen met with some restoration companies and thought of a way to teach assignment of benefits so that they could get paid directly from insurance companies, just like medical doctors and PIP suits. Mr. Cohen has literally handled thousands of insurance claims."

Cohen doesn't file many lawsuits himself. He leaves that to his staff of associates. Who, according to court records, are exceedingly busy. One of them, Isabel M. Arias, for instance, filed 3,380 mostly AOB lawsuits just in the Miami area during 2018, 2017 and a handful during 2016.

Ironically, on Thursday -- same day as Justice Bell is testifying about Cohen's activities before the House Civil Justice Subcommittee -- the Orlando lawyer is bringing his "lunch and learn" and "happy hour" seminars to the Shrimp Boat Restaurant in Panama City, ground zero for misery-making Hurricane Michael devastation. (See one of his ads for the seminars on this page.)

According to one of Cohen's ads for the event: "You should attend if you're in the following industries -- Restoration, Mold Remediation, General Contracting, Plumbing, (and) Roofing."

It's as if Cohen franchises.

I was unable to reach Cohen on Wednesday.

The bottom line is, this is what Johnny Appleseed does, teaches to amass contractors who throw business his way. It's how he grows his business.

Doug Broxson, R-Gulf Breeze, chairman of the Senate Banking and Insurance Committee, vowed in an impassioned statement during the Jan. 22 meeting of his committee to make this the year assignment of benefits abuse in Florida gets fixed.

Cohen looks to be expanding rapidly. Let's hope Sen. Broxson can pull it off.

Predators come in all shapes

Permalink Submitted by VotedBlue on February 7, 2019 - 1:30pm
Predators come in all shapes and sizes and in all fields of endeavor. It's always about the money, money, money ... and screw the consumers.

And so we will have more

Permalink Submitted by Sharon Henry on February 7, 2019 - 1:24pm
And so we will have more committees and arguments while this crap continues. I hope there is a special place in Hell.

Permalink Submitted by C Breeze on February 7, 2019 - 1:00pm
"In days of old",.. this "breed" were known as "Ambulance Chasers" (can you recognize the 'connection' to seemingly endless "TV lawyer advertisments" nowadays)..?

Permalink Submitted by C Breeze on February 7, 2019 - 12:52pm
NEVER doubt lawyers' willingness to "pounce upon a corpse" in order to enhance their own wellbeing (that's "an age old trait" of the "practice") ! ! ! There's just not enough 'real' work for all of these "buzzards"; that's why way too many of them opt to 'run for political office' and "attach themselves comfortably to government-mammaries"!

I believe u are a good

Permalink Submitted by Dan on February 8, 2019 - 9:26am
I believe u are a good carpenter because u hit the nail on the head.