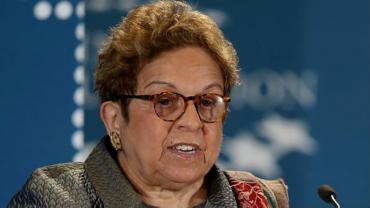 After eight years in the Clinton Cabinet as secretary of Health and Human Services (HHS), now that she is in Congress, U.S. Rep. Donna Shalala, D-Fla., is starting to focus on healthcare issues.

This week, from her new perch on the U.S House Education and Labor Committee, the South Florida Democrat weighed in on the “the various threats presented by House Republicans and the Trump Administration to the Affordable Care Act’s protections for American workers with preexisting medical conditions.”

Not surprisingly, Shalala, one of the architects of Bill and Hillary Clinton’s healthcare proposal, went to bat for Barack Obama’s healthcare law.

“Since March 2010, when President Obama signed the Affordable Care Act into law, House Republicans have voted more than 70 times to repeal all, or part of the ACA,” Shalala said on Wednesday. “Despite their long assault on the ACA, the GOP has yet to develop an alternative that would continue to safeguard the more than 133 million Americans with preexisting conditions who depend on the protections of the ACA.  Whether you get your insurance from your employer, Medicare, or through the exchange you have something to lose if the ACA is repealed or overturned. We owe it to the public to not only defend the Affordable Care Act, but examine the threats to its continued existence.”

Shalala’s team insisted “the Affordable Care Act is under attack in our courts, due to legal challenges brought by Republican Attorneys General such as the Texas v. United States" and claimed “if the Republican Attorneys General were to prevail, 17 million Americans would lose their health insurance and nearly everyone else would have less comprehensive health care coverage.” In contrast, her team maintained “Democrats in Congress are committed to preserving the ACA, as well as expanding and protecting access to affordable healthcare for all Americans” which “includes working to lower the price of prescription drugs and shielding consumers from expensive out-of-pocket costs.”

The freshman Democrat does have a few key assignments which gives her more pull on Capitol Hill than most first term members, including a coveted spot on the powerful U.S. House Rules Committee which determines what bills make it to the House floor.

Towards the end of last month, Shalala, who led the University of Miami, was assigned to its Subcommittee on Health, Employment, Labor, and Pensions which, as her office noted, oversees “employment-related health and retirement security, including but not limited to pension, health, other employee benefits, and the Employee Retirement Income Security Act.”

With longtime U.S. Rep. Ileana Ros-Lehtinen, R-Fla., retiring from Congress, Shalala ran for the House and flipped the seat in November.

EVERY Democrat at every level

Permalink Submitted by VotedBlue on February 11, 2019 - 11:17am
EVERY Democrat at every level should have a single objective at this point: Win the presidency and the senate in 2020 ... and keep the house. Trying to accomplish anything else is a waste of time given the current crop of Republicans running the White House and the senate. (In Florida, the Dems also need to focus on taking over the state senate.)

We elected a former HHS

Permalink Submitted by Thomas Lash on February 11, 2019 - 9:44am
We elected a former HHS secretary that never fixed healthcare the first time, and someone that was in charge of the Clinton Foundation the most corrupt organization in the world to congress. It’s sickening that she’s not being investigated and charged with high crimes.