The All for Transportation (AFT) 30-year, $16 billion transit tax referendum has created mass confusion, with the public questioning the viability of the program, the veracity of its advocates, and the motives of the corporate players and media entities that vociferously supported the plan.

Local media, AFT, some county commissioners, and spokespeople for profiteers were falsely asserting that White’s lawsuit delays spending the tax proceeds.  Nothing could be further from the truth.

At a Jan. 24 County Commission meeting, White cited the charter amendment language that debunks the false narrative promoted by AFT, the Tampa Bay Times, developers who stand to profit, and hired stooges passed off as “spokespeople.”

The amendment language states that no AFT sales tax proceeds collected in 2019 can be expended until January 2020.  All of the agencies receiving the tax proceeds must submit their spending plans to unelected bureaucrats appointed to the Independent Oversight Committee (IOC).  IOC approval is required before the agency can spend the proceeds in the following calendar year.

Importantly, White discovered that Section 11.06 was omitted from the official County Charter updated with the AFT tax hike charter amendment language after the election. This is a critical section of the amendment that dictates what must occur to spend the tax funds and when they can be spent. 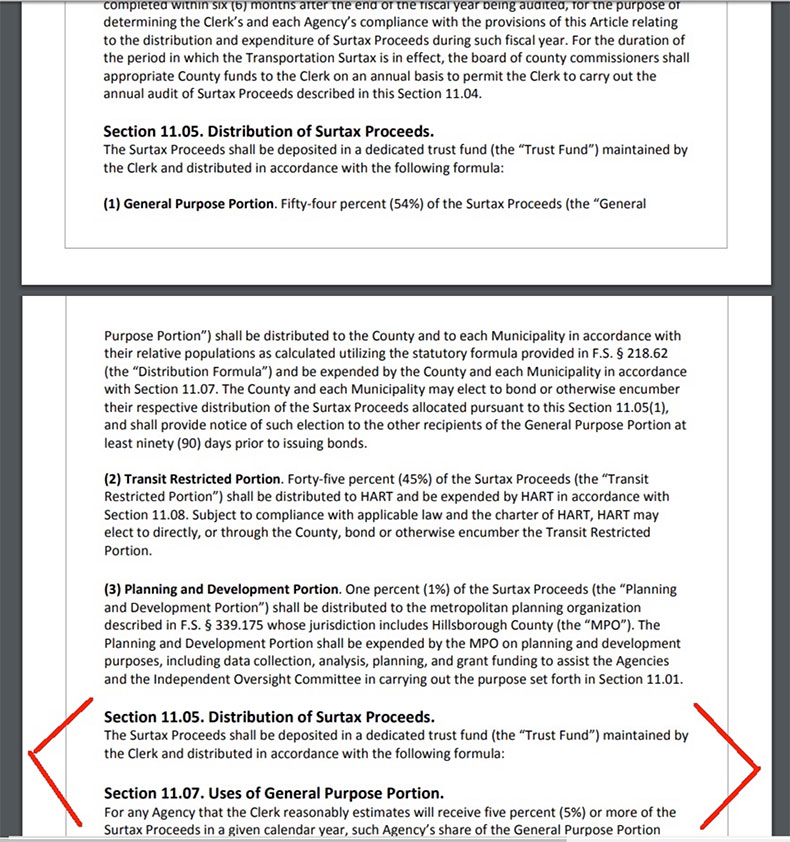 The County has since inserted the missing Section 11.06 into the official County Charter.

Many questions need to be answered.  How did the key omission occur?  Were multiple versions of the charter amendment floating around the county? Were there versions that excluded Section 11.06 or excluded any other section?

The local media buzz (see links below) over the last few weeks claimed White’s lawsuit was delaying the Hillsborough Area Regional Transportation Authority (HART) from ordering 30 buses to be delivered by December and delaying the ordering of eight electric buses at a cost of $10 million.

Democratic County Commissioners Kimberly Overman and Pat Kemp both supported the AFT tax hike and were concerned about the lawsuit delaying transit spending by HART. Kemp even wanted the county to hand HART half of the county’s Community Investment Tax (CIT) reserves, $10 million, to buy the eight costly electric buses -- for the 2 percent who use transit in Hillsborough County.

Apparently these commissioners were not concerned about much needed projects on roads that 98 percent in Hillsborough County use everyday. None of the 2019 tax proceeds being collected now can be spent on any road purposed projects until 2020.  Were the voters aware of this?

Jeff Seward, the interim CEO of HART, said its attorney, David Smith, recently informed the HART Board of AFT’s timing on the spending of the tax proceeds.

Smith sent his memo to HART on Jan. 24, 2019, immediately after Commissioner White disclosed the actual language in Section 11.06 of AFT’s charter amendment.

The memo confirms some of the powers AFT specifically gave to its “Independent Oversight Committee” (IOC) who are unelected bureaucrats accountable to no one. The IOC can approve or disapprove plans; they can delay any changes to a plan that an agency requests.

Seward said neither he nor any members of the HART Board were aware of Section 11.06 and the timing considerations.  This was confirmed by a HART Board member.

If county commissioners and others from the agencies receiving AFT’s tax proceeds were misled, misinformed or simply unaware of Section 11.06, voters were as well.

And it appears that AFT did not understand their own charter amendment.

After Seward discovered the missing Section 11.06, he found it odd that after the election,  Christina Barker, AFT spokesperson and employee of developer Jeff Vinik, wanted to know how quickly HART could put new services on the street. Of course those new services require the tax proceeds.

Willis should read his own charter amendment.

The 16-member IOC has not been created, no agency has a plan to deliver to the IOC, and no tax proceeds collected in 2019 can be spent until 2020.

If AFT does not understand its charter amendment, voters could not have as well.

But as AFT spokesperson Christina Barker publicly stated just days before the election:

"Our story is one of a few people who got together. We were writing a charter amendment over drinks."

Unfortunately, the truth is unfolding after the election.

Sharon Calvert is a conservative activist and with her husband, Mark, writes the blog Eye on Tampa Bay.

Permalink Submitted by Sharon Calvert on February 28, 2019 - 6:08am
Ahh Sharon Calvert, packed her shit from Lutz and moved to Tierra Verde circa 2016 or so.. The rest of you GOP swine should pack your shit and move to rural Georgia like the last cattle ranch did some years ago. We beat your ass in 2018 and we will continue to do so. The next seats to go are Tom Lee and Stacy White. Oh, come back to Eyz on Adamo when you want to see bulls like me with your wives in one of the play areas...CUCKS!

Permalink Submitted by Jacques LePlante on February 7, 2019 - 1:32pm
The same “Jerry” keeps showing up here defending this illegal travesty. Jeff Vinik is a disgusting, greedy entity. He perpetrated a con on the electorate to save his development.

THIS IS EXACTLY THE PROBLEM

Permalink Submitted by C Breeze on February 6, 2019 - 9:05pm
THIS IS EXACTLY THE PROBLEM with ANYTHING "tied to" the useless "Constitutional Revision Commission"..! (If the State Legislators "can't handle it",... "it" should be IGNORED altogether !

Permalink Submitted by C Breeze on February 6, 2019 - 12:37pm
AFT's "Tax Money-Pit" burden attached to Hillsborough County, that "they" WON'T be able to maintain for anywhere near the "Thirty Year Prospectus" without extreme negative effect: The resulting increasingly overwhelming TAX BURDEN, will *ultimately* fall upon ALL OF FLORIDA'S TAXPAYING CITIZENS..! This is not a new "scheme" to many other local governments in our Nation; it's merely just another version of some "Special Interest" (or another) 'promoting' a new "sports stadium" or "development idea" with only enough start-up capital to secure "naming-rights", and relying on ALL TAXPAYING CITIZENS to "foot-the-bill" for as long as it takes. (SIT EMPTOR CAVEAT / "Buyer Beware !"

Permalink Submitted by VotedBlue on February 6, 2019 - 11:22am
Apparently, "confusion reigns", with the "public losing faith", nationwide ... not just in Tampa and not just about the transit tax! Big Business, the fatcats, and totally irresponsible and corrupt political leaders are creating chaos at just about every turn.

Why do you keep defying the

Permalink Submitted by jerry on February 6, 2019 - 8:44am
Why do you keep defying the voters who voted for this who purposely kept the control away from politicians because their screwing up transportation for decades?...………...We got tired and not only voted for it but voted out those stopping it with dems replacing repubs, . …………..Until now I kind of likely White but that has greatly dimmed not following the will of the voters...………..You lost, get over it and let us build a better country transportation system we want...……..And you wonder why repubs are losing elections.