Backroom Briefing: From the Sea of Galilee to North Adams Street 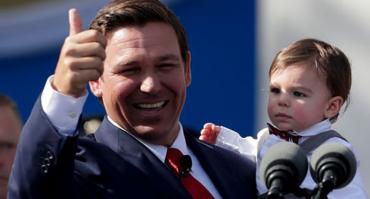 When Gov. Ron DeSantis makes his first international trip to Israel, he plans to tout Florida but also will have a chance to get a new supply of water --- and probably will do a better labeling job.

Water from the Sea of Galilee that DeSantis and First Lady Casey DeSantis saved from a past trip to Israel and used last week to baptize their 9-month-old son Mason was tossed out by a cleaning crew at the governor’s mansion.

“We’re not used to having people pick up for us,” the governor said Tuesday while in Boca Raton. “I think the folks who clean didn’t realize what it was.”

The governor noted he and his wife kept the water left over from the baptism in a nondescript Zephyrhills-style water bottle that wasn’t marked as being anything special.

In the Bible, the shores of the Sea of Galilee feature prominently in the ministry of Jesus.

“Now, we don’t have any bun in the oven right now,” DeSantis, the father of two, continued. “But I think we do need to go back to Israel to make sure we have a stock of that water on display.”

In announcing a planned trip to Israel after the 2019 legislative session, DeSantis said the aim is to increase commercial ties, boost tourism to Central Florida and explore research that could include addressing the state’s red tide outbreaks.

BURGESS STILL IN THE HOUSE

Rep. Danny Burgess is still an elected member of the Florida House --- for now --- and says he’s trying to keep busy.

The Zephyrhills Republican has held off filing exit paperwork as he continues to await Cabinet approval --- now expected Jan. 24 --- on his likely appointment to become executive director of the state Department of Veterans’ Affairs.

“I will continue to be up here for committee weeks,” Burgess, who has the backing of DeSantis for the veterans’ post, said. “I was elected to do a job, and until I’m no longer in that role I’m going to make sure I fulfill those duties.”

DeSantis’ two other picks from the state House to run agencies --- Monticello Republican Halsey Beshears to serve as secretary of the Department of Business and Professional Regulation and Coral Springs Democrat Jared Moskowitz to serve as director of the Division of Emergency Management --- submitted their House resignations last Friday.

As with Beshears and Moskowitz, House Speaker Jose Oliva didn’t see a need to assign Burgess to committees or even an office.

“It is kind of an interesting place to be in a sense,” Burgess said before the Beshears and Moskowitz resignations were made public. “We don’t have committees, we don’t have office assignments, but we do have duties, and I intend to fulfill those until the last day.”

Pulitzer Prize-winning author Gilbert King only started thinking pardons were possible for the “Groveland Four” after the Legislature in 2017 issued a posthumous apology. But King was at the Capitol last week when DeSantis and the Cabinet granted pardons for the four black men in one of Florida’s most-notorious cases from the Jim Crow era.

“You work on a book like this, you don’t know how it’s going to be received,” said King, of New York City. “You don’t know if it’s going to see anything. And then, all of a sudden, this groundswell of movement starts. A young kid is reading a book in college, starts a petition, sends it to his local representative. Next thing you know, there is a unanimous bipartisan effort to do the right thing in Florida.”

King’s 2012 Pulitzer Prize-winning book “Devil in the Grove: Thurgood Marshall, the Groveland Boys, and the Dawn of a New America,” set off a chain of events that resulted in last Friday’s pardon for the men accused of raping a white, married teenager in 1949.

“For me, it was just a book I spent five or six years writing,” King said. “For them (family members of the Groveland Four), it’s been a lifetime. A lifetime of shame, their name was dragged through the mud. The official version of the story was that their family were rapists, and at one point they (the men) tried to escape from custody and kill our fine Sheriff Willis McCall. That was the truth they were living under for decades in Lake County.”

The book, using FBI sources, details the racist past of Florida and specifically Lake County, whose current elected leaders were among those calling for the pardons.

Josh Venkataraman, in 2015 as a student at the University of Florida, started an online petition seeking to clear the four --- Earnest Thomas, Samuel Shepherd, Charles Greenlee and Walter Irvin --- after being assigned by a history professor to read the book.

“I think we see that this impacts people not just people 70 years ago who maybe were alive or directly impacted, but it affects our future and how we go from there,” Venkataraman said.

Thomas was killed by a posse in Madison County after the rape accusation. Greenlee, at 16, was given a life sentence. Shepherd and Irvin, both U.S. Army veterans, were sentenced to death.

Shepherd and Irvin were later shot, with Lake County Sheriff Willis McCall claiming the two handcuffed men tried to flee while being transported to a new trial that had been ordered by the U.S. Supreme Court due to adverse pretrial publicity. Shepherd died. Irvin survived and told the FBI he was shot in cold blood.

Gov. LeRoy Collins commuted Irvin’s sentence to life in prison. Irvin was paroled in 1968 and died a year later. Greenlee, released from prison in the early 1960s, died in 2012.

TWEET OF THE WEEK: “No specifics offered by Scott on how to resolve the current impasse between Trump and Pelosi on border security.” --- McClatchy reporter Alex Daugherty‏ (@alextdaugherty) about a press conference that U.S. Sen. Rick Scott called Thursday to address the “ongoing dysfunction” in Washington.

Just in case I have a bottle

Permalink Submitted by Claudia LeFevre... on January 18, 2019 - 11:04am
Just in case I have a bottle of water from the Jordan River, but it is 12 years old!! Keeping it in case my kids every have my grandchildren baptised.... my cross to bear!!!