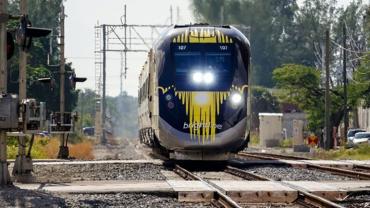 Florida’s fledgling private passenger-rail service has had some reason for holiday cheer.

Days after Brightline got an extra six months to issue $1.15 billion in tax-exempt bonds needed to expand the service from South Florida to Orlando, U.S. District Judge Christopher Cooper on Monday tossed a lawsuit by Indian River County that sought to block the “private activity” bonds.

“The court’s decision adds momentum to our efforts of connecting Orlando to South Florida. We remain focused on exploring locations for a Brightline station in the Treasure Coast and are encouraged by the tremendous amounts of support we have received in the region,” Soule said.

The rail service has now prevailed in 10 rulings in cases initiated by Treasure Coast counties as it looks to put down a second track along a 128.5-mile stretch of single-track from West Palm Beach to Cocoa and then add 40 miles of track between Cocoa and Orlando.

Indian River County, which continued to press forward in the legal fight against the rail service after Martin County reached a settlement with Brightline, may determine its next move at a Jan. 8 meeting. Indian River and Martin counties have been key opponents of the rail service, pointing to concerns about issues such as safety.

“We’re disappointed [with the ruling] but we’re discussing with outside counsel our options on how we move forward,” Kate Cotner, an assistant county attorney in Indian River County, told The Bond Buyer on Wednesday.

The county contended the U.S. Department of Transportation exceeded its authority because the railroad was ineligible for the bonds under federal tax code. Part of the argument involved the federal agency categorizing the rail project as a “qualified highway or surface freight transfer” facility.

Cooper wrote that federal Transportation Secretary Elaine Chao’s approval, in part, met “statutory requirements and was a reasonable exercise of her discretion.”

Chao’s latest extension approval --- the bonds were first approved in December 2017 with a May 31 deadline --- appears to come with a warning that there won’t be another.

Derek Kan, an undersecretary of transportation, advised Brightline that “any amount of unused bond allocation following an initial bond issuance will automatically return to U.S. DOT's remaining aggregate amount of private activity bonds, and thus be available for other eligible applicants.”

Indian River County also argued that the Federal Railway Administration violated the Administrative Procedure Act and the National Environmental Policy Act by conducting a flawed and incomplete review of the public health and safety consequences of the rail project.

Cooper also noted that the Federal Railway Administration determined that the project would have an overall beneficial effect on safety because the company would be required to introduce a variety of safety features, such as improved grade crossings.

U.S. Rep. Mario Diaz-Balart, a Miami Republican who chairs the House Transportation Appropriations Subcommittee, said in a release provided by Brightline that he intends to continue working with Chao on moving the project forward.

The bond extension gives Brightline more time to complete a separate application for a Railroad Rehabilitation and Improvement Financing loan to further cover the cost of the Miami-to-Orlando service, which has been previously pegged around $3 billion.

Brightline, which is being rebranded as Virgin Trains USA, has meet resistance from Treasure Coast officials and divided members of Florida’s congressional delegation. It currently has stops in West Palm Beach, Fort Lauderdale and Miami and is planned to run north to Orlando. Brightline is also looking to extend the service between Orlando and Tampa.

Armed with an Oct. 31 report from the state Legislature's Office of Program Policy Analysis and Government Accountability that backed financial and safety concerns expressed by Brightline critics, Treasure Coast lawmakers are again expected to pursue more state oversight of passenger rail service during the 2019 legislative session.

The report noted the state Department of Transportation hasn’t used its authority to regulate rail service at Brightline’s expected speeds of between 81 mph and 125 mph.

Before the federal government was partially shut down, a national wildlife refuge moved closer to being renamed for a Floridian considered among the founders of the modern conservation movement.

The measure (S. 3456), which would affix the late Nathaniel P. Reed’s name to the front of the 1,035-acre Hobe Sound National Wildlife Refuge in his hometown of Jupiter Island, passed the U.S. Senate with unanimous consent on Dec. 19 and two days later got backed 365 to 5 in the U.S. House. All five negative votes were from Republicans, Reed’s party. None of the “nays” were from Florida.

“For decades, ‘Nat’ Reed stood defiant against those who would drain wetlands and clear the mangrove jungles and swamps that make Florida unique,” The Everglades Foundation CEO Eric Eikenberg said in a prepared statement after the congressional approvals.

He was an environmental adviser for six Florida governors and assistant secretary of the interior to presidents Richard Nixon and Gerald Ford. Democratic Gov. Bob Graham appointed Reed to the South Florida Water Management District, where he served for 14 years.

As assistant secretary of the U.S. Department of the Interior for Fish, Wildlife and National Parks, a post he held until 1977, Reed is credited with helping craft and pass the Endangered Species and Clean Water acts.

In Florida, he played a pivotal role in the late 1960s in the successful fight to block construction of a new jetport in the Big Cypress Swamp, successfully convincing Nixon to withdraw funding for the project.

TWEET OF THE WEEK: “This is more than just an opportunity for me personally; this is an opportunity for Bay County and the entire Panhandle who are suffering after the impact of Hurricane Michael and will continue to need an advocate for economic development as we continue to rebuild.” --- Rep. Jay Trumbull, R-Panama City, (@jaytrumbull) on being chairman of the House Transportation & Tourism Appropriations Subcommittee.

...and the "black-hole money

Permalink Submitted by C Breeze on December 29, 2018 - 9:05am
...and the "black-hole money-pit" CONTINUES to grow and grow and grow..! TAKE HEED Floridian CITIZENS,.. You Will ALL be "docked" for this FIASCO, in one fashion,.. or another!

The only really bad thing

Permalink Submitted by Voted Blue on December 28, 2018 - 11:48am
The only really bad thing about Brightline is that Shouldabenafelon Scott is said to be a major investor!