Another Tampa Media Gaffe, but a Satisfactory Ending

Spectrum Bay News 9 forgot its major responsibility of fully informing the public and its viewership, not to mention any notion of fair play.

Spectrum's criteria for winnowing the mayoral debate: the amount of money raised by the candidates. The favored four: David Straz, Jane Castor, Harry Cohen and Ed Turanchik. The omitted victims of the witless parameter: Topher Morrison, independent businessman who is showing the most momentum of the seven candidates; Mike Suarez, a sitting city councilman, and LaVaughn King, the only black candidate.

After tremendous pressure from the camps of the three excluded candidates, and Hillsborough Community College (Ybor), the debate site, Spectrum relented and is allowing all the candidates to participate.

The corrected snafu had its heroes and zeroes. Let’s review:

Mining the most goodwill from the debate battle was David Straz, the billionaire banker whose philanthropy is widely known. He issued this statement on social media early Friday:

“I will not participate in any debate or forum where all the candidates are not invited. All candidates should be allowed to attend the Spectrum News 9 debate on January 9th.”

Hillsborough Community College expressed grave concern about the exclusion. Ashley Carl, executive director of marketing and public relations at HCC, had this to say:

“This is the first I have heard about this debate requirement. We are providing the venue and the sponsor is Spectrum Communications. Yes, we are concerned because HCC is a majority-minority institution that believes in inclusion.”

Later Friday, HCC’s concern was conveyed to Spectrum and no doubt played an important role in the communications company’s reversal.

From Carlson, “I have managed mayoral debates before and having all seven candidates participate is the only fair and democratic thing to do.”

John Godwin had this to say, “Straz earned a lot of respect in my book for his willingness to risk losing public exposure to stand up for proper democratic norms. At the end of the day, whether we’re running for city council or mayor, I hope we’re doing so to serve the citizens -- helping them be informed voters is certainly central to that.”

Citro, contacted through social media, “I can only add that this should be open to all candidates that have qualified.”

Spectrum is the obvious villain. It reversed course only after tremendous pressure from Straz, HCC, and threats of picketing outside the debate and disruption inside the forum.  They get no points because they opted for doing the right thing -- stubbornly.

Then there is Suarez. The city councilman with an undistinguished record and no real base played “every man for himself.”  He twisted arms at Spectrum and was allowed to participate in a debate that still excluded two candidates. His basic philosophy: to hell with King and Morrison ... I’ve got mine.

Turanchik, who never met a mirror he didn’t fall in love with, bragged that he was one of the “chosen” people, declaring that limiting the debate was the right thing to do. Turanchik’s social media post  (which appears since to have been deleted) speaks for itself: 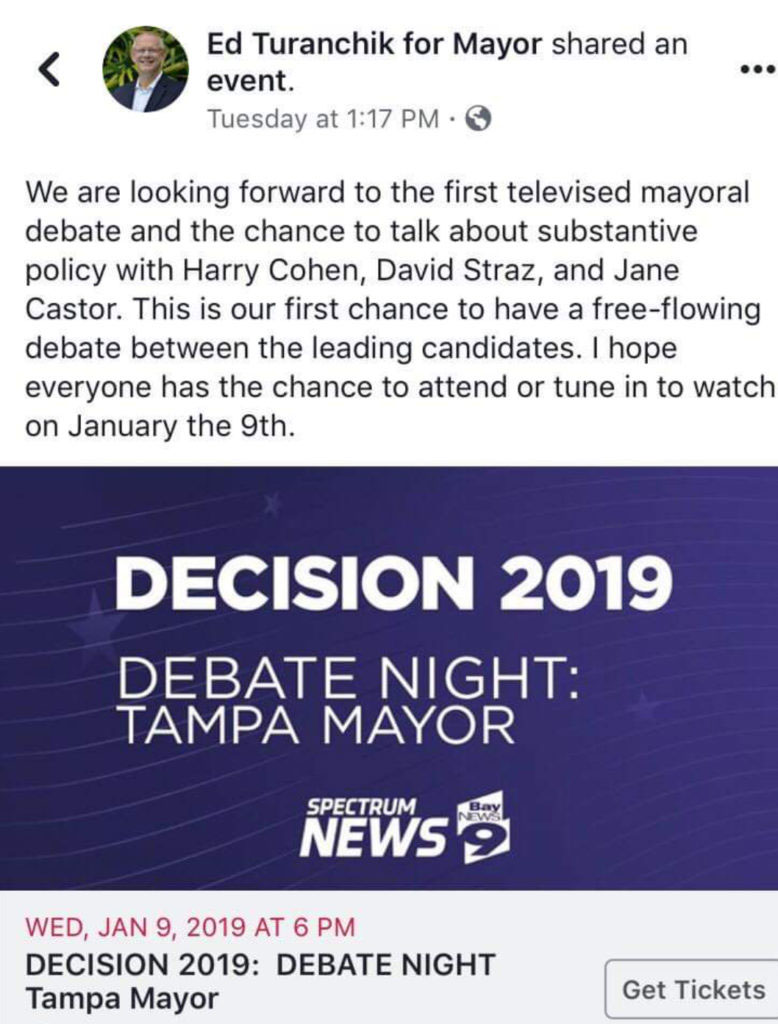 In Turanchik’s mind, the original chosen four are the “leading candidates.”  A Tampa Bay Business Journal poll, taken a few weeks ago, begs to differ: 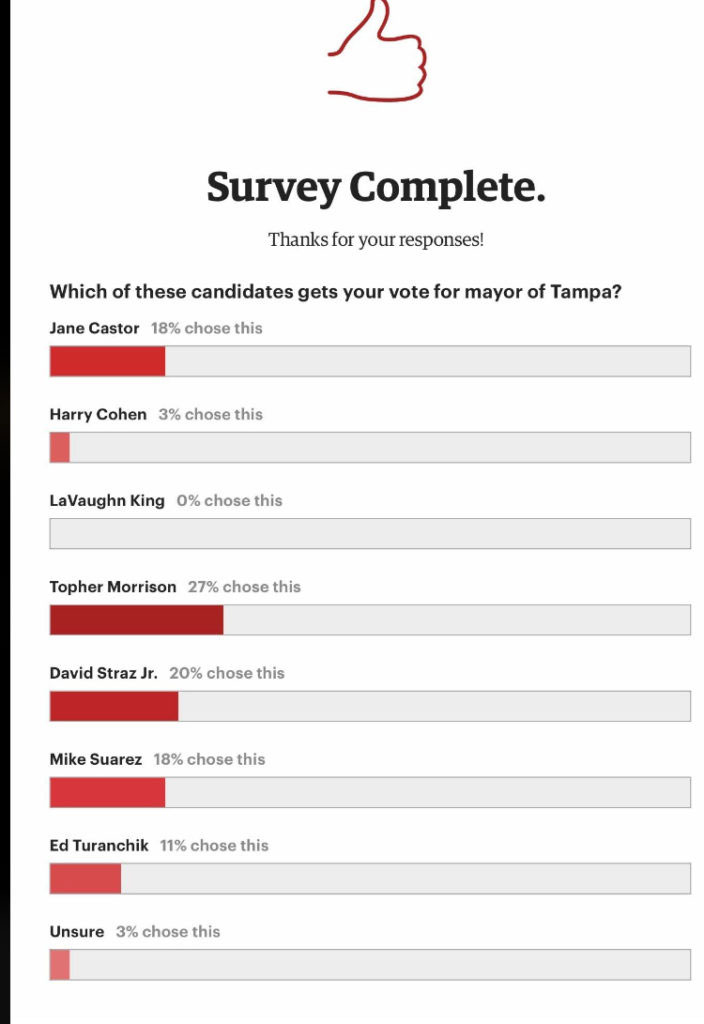 Zero, without a doubt.

Then there are Jane Castor and Harry Cohen. Tampa Bay Beat contacted them through social media asking for a response to the debate exclusion. Silence from both.

The non-partisan election will be March 5 with the two highest vote-getters clashing in a runoff.

Mike Suarez is a disgrace to

Permalink Submitted by Eileen auckencock on March 16, 2019 - 7:50pm
Mike Suarez is a disgrace to this city

Doesn’t surprise me that

Permalink Submitted by Juan Rodriguez on January 21, 2019 - 7:43am
Doesn’t surprise me that Suarez only care about himself. He is part of a group that is fighting a formal decision just because of what he wants. Just what we need in Tampa, A mayor candidate that goes against city officials. Don’t believe me, check it out for yourself. aca.tampagov.net/CitizenAccess/…. FDN-18-0000044

Interesting to hear the 3

Permalink Submitted by Joe Hernandez on January 4, 2019 - 5:18pm
Interesting to hear the 3 city council candidates quotes: Joe Citro, John Godwin, and Bill Carlson. I like 2 of the 3, but the quotes are revealing of their passion and commitment.

Before applying a 'zero' to

Permalink Submitted by Castor Supporter on December 27, 2018 - 2:55pm
Before applying a 'zero' to Castor - and especially as a media outlet, maybe research other media stories where she commented on the need for inclusion. Try hero for many reasons beyond this scenario and doing your homework first before launching. Here's the link: http://floridapolitics.com/archives/284015-david-straz-wont-participate

Permalink Submitted by Al on December 28, 2018 - 8:46am
Bleyer..,it’s obvious that post was made by “miscreant” Peter Schorsch.

I am the aithor. My above

Permalink Submitted by Jim Bleyer on December 27, 2018 - 3:00pm
I am the aithor. My above piece is more than charitable to Jane Castor. You link a pay-to-play blog that has sero credibility in Tampa Bay. This is the miscreant who operates the disgraced blog you cite: http://tampabaybeat.info/pay-for-play-blogger-continues-to-disgrace-himself-with-racist-tweet/

The article reflects the lack

Permalink Submitted by Jay Tomlinson on December 27, 2018 - 10:22am
The article reflects the lack of news professionalism in the Tampa Bay area: the lone daily is in thrall to a hedge fund caroetbagger, an electronic “investigative” reporter quits after being threatened by a corrupt public official, the new owners of our weekly would rather write about tacos and the best places to get drunk than the type of news cherished by the previous regine, and our local pay-for-play blog is a lobbyist’s wet dream...Now this, from a cable provider that should know better. Tampa Bay ripe for a real journalistic entity.