Tampa NAACP Skewers Fraudulent Transit Plan: They Will Vote ‘No’ 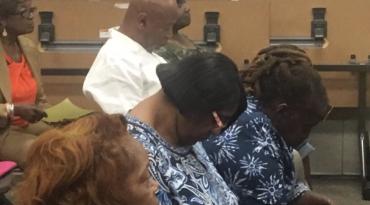 There is one group in Hillsborough County Jeff Vinik can’t buy.

The Vinik-inspired sales tax referendum came under heavy fire Thursday night when Tampa’s African American community attacked it as vague, promoting unwanted gentrification, and a bailout for development interests at the expense of the working poor.

After the meeting, NAACP President Yvette Lewis declared the referendum’s backers “can’t ram this down our throat. Our community will cast a ‘no’ vote against this regressive tax.”

For Vinik: an epic fail. Vinik’s three stooges -- Rena Frazier, Brian Willis, and Michael Stephens -- were envisioned by their boss as glib emissaries. At the end of the evening, the trio was tongue-tied and nonplused by incisive questioning and criticism over Vinik’s hidden agenda -- the bailout of his troubled Water Street Tampa development.

Tampa Bay Beat has learned from two independent sources that certain people close to the NAACP were offered cash to wheedle an endorsement of what amounts to a multi-billion dollar taxpayer swindle.  No amount of cajoling, pandering, and outright lying had any effect, either.

Local media apparently skipped the meeting. The Tampa Bay Times, primary propaganda arm for Vinik, was criticized for its unbalanced coverage of the issue which will, if passed, displace minorities residing in East Tampa.

Vinik is the de facto owner of the Times. He and a few others essentially own the financially failing media entity. Other media outlets in Tampa Bay have been compromised in their coverage of the transit scam. Tampa Bay Beat will have more on this in the coming week. Tyler Hudson, Vinik’s point man in the grossly misnamed All For Transportation (AFT) effort, sat grim faced in the audience as criticism from Tampa’s black community rained down on the plan. Cristina Barker, Mayor Bob Buckhorn’s former protegé on loan to Vinik, sat frowning and scribbling notes. Kevin Thurman, the fourth stooge and relegated to the audience, ineptly tried to explain the glaring flaws in the $15 billion, 30-year developer bailout which would make Hillsborough County the Florida county with the highest sales tax.

Stephens propagandized the regressive tax as the “alternative to nothing,” but irate audience members debunked that explanation as clearly false.

Rejection of the transit tax by a key demographic could seal the fate of the misguided referendum. The Vinik-led scheme already had stiff opposition from residents in unincorporated Hillsborough, conservatives, savvy progressives and those who didn’t just enter this life and are able to recognize blatant fraud.

City voters outside the downtown core won’t benefit from an expensive USF-airport light rail system that would be obsolete well before its completion.

“If Jeff Vinik and Frank Morsani were interested in the minority community,” they would have been paying the $30 annual NAACP dues,” observed one member of the audience.

Morsani, along with Vinik, are the main bankrollers of the tax.  The Morsani College of Medicine at The University of South Florida is the anchor tenant at the Water Street flop.

Others criticized  the All for Transportation so-called “oversight committee,” which has no allowance for average citizens who will be affected by the billion dollar scam. The committee would consist of representatives of the special interests who will reap the financial windfall from the tax.

Attendees at the monthly meeting wisely noted developers have not been paying impact fees commensurate with the benefits they reap from Hillsborough County.

Earlier in the day, Hillsborough County Commissioner Stacy White held a press conference during which he asserted the $15 billion Vinik honeypot would be overseen by a committee not accountable to the citizens of Hillsborough County.

White also noted that added road capacity, defined as widening roads or building new roads, is expressly prohibited under the Vinik scheme. Because of the prohibition, the plan would do very little for suburban commuters, he said.

The commissioner’s concerns dovetailed with those expressed at the NAACP meeting.

“This proposal seeks to embed this tax into the Hillsborough County Charter (which is like our local constitution) and it does not call for just the tax increase,” White explained. “It would give an independent committee -- whose members would not be responsible or accountable to you, the citizen -- the authority to spend the funds. Furthermore, the ballot language paves the way for this committee to be stacked with members not from the areas where the majority of these taxes will be paid.”

The name “All for Transportation” is a red herring. In a county where 1.4 million reside, it was actually a microscopic “community” of five donors who paid consultants and petition gatherers to get the transit tax hike on the ballot. A dismal $700.72 came from 10 other donors, a whopping 15 donors in all.

The referendum, with misleading and suspect ballot language, was approved for the November ballot by Hillsborough County Supervisor of Elections Craig Latimer. An auditing process that typically takes a minimum of six months was fast-tracked in 40 days -- the auditing firm in charge a history of fraudulent activity forced to change its name due to its disreputable skulduggery in Alabama.

Enjoyed the spanking that rag

Permalink Submitted by Harry on October 19, 2018 - 9:37pm
Enjoyed the spanking that rag the Tampa Bay Times receives here. You mean that radical Left wing mouthpiece cares nothing for black citizens? Color me shocked.

I am delighted that the

Permalink Submitted by Tampaguy on October 19, 2018 - 12:56pm
I am delighted that the Brothers and Sisters in Tampa / Hillsborough have been paying attention! The 'CRATS have been selling us out for far too long!

Permalink Submitted by Charlotte Greenbarg on October 19, 2018 - 12:54pm
Channel 13 exposed the fraud. It's all about rail for the stadium. Vote NO! THE “TRANSIT TAX” IS REALLY FOR RAIL TO THE STADIUM. VOTE NO ON TRANSPORTATION TAX Rays Channel 13 press conference http://www.fox13news.com/news/local-news/rays-stadium-announcement-brings-logistical-challenges-for-fans Video of the press conference…admission about rail near the end of the video https://www.youtube.com/watch?v=j7DqjIcZnXg&feature=share Rays stadium would bring logistical challenges for fans By: Evan Axelbank, FOX 13 News POSTED: JUL 10 2018 09:34PM EDT VIDEO POSTED: JUL 10 2018 10:20PM EDT UPDATED: JUL 11 2018 08:29AM EDT TAMPA (FOX 13) - The Tampa Bay Rays took their first step to building a new stadium in Ybor City with Tuesday’s announcement, but many questions remain. One of the most pressing issues is logistically getting fans to the stadium. According to team officials, 1.6 million people live within 30 minutes of the proposed site. Taking them out to the ballpark, the team acknowledges, will require an expanded Ybor streetcar, beefed up water taxis, a longer Riverwalk, a rail line from the east, and drop-off places for Uber and Lyft. "The days of a ballpark where everybody drives their car to the ballpark, that's kind of five years ago," one team official noted. Tampa Mayor Bob Buckhorn says city taxpayers should not pay for the 30,000-seat ballpark itself, but has indicated they may be willing to help with infrastructure. "We also have to recognize, that if it doesn't pencil out, and if it doesn't help with the good of the community, we need to be prepared to walk away." Once a proposed garage is built, they expect to have about 4,400 spaces close by, and 10,000 within 10 minutes. But there will be no giant lots like the current stadium in St. Petersburg, which has 7,000 spaces. There are tons of spaces within a 10-minute walk of the ballpark, we are fine with that," said owner Stu Sternberg. "That's not going to be an issue, plus, there are so many other means of transportation

Again Bleyer shows why he is

Permalink Submitted by jerry on October 19, 2018 - 11:24am
Again Bleyer shows why he is a former reporter as so right wing biased as the misleading, conflating and lies here so clearly show...………..The sad fact it is easier just to take things he writes and know that is the wrong way to go...……...And the question he refuses to answer is whom is paying him to write such BS?...………...But Jim loves the Brightline train using 1930s tech that has killed 4 so far and snarls tariff not to mention the noise day and night of using old, inefficient tech...………...

Well, he is described here as

Permalink Submitted by Anonymous on October 19, 2018 - 11:43am
Well, he is described here as "a former reporter". Maybe he got a pay raise to become a political propagandist or political public relations specialist. (?) Maybe he tried and failed make it as a legitimate "reporter". (?)

Or maybe he retired, got away

Permalink Submitted by Larry Fried on October 19, 2018 - 1:18pm
Or maybe he retired, got away from big mainstream media in bed with local fat cats like Vinik so he can finally pursue the truth. James Bleyer is a True Reporter, a dying breed.

The resistance to the so

Permalink Submitted by Anonymous on October 19, 2018 - 11:21am
The resistance to the so-called "Transit Plan" should also remain very firm in opposing ANY taxpayer-owned monies being devoted to Sternberg's stadium.