To hear the Democrats tell it, you'd think Rick Scott drove Florida education off a cliff. Have you see their latest ad, "It's School Time"?

The ad never claims Florida ever was "#1." -- have a look at it here. Instead, it says "We're #1" -- with the "#1" crossed out, replaced by "#40." So it feels as if Florida education went from #1 to #40 under Rick Scott. In tiny writing is the source, the U.S. News & World Report school rankings from August. Now, I'm sure that ranking exists in some edition and some context, but darned if I can find it.

What I did find is U.S. News & World Report's "Best States for Education" from 2018 showing Florida ranked 7th in education, and 15th overall -- "overall" taking into account factors like health care (which we do poorly on) and fiscal stability (which we excel on).

The ad also claims Scott subtracted $1.3 billion when he became governor. Well, yes he did during his first year in office. I can't deny it. And he did a whole lot more belt-tightening than that in 2011 to yank Florida out of a deep recession and get the economy moving again.

"The governor is being a fiscal hard-ass, setting us up for success and I thank the good Lord for it," the late Sen. Durrell Peaden, R-Crestview, told a bunch of us after a press conference in the Capitol rotunda in February 2012. I don't recall anyone in the group disapproving.

The ad also references a story from the Tampa Bay Times, the "Rick Scott negative press machine" -- which unearthed it (of course), mostly from teachers union sources -- to blame the governor for "critical teacher shortages." (I plan to adress teachers pay in a separate story.) For now, know that even the state Department of Education admits shortages exist and all 67 districts are trying to deal with them.

But here's the thing: Teacher shortages in special areas of teaching are a fact of life across the country, not just in Florida. States are squeezing out liberal arts in general. Teacher shortages exist in Florida as they do in all 50 states, for qualified teachers who specialize in STEM, English for speakers of other languages (ESOL) and students with disabilities. Meanwhile, elementary education postings often receive dozens of applications per job opening.

Now let's look at what changed after Scott's first spartan year. It's something the Democrats don't want you to look at, but we have to. Because, in spite of the first-year starvation diet -- yes, counting the minus-$1.3 billion -- state funding for Florida's K-12 public schools has increased by 3.2 billion, or 37 percent, since Scott took office.

With increasing graduation rates and policies that rank among the best in the nation, the Governor’s Securing Florida’s Future budget invests $21.1 billion in state and local funding for Florida’s K-12 public schools. That's an increase of $484.8 million in state and local funds over fiscal 2017-18. This marks the sixth straight year Scott has made record investments in state funding for K-12.

The increase of more than $484 million in total funds includes:

This is historic funding. What it equates to is $7,408 per student, an increase of $101.50 per student over current-year spending.

This is the highest total funding, state funding and per-student funding for K-12 in Florida’s history.

All of this information, with state comparisons and more, is readily available from the Florida Department of Education.

If you think Rick Scott has been cheap with Florida education, look at his funding proposals in each budget year. Click here and scroll to the bottom of the page. You'll find links to his previous budgets which detail his education recommendations. You may still say, "Not enough!" But at least you'll have a better idea of what really happened in seven years.

Overall student achievement? It ranks fourth in the nation, according to Education Week’s 2018 Quality Counts report. Florida outperformed other states in "every measure of achievement gains, poverty gap and Advanced Placement," which constituted 14 of the 18 comparisons, according to the report unveiled Sept. 6. 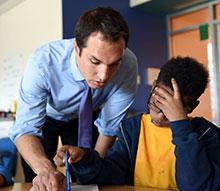 Teacher in the classroom

In 1998, Florida students scored near the bottom of the nation in student achievement in reading.

Florida fourth graders ranked 5th in the nation on NAEP 2017, outperforming the national average of public school students by 7.5 points.

Then there's the graduation rate.

Florida's high school graduation rate was in the toilet when I arrived in Florida in 1977 -- ranked among the bottom 10 states. That was not under Rick Scott. That was not under a Republican governor or a Republican Legislature. Now look at it. (See the chart at the bottom of the page). For the 2016-17 school year, the statewide graduation rate rose to 82.3 percent, a 14-year-high, plus an increase of 23.1 percent since 2003-04 and 1.6 percent over last year. Here's a breakdown:

You may also remember that U.S. News & World Report just ranked Florida higher education #1 in the nation. It happened because a Republican Legislature wanted Florida represented by quality universities and a Republican governor cared about making a college degree affordable for all Floridians.

Certainly not everything is rosy. Florida’s public schools receive some of the lowest funding of any state school system in the country. The state allocates only 2.7 percent of its taxable resources to school funding, well below the 3.3 percent average funding across all state school systems. Partially as a result, annual per-pupil education spending is only $9,737, or about $2,800 less than the typical spending nationwide.

Yet, in spite of potentially inadequate funding -- at least, by some measures -- Florida’s school system is recognized as relatively successful. For example, it is fifth in number of high advanced placement test scores of any state relative to the number of 11th and 12th-grade students in the state. Improving markedly in recent years, between 2000 and 2014, the number of high advanced placement test scores per 100 juniors and seniors climbed by 28.2 percent, the third greatest improvement of any state.

Bill Nelson's latest education ad might fool some of the people, especially the ones who weren't living in Florida 25 or more years ago when education in many districts was truly alarming. But Nelson and the Florida Democratic Party know how dishonest it is. 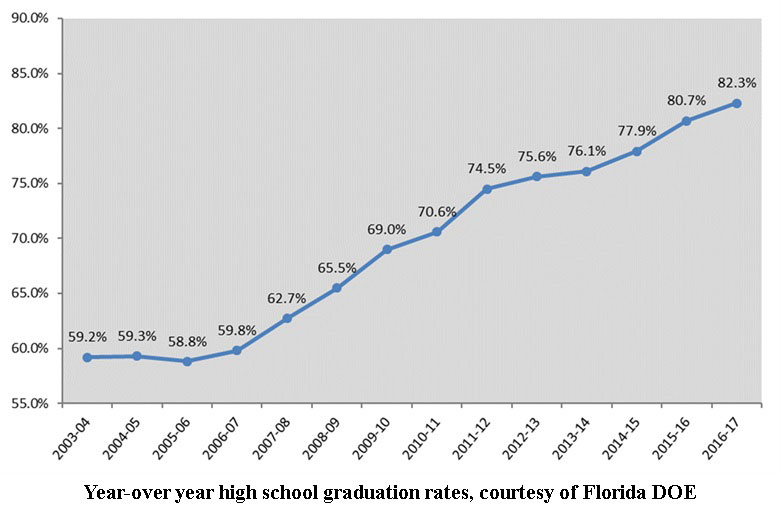 Perhaps Nancy should have

God bless you, Frank, you are

Permalink Submitted by former teacher on September 27, 2018 - 3:17pm
God bless you, Frank, you are a good and loyal party man. But it is you who is the desperate one, digging up numbers in the story to prove the TV ad is legit. Ms. Smith is right in what the story concludes. At worst, Florida is 15th overall. I read the magazine's rankings, too.

Gee, imagine that, another

Gee, imagine that, another

Permalink Submitted by Robert Warner on September 26, 2018 - 5:41pm
Ditto, Frank. Nancy - Time to do homework before you sound off.

Nancy you need to cut the

Permalink Submitted by Sally on September 26, 2018 - 11:58am
Nancy you need to cut the apron strings for Rick. He needs to grow up and be a big boy.

Permalink Submitted by BobH on September 26, 2018 - 11:31am
Political selectivity. Florida teachers are some of the lowest paid in the nation, and we're STILL teaching to pass a test. I knew more in the sixth grade, than any graduating senior today. Florida's budget awards more money to tourism, than to teaching our children, or paying our law enforcement personnel. I can make crap shine too. It's all in how you write it.

I was a teacher in Florida

Permalink Submitted by former teacher on September 27, 2018 - 3:23pm
I was a teacher in Florida for 32 years. Most of those years were under Democrat governors and Democrat legislatures. In Bob Graham's time Florida teachers pay was ranked third from the bottom nationally. Gov. Graham wanted pay raises based on merit but the union fought it so all we got were lump sum raises when the Legislature felt like being generous. It has always been a terrible system and it did not start with this governor.

Permalink Submitted by Ted Kruze on September 26, 2018 - 11:11am
Bush and Scott clearly "drove Florida education over a cliff" The Florida public schools average teaching salary is 35th out of 50 states. (It was 29th when Shouldabenafelon Scott took over!) And, now, Florida has been ranked the third-worst state in the union for teachers overall. Plus, the state is ranked 40th out of 50 in the overall quality of its public education. Scott sucks. Always has. Always will. DeSantis will almost undoubtedly be worse. Vote Blue! Vote Gillum!

Permalink Submitted by say it on September 26, 2018 - 9:22am
Perfect example of cherry picking facts... I will say some things have improved, but some have gotten worse... There are very few examples of improvement with anything the Gov. or legislature has become involved in, especially Scott. There is increased funding, but what you fail to point out is we have acquired more students in FL than any other state in the country. Once that is factored in, we have actually regressed in funding by 37%. To top it off, Red Tide Rick included all funding in the per pupil funding totals, good example, they gave 500 million to boost school security, which kids will never see, but its sure included in as per student funding in the education budget. Half of the funding won't even get to be used, because they earmarked for that dumbo sentinel program and won't let them use it to hire SRO's. So, you either get armed security or armed school staff (perish the thought) or nothing. Scott's folks are shrewd business politicians though. They are masterful at presenting data in a way that makes them look like superstars, but you never get the whole picture. There was a story in the panhandle a couple weeks ago about students in high school that had 4 different teachers in 4 straight years for the same subjects. Why? because even Alabama and Mississippi pay $5,000 more to start than FL. That is just shameful for our kids and our futures. These carpetbaggers don't care, because they are either all rich retirees, or will be soon. They don't care about FL for regular people from their beachfront properties. That is the real difference in these elections, do you want Floridians who truly want to make things better, or out of state retirees that are trying to preserve their wealth and make more?

Permalink Submitted by Carte on October 20, 2018 - 11:12am
I want illegal immigration resolved so we can take care of our own. Democrats flatly want open borders and are a no show in Congress the last 2 yrs. Not ine of them voted for the succesful Tax cuts and Jobs Act. It cost more to educate illegals than our own.

Permalink Submitted by jerry on September 26, 2018 - 8:25am
ROTFLMAO!!!! Nice shilling Nancy...………….. Facts say otherwise and no amount of selective facts, propaganda from you changes it...………….And November is coming fast they'll let you know what they think ;^)……………….And Nancy's home is now an algae smelling mess thanks to those repubs she refuses to say anything honest about!! …………..How's your tourist season going to be Nancy?...………...Likely like the last time, very bad and repubs didn't do anything since...……………... In fact made it worse, bought and paid for by big sugar, ag, developers, like you.

Permalink Submitted by C Breeze on September 26, 2018 - 7:04am
Unfortunately, today's Democrats are unable to comprehend multi-syllable words, (much less a complete sentence with more than just one "BIG word") Nancy. But your efforts are duly noted by the rest of us...

So says the guy with two one

Permalink Submitted by Anonymous on September 26, 2018 - 11:14am
So says the guy with two one-syllable names.