Transit Proponents Give No Details of $16 Billion Tax Hike

Hillsborough County voters should know what they’re voting on before they vote.

The Tampa Bay Times begins a recent editorial about the Florida Supreme Court striking down Amendment 8 from the November ballot:

“Voters should know what they’re voting on, which is why the Florida Supreme Court was entirely correct to strike the deviously worded Amendment 8 from the Nov. 6 ballot.”

We agree. Voters should not be forced to rely on any deviously worded amendment that could deceive them.

So, what about the massive transit tax hike charter amendment on the November ballot?

There is no transportation plan and not one project referenced in the ballot summary language or in the five pages of the All for Transportation (AFT) tax hike charter amendment. AFT did not provide the voting public any specific projects that the 30-year, massive 14 percent transit-tax hike actually funds.

Yet, it has been reported in local media that it is funding the Metropolitan Planning Organization’s 2040 Long Range Transportation Plan (LRTP).

“The priorities are based on a long-range transportation plan that was developed four years ago by the Hillsborough County Metropolitan Planning Organization, based in part on responses to a survey of more than 6,000 people.”

“Based on responses from the to the Imagine 2040 survey, most respondents agreed that the programs should be funded at medium to high levels, and that additional funds should be spent in KES areas with larger employment bases, like Downtown Tampa and the USF area, as the best way to improve Hillsborough County’s transportation system by 2040.”

Is spending additional transportation funds (e.g. tax hikes) in the City of Tampa the best way to improve transportation in Hillsborough County? What about unincorporated Hillsborough, traffic-congested Brandon and rapidly growing South County?

While the 2040 plan is still in place, it is now quite outdated. Since it was formulated, the county commissioners created a 10-year transportation funding plan.

Back to the Times editorial about Amendment 8. Editors also wrote this:

"The word 'charter' did not appear in the amendment text, title or summary."

Neither does the word "rail" appear anywhere in AFT’s charter amendment. It is not in the text, title or summary of the transit-tax-hike ballot language. It is nowhere to be found.

But ... costly rail is all through the MPO’s 2040 LRTP. It is included in the MPO’s one-cent funding scenario. Interesting that we find the use of one cent vs. 1 percent to describe a transit tax hike in the MPO documentation and AFT’s ballot language. Is that coincidental? Previous proposed transit-tax-hike ballot language used percent terminology, because that is how the transportation surtax is referred to in state statute. 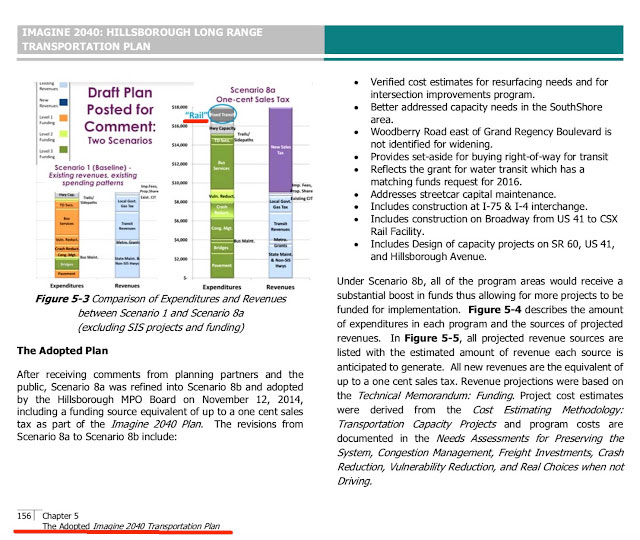 Beth Alden, executive director of the Hillsborough MPO, has told us the MPO will include rail again in its 2045 planning they recently began. The MPO must be counting on AFT’s transit-tax hike passing in November so its 2045 LRTP will match it.

Ironically, when the MPO was beginning its 2040 plan, it surveyed registered voters in Hillsborough County, which revealed this:

“ … they [registered voters] perceived the 2010 referendum as a 'rail' referendum with nothing for roads; that the projects to be funded were not clearly defined.”

As we stated previously, no transportation plan is referenced, and not one project is identified in the AFT tax-hike charter amendment language, ballot title, text or summary language.

The Times editorial about Amendment 8 ends with this:

"Those who so firmly believe in charter schools should be more than happy to let them appear on the ballot by name, not by subterfuge [deceit or deception]. ... Instead, voters were nearly left with no context to suss out the schools that shall not be named until the Florida Supreme Court made the correct decision on behalf of clarity and candor.

The Times wanted clarity and candor regarding Amendment 8.

When contacted, the Times stated reporters were told by someone from both the MPO and AFT, when the petition drive began in June, that AFT’s transit tax hike was funding the 2040 LRTP. When we subsequently asked the Times who at the MPO and AFT told them that, we did not get a response. It is logical to assume it was Beth Alden from the MPO, because she was quoted in the Times' June article.

Does the AFT massive tax hike fund the MPO’s 2040 Long Range Transportation Plan or not?

If so, why did AFT NOT disclose that anywhere in its ballot title, text or summary language and/or reference it anywhere in the charter amendment?

Why would AFT keep such information secret?

The MPO confirmed voters want to know clearly defined projects that any additional funding would be spent on.

So, where is the clearly defined list of projects that will be funded by AFT’s 30-year 14 percent transit-tax hike? Voters want to know this information BEFORE the election.

This is especially important with this massive tax hike, because the five pages of tax-hike regulations prohibit and greatly restrict changes -- even when there is failure or an economic downturn. Taxpayers are stuck for 30 long years.

The Times wanted clarity and candor regarding Amendment 8 and they applauded the remedy of the Florida Supreme Court striking Amendment 8 from the ballot.

The Times should hold AFT’s charter amendment to the same level of accountability, clarity and honesty to ensure voters are not subject to any ballot language deceit and deception.

If AFT cannot be honest with the voting public about specifically what its $16 billion tax hike is funding, the remedy for voters is to vote “No.”

Sharon Calvert is a conservative activist and with her husband, Mark, writes the blog Eye on Tampa Bay. This story was reprinted with permission from Tampa Bay Beat.

Permalink Submitted by Ted Kruze on September 21, 2018 - 11:01am
Hopefully, there's a BIG voter turnout in Hillsborough and the voters resoundingly VOTE "NO"! Same goes for the Tampa City Council and Hillsborough County Commissioners in responding to MLB's and Sternberg's 'begging'!

I would not vote on any addt

Permalink Submitted by Bob Shanks on September 21, 2018 - 9:03am
I would not vote on any addt'l tax. Transit should be funded by the Feds and the State. It is long overdue for Floriduh to do some something about its 3rd world transit system. It is an embarrassment that countries with 5 million people have better transit than this state, supposedly in the top 20 in economies of the world...what a joke.

Of course they don’t mention

Permalink Submitted by Charlotte Greenbarg on September 21, 2018 - 8:00am
Of course they don’t mention rail. It’s toxic. So they lie by omission. Vote NO on the transit tax in November