In the battle over immigration policy, it's easy to overlook how much Florida agriculture needs an uncomplicated guest farmworker program. We're talking about am industry in this state that contributes $8 billion to the U.S. gross domestic product. Yet, it's suffering critical labor shortages as Congress makes up its mind how much it can help.

Frankly, I didn't realize how caught up in the Trump administration's crackdown on immigration Florida agriculture has become until I dug into New American Economy's (NAE) research on immigrant workers. NAE is the bipartisan research organization that released its Cities Index on Monday to coincide with Citizenship Day. The national assessment ranked Miami 29th overall as a place for immigrants to feel welcome and to have an opportunity to experience the American dream. But its website provides so much more than what's going on in cities.

The health of our agriculture industry is tied directly to immigration. The numbers prove it.

Farmers keep telling us: Few, if any, American workers are willing to take the most difficult, low-level farm jobs -- particularly the hand-harvesting roles required to pick fresh fruits, sometimes while perched on ladders wearing bags around their necks to free both hands for picking.

They tell us we need a more farm-friendly guest farmworker program. The H-2A visa, the only agricultural visa currently available to U.S. farms, is too expensive and cumbersome to work for many U.S. growers. Nevertheless, Florida farmers try to work with it.

“Where would we be without H-2A? We’d be out of business,” Steve Johnson, owner of a wide-ranging harvesting company based in Wauchula, south of Tampa, told U.S. News & World Report in January. Of the 900 workers he employs to gather berries, citrus and onions, 90 percent are in the program.

There are an estimated 25,000 visa holders in Florida, or about a quarter of the roughly 100,000 eligible crop workers. (Plant nurseries account for another 100,000 who can’t apply because their work is continuous, not seasonal.) And the number of H-2A applications is rising.

“The program nationwide will continue to grow exponentially, and that speaks not necessarily to the greatness of the program, but to the need to gain an accessible workforce for our agricultural producers. That’s the best avenue and the compliant, legal way to get those workers,” said John-Walt Boatright, national affairs coordinator for the Florida Farm Bureau Federation. 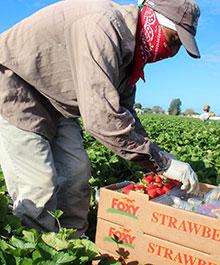 Yet no one is delighted with H-2A. Farmers chafe under extensive regulations and paperwork and complain it’s too expensive. “Our producers find it incredibly difficult and cost-prohibitive to participate, and yet in order for them to produce their crops, they have to have a workforce,” Boatright said.

Late last year U.S. Rep. Bob Goodlatte, R-Va., created the AG and Legal Workforce Act. It was supposed to replace the creaky and frustrating H-2A agricultural guestworker program with something known as H-2C, a program to ensure America’s farmers and ranchers had access to a reliable workforce. H-2C was going to be available to both seasonal and year-round agricultural employers, providing a generous visa allocation and much-needed flexibility to minimize disruptions in farm operations, eliminate regulatory burdens, and contain effective accountability and enforcement provisions. Among the bill's original cosponsors were Florida Reps. Neal Dunn, Dennis Ross and Ted Yoho, all Republicans. More than 200 agricultural groups, including the American Farm Bureau Federation, loved the program.

But there was one problem. A big one if you live in California. It carried an E-Verify provision most Democrats couldn't go along with.

Tom Nassif, president and CEO of Western Growers, an association representing growers of more than half the produce in the U.S., worked hard to kill the bill. And he succeeded -- by delaying it. He told Dan Wheat of Capital News he sent an email to hundreds of his members July 13 thanking them for lobbying against the revised Ag and Legal Workforce Act of House Judiciary Chairman Goodlatte.

“We have been informed that the U.S. House of Representatives will NOT vote on legislation next week that would impose mandatory E-Verify (electronic verification of employment eligibility) with no fix for our existing workers,” Nassif wrote in mid-July.

“Furthermore, our allies believe this legislation will likely not be voted on before the August recess at all, due to our resolve. Those of you who took the time to call members of Congress made the difference. ...

“It is our hope that through our strong collective voice, we can persuade the next Congress to get serious about an ag immigration fix that works for all farmers and all regions.”

Nassif argued that while H-2C is an improvement over H-2A for growers using the guestworker program, H-2C is not workable for many California growers who rely on domestic workers, many of whom are illegal.

“The bill would require all of those workers -- and we could have 400,000 to 500,000 here in California -- to stand up and say we are here illegally, so deport my spouse and convert me to a guestworker,” Nassif said. “Some of them have been here for decades. Our growers tell us workers tell them they would rather continue living in the shadows than convert to H-2C. So we can’t support a bill that would cause us to lose our workforce.”

Nassif said he’s not asking for citizenship for illegals but legal status for them to transition to H-2C without returning to their country of origin.

Farmers need a champion. A new bill likely will be another year in the making, leaving farmers in Florida and elsewhere desolate.

Because agriculture is intertwined with so many other industries in our economy -- transportation, packing, and irrigation, for example -- a shortage of farm workers hurts the U.S. economy more broadly. NAE estimates U.S. growers would have produced $3.1 billion more in fresh fruits and vegetables per year by 2014, had farm labor not been an issue.

Here's another shocker: NAE claims in recent years there's been a dramatic increase in the amount of fresh fruits and vegetables Americans eat that is imported. True, many factors play into this phenomenon, but researchers estimate labor shortages alone explain 27 percent of the market share decline experienced by U.S. growers from 1998-2000 to 2010-2012. Had growers maintained their hold on the domestic market, an estimated 89,300 additional U.S. jobs would have been created by 2012.

According to New American Economy:

To repeat, the H-2A visa program, the only visa currently a vailable to bring in temporary agriculture workers, forces farmers through a lenthy, red-tape-filled application process, only to receive their laborers late, resulting in crop loss.

In case you've forgotten what it is we're taking care of -- consider these big-picture numbers from the Florida Department of Agriculture and Consumer Servics:

Just another reason -- and, frankly, a pretty big one -- for Floridians to get their toe behind Congress.

How about we let the free

Permalink Submitted by Frank C. on September 19, 2018 - 1:38pm
How about we let the free market solve this problem? Government is the problem and more government interference is not the solution.

In my opinion, these

Permalink Submitted by Ted Kruze on September 19, 2018 - 10:59am
In my opinion, these immigrant farm workers COST the state (taxpayers) in social services and other ways W-A-Y more than their work produces for the state. Plus ... TOTAL agricultural output in this state accounts for only 10% of the state's GDP ... not statistically very significant. And, since the farmers' workforce is 78% immigrant, agriculture actually provides next to NOTHING for American workers. Agriculture in this state is not worth the list of problems it creates!

Make it a one page

Permalink Submitted by Done on September 19, 2018 - 10:37am
Make it a one page application w/ E-verify and allow the whole family access during the Visa. Illegals are not eligible for any Fed bennies anyway, except WIC, so what does it matter? Make it work for everyone and you will have a viable solution...today.

How about we let the market

Permalink Submitted by Claude Kirk on September 19, 2018 - 8:41am
How about we let the market sort this issue out. We are gonna build the wall, we never stated we will not let in guest WORKERS, we will exclude guest freeloaders. Again the market in the greatest nation on the planet will then sort the "who's gonna pick the 'maters" issue without government involvement whatsoever. YOU ARE WELCOME!!!

Permalink Submitted by C Breeze on September 19, 2018 - 7:36am
California is the recalcitrant "stepchild" in EVERY "issue" ! California has COMPELLED this Nation too reject their ALWAYS resistant nature... Florida no longer cares about California and its "tail wagging the dog" demands,...(too the exclusion of our STATE, as well as too THE REST of our ENTIRE NATION ! ! ! )

Should have thought about

Permalink Submitted by Robert Warner on September 19, 2018 - 7:25am
Should have thought about this before electing Trump - and his Tea Party supporters in Congress, especially those from Florida.